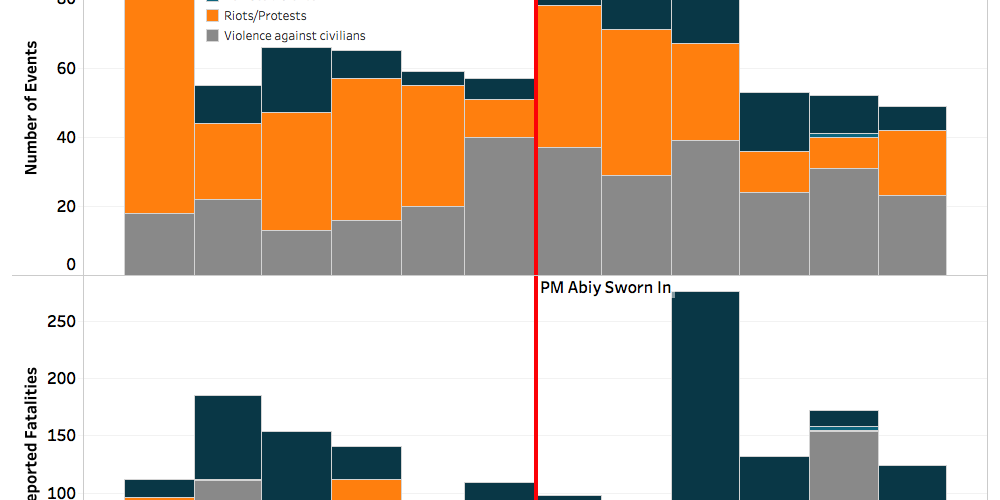 The swearing in of Abiy Ahmed as Ethiopia’s Prime Minister on April 2, 2018 has been regarded as a watershed moment in the country’s political development; Abiy took power after his predecessor, Hailemariam Desalegn– who had been in office since 2012– unexpectedly left office. Hailemariam’s time in office was marked by states of emergency and widespread protests. PM Abiy’s brief tenure thus far has been marked by a dramatic shift in the country’s rhetoric, an increased tolerance for political dissidents, and a thawing of tensions between Ethiopia and Eritrea over a long-standing border dispute (the Guardian, 8 July 2018). However, the change in leadership has not put a halt to political violence in the country.
There may have recently been a greater tolerance for protests and a decline in the number of demonstrations in Oromia, but in the same time period, long-standing conflicts have flared and intercommunal violence in the country has been on the rise. These are potentially encouraged by regional and local power-brokers who are eager to advance their own interests in this period of political flux. Selecting Prime Minister Abiy may have helped quell the crisis in Oromia and contributed to a more restrained security sector, but Ethiopian politics remain contentious. A number of local flashpoints for intercommunal violence — particularly border disputes between Oromia and Somali — are ignited, suggesting that Ethiopia can anticipate continued instability. .
Trends in Violence since April 2018
Government Tolerance of Protest
Though Abiy’s tenure has been heralded as a pacifying influence, the number of violent events and protests have actually increased by over 8% in the 6 months since he has taken office, relative to the 6 months prior (from 388 to 420 events). This has corresponded to an increase of over 48% in the number of reported fatalities from 644 fatalities in the 6 months before Abiy took office to 954 fatalities from April to October (see graph below). 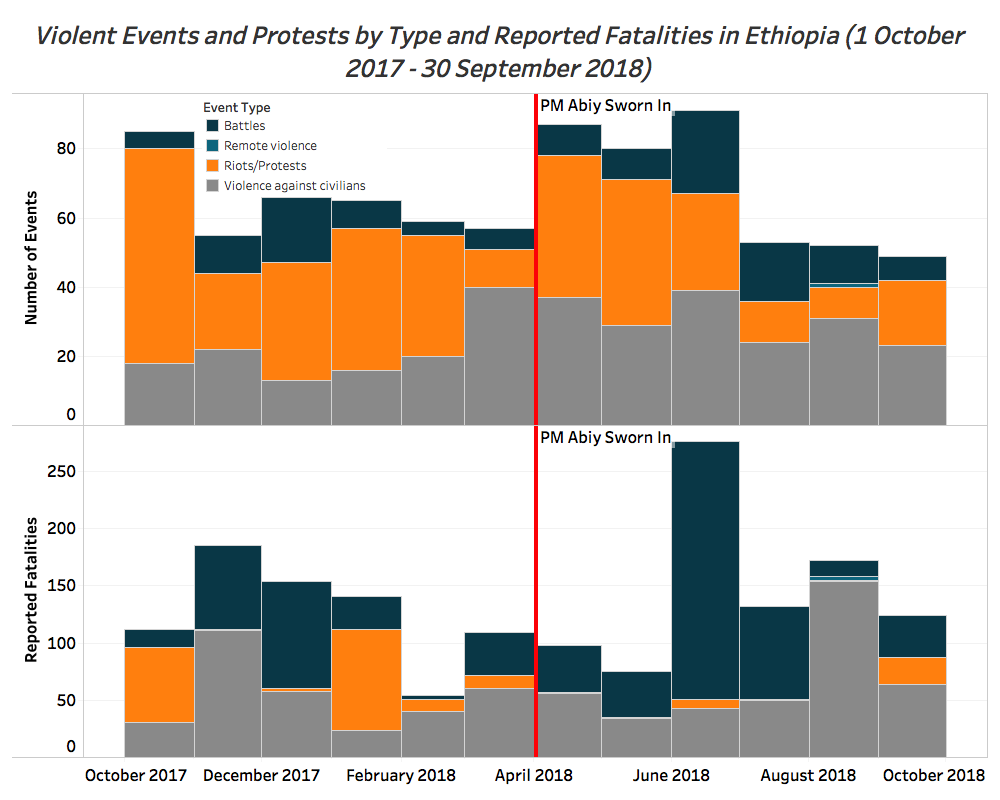 In April (as Abiy was being sworn in), 33 protests were reported, while March experienced 6; but riots have been declining (27 riots are recorded between October 2017 and April 2018,  but only 7 in the six months since Abiy was sworn in). The surge in protest activity in June 2018 is a result of the lifting of the State of Emergency which included a ban on public protests (Garda, 19 February 2018). Perhaps most strikingly, there has been a remarkable decline in the the number of confrontations between demonstrations and state forces — a decline of over 56% in confrontations between rioters and state forces and a decline of over 82% in confrontations between protesters and state forces.  A decline in reported fatalities has followed: since Abiy took office, there have been 6 reported fatalities associated with military-rioter confrontations, down from 137 in the 6 months prior to Abiy’s swearing in (an over 95% decline) and 27 reported fatalities from military-protester interactions (a 67% decline). This sharp decline suggests a shift in government policy away from using lethal force against peaceful protesters — though the total proportion of incidents in which peaceful protests are shut down violently (roughly ⅓) has remained unchanged.
Geographic Shifts in Violence and New Forms of Violence
Since PM Abiy has been sworn in, the geography of violence in Ethiopia has undergone a change: violent events have moved away from the capital and western Oromia. One reason for Abiy rise was the persistence of protests in the Oromia region, which had been severe enough to trigger the declaration of a State of Emergency on a number of occasions (BBC, 16 February 2018). Since Abiy has been in office, the protests in that region have petered out. Between October 2017 and April 2018, there were 264 violent events in Oromia, comprising 68% of violent events total; since April, there have been 199 events in Oromia, constituting 47% of events — a decline of over 24%.
As events in Oromia, and particularly western Oromia, have declined, activities have increased dramatically in the Somali region. This is especially apparent near the border with Oromia. Between October 2017 and April 2018, there were 5 events in Somali region; since Abiy has taken office, that number has risen to 70 events.  Much of this increase is driven by protests, which constitute 57% of events in the post-Abiy period in the Somali region. The most frequent type of violent event in the Somali region since Abiy has taken office are confrontations between state forces and civilians (at 11 reported events).
This violence appears to be an escalation in the long-standing dispute near the border between Oromia and Somali (OpenDemocracy, 22 October 2017). This conflict is often portrayed as been driven by competition over resources between pastoralists in Somali and farmers in Oromia but, particularly since 2017, is a result of political dynamics and competition for power  (BBC, 18 September 2017). Several referenda have been held to determine which region border communities belong to, however formal demarcation has never occurred and the border remains an important regional symbol that has been used to mobilize violence (29 September 2017). 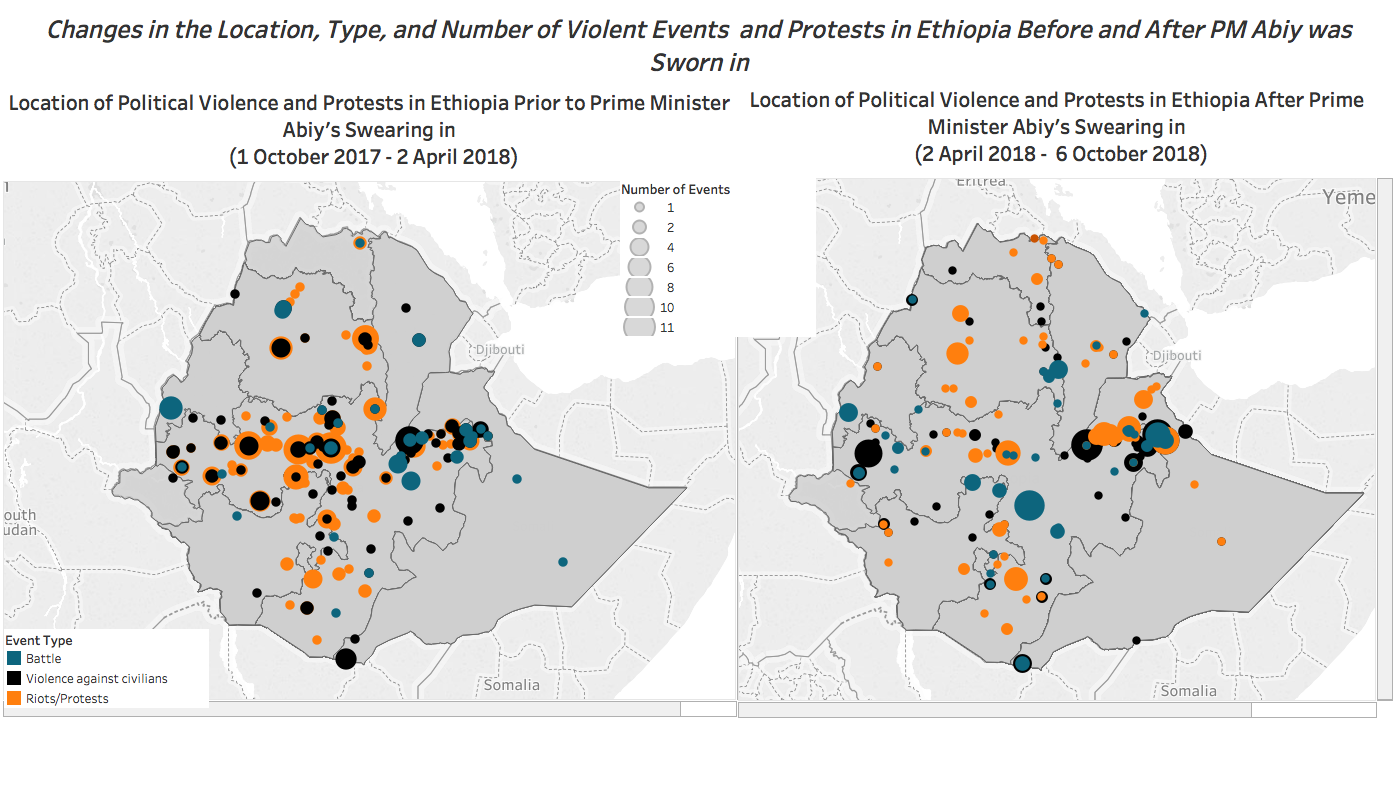 Violence in the Somali region has often involved the Liyu Police (‘Special Police’) a paramilitary force, both engaging in violence against civilians and in a high-profile clash with the federal military in August, which are closely tied to the former president of the Somali region, Abdi Illey (AfricaNews, 10 August 2018). As illustrated below, there has been an increase in the number of violent events associated with the Liyu Police paramilitary forces in the months following Prime Minister Abiy’s swearing in, as well as a shift towards their use of violence against civilians. The Liyu Police have been accused of a number of human rights abuses and have faced criticism from groups like Amnesty International for engaging in violence against civilians (The Guardian, 10 January 2013). Since Abdi Illey’s arrest in late August, the activities of the Liyu Police have dropped dramatically (Associated Press, 27 August 2018).

The instability associated with the ‘Liyu Police’ allude to the existence of subregional power-brokers in Ethiopia that are seeking to consolidate their power and advance their own interests in this period of political flux. However, discontent with the status quo appears to extend beyond regional security forces; on October 10th, hundreds of (uniformed, but unarmed) Ethiopian soldiers marched to the Prime Minister’s office to demand higher pay (Africa News, 10 October 2018). Though details about the event are sparse, it is clear that the march took PM Abiy’s administration by surprise and that the government was threatened enough to shut down the internet for several hours  (Africa News, 10 October 2018).
The political transition that made Abiy Prime Minister is in many ways ongoing; the constituent parties of the ruling Ethiopian People’s Revolutionary Democratic Front (EPRDF) held their party congresses in early October and implemented a number of rhetorical and leadership changes (Borkena, 2 October 2018).  During the party congress for the EPRDF, the party approved plans to professionalize and depoliticize the state’s security sector, a process which entails removing the current heads of national security agencies, who are members of the party’s central committee (Africa Intelligence, 12 October 2018). The ethno-regional parties that constitute the EPRDF are still attempting to position themselves favorably in the new era of Ethiopian politics — and the members of those parties are also competing for influence. 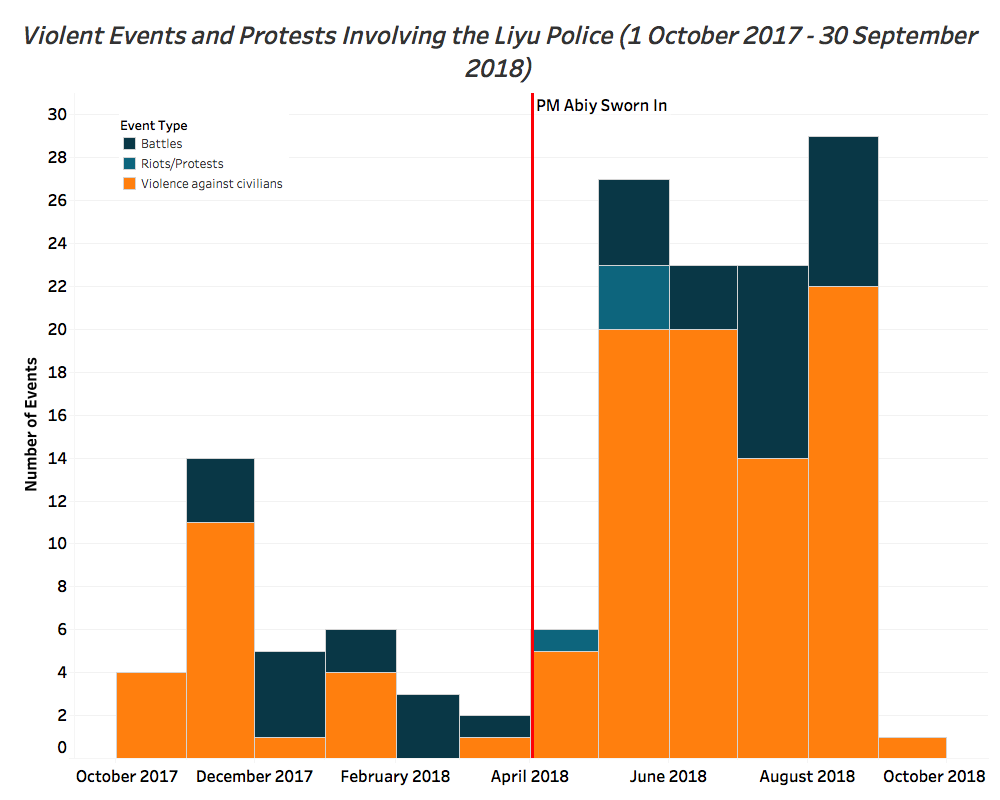 In addition to the geographic shift in violence and the intra-party political competition, there has also been a shift in the types of groups fighting one another, towards increased inter-communal conflicts. There has been a marked increase in intercommunal violence since April 2018, concentrated largely in Oromia, Southern Nations, Nationalities, and Peoples’ (SNNP) Region, and Amhara. Between April and October 2018, there were 43 violent interactions between communal militias (an increase of over 168%); over that time period, such intercommunal violence accounted for 10% of the overall number of violent events. Violent events between communal militias and civilians have also been on the rise since Abiy took office, rising from 1% of events in the six month period prior to Abiy’s swearing in to 5%.The prevalence of this violence suggests that local flashpoints over access to resources and mobilization around ethnic lines is on the rise since Abiy took office. Mobilization along ethnic lines during this period of political change may be a result of the Ethiopian government’s system of ethno-federal regionalism; emphasizing ethnic identity may be a way for ethnic groups and ethno-regional politicians to signal their strength and jockey for influence (AfricanArguments, 2 October 2018). Not only is this type of violence becoming more common, it is becoming more lethal. Between October 2017 and April 2018, the average intercommunal battle resulted in 5 reported fatalities; since Abiy was sworn in, that has risen to more than 8 reported fatalities per event.
Prime Minister Abiy has overseen a period of rapid political reform in Ethiopia; the pattern of violence in the country suggests that leadership changes in the Ethiopian People’s Revolutionary Democratic Front (EPRDF) have resulted in, for now, a more placid Oromia and a less lethal response to peaceful protest. The durability of this arrangement remains to be seen. Furthermore, since Abiy took office, there has also been a surge in violent activities in the country’s south, suggesting that a change in EPRDF leadership is insufficient to ensure an end to violence throughout the country. The insecurity and political instability of this transition period has catalyzed competitions for power and influence that often manifest in violence. Regional power-brokers and politicians have leveraged ethnic identities and sub-national armed groups to advance their position during this period of political flux.

Dr. Dan Watson is Senior Researcher for Sudan and South Sudan at ACLED and has been with the organization since mid-2018. He oversees coding, research, and analysis on the two Sudans. He has an MA in Conflict, Development and Security from the University of Leeds, and a PhD in International Relations from the University of Sussex, where he also works.