The ACLED dataset contains nearly 18,000 events of mob violence as of March 2019. A ‘mob violence’ event involves one or more groups of unorganized, unarmed but violent individuals engaging in political disorder. ACLED defines a mob, in line with the Oxford dictionary, as ‘a large crowd of people, especially one that is disorderly and intent on causing trouble or violence.’ Mob violence, given its spontaneity, specifically involves activity coded as ‘rioters’ active outside the context of a demonstration, and often occurs where dissatisfied communities engage in purposeful, if disorganized, destruction directed at specific groups, property, or individuals perceived as causing harm to the community. Mob violence is currently coded as a sub-event type under the ‘Riots’ event type. However, mob violence does not look the same everywhere, and manifests differently according to political context. Mobs might form in order to pursue vigilante justice against a group or individual or to attack members of another communal or political group. Mob violence can manifest as property destruction, lynching or attacks (including lethal attacks), or clashes with other (armed or unarmed) groups.
Most mob violence events recorded by ACLED have occurred in South Asia and Africa. Since 2016, more than 5,500 mob violence events have occurred in South Asia alone, the majority of which took place in India. In Africa, mob violence occurs throughout the continent, though it is especially concentrated in Eastern Africa. The differences within the mob violence sub-event type – including differences in the identities of those targeted, and the function that such violence serves –  are easily apparent in comparing data across these regions in the past two years.
The targets of mob violence vary between South Asia and Africa. Across both regions, the three groups most commonly targeted are civilians, other rioters/mobs, and state forces — yet mob violence targets different groups across regions. In South Asia, about 65% of mob violence events target violent groups, such as other rioters/mobs or state forces. Only a little more than a third of mob violence events are perpetrated against unarmed civilians in South Asia. Across Africa, on the other hand, nearly half of all mob violence events are against unarmed civilians. Mob violence is more commonly used as a tool to repress, target, or punish unarmed groups and civilians in Africa, whereas in South Asia it more commonly manifests as clashes between rioters/mobs and other violent groups.
Even when narrowing analysis to mob violence against civilians specifically, there are vast differences between targeting patterns in South Asia and in Africa. In Africa, most civilians targeted by mob violence have no recorded affiliation with a specific organization, political party, or identity group. On the other hand, civilians targeted by mob violence in South Asia largely have specific affiliations, in particular with political parties, indicating the prominence of mob violence as a form of political competition in Southern Asia. 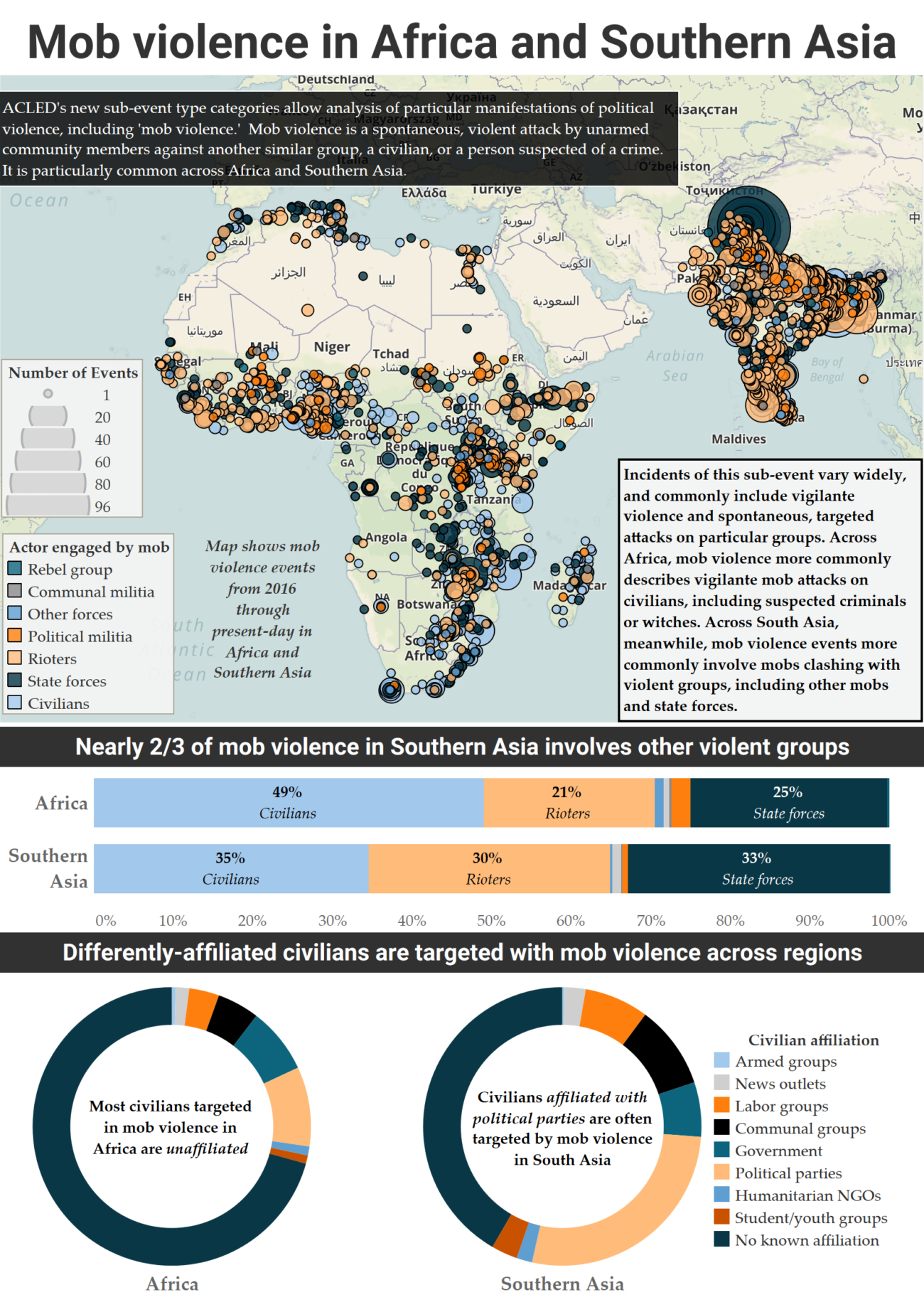 The Armed Conflict Location & Event Data Project (ACLED) is a disaggregated conflict analysis and crisis mapping project. ACLED is the highest quality, most widely used, realtime data and analysis source on political violence and protest in the developing world. Practitioners, researchers and governments depend on ACLED for the latest reliable information on current conflict and disorder patterns.
19 March 2019
Share
TweetShare on Twitter Share on FacebookShare on Facebook Share on LinkedInShare on LinkedIn