The major developments in Africa during the past week included insurgency in northern Rwanda and southwestern Niger, protests responding to the Ethiopian Prime Minister’s receipt of the Nobel Peace Prize, and pre-election and Islamist violence in Mozambique.

Militant activity spiked this week in Niger, including a series of attacks by the presumed Islamic State Greater Sahara (ISGS) in Tillabery. The group conducted an ambush and killed two of the security forces of Niger on 6 October, in the southwestern Dosso region. The recent engagement in this region suggests insecurity is spreading in Niger, as Dosso has rarely been a site of conflict in recent years.

Meanwhile, in Rwanda, an offshoot of Democratic Forces for the Liberation of Rwanda (FDLR), the Rally for Unity and Democracy (FDLR-RUD), targeted civilians in the Northern province of the country, with its previously unknown Uranana faction. On 4 October, the group attacked Kinigi town of northern Rwanda, killing 14 civilians and injuring 18. The attack comes after the killing of Sylvestre Mudacumura on 17 September, a prominent figure in the FDLR (ACLED Regional Overview, Africa, 25 September 2019). On 5 October, the Rwandan military announced that 19 militants of FDLR-RUD’s Urunana faction were killed in Kinigi following the deadly attack.

In Ethiopia, Prime Minister Abiy Ahmed was awarded the Nobel Prize, which immediately prompted protests from both supporters and critics.  Meanwhile, the oppositional Balderas Council’s Addis Ababa rally, planned on 13 October, was banned by the government in order to host an event celebrating the Prize. This led to a series of small protests and several arrests nationwide.

Moreover, on 6 October, for the first time since May 2019, an Oromo militia engaged government forces in combat in the Oromia Zone of Amhara region, reportedly leaving five civilians and three soldiers dead. The Oromia Zone is a particularly restive area within the Amhara region, with frequent bouts of intercommunal violence and border disputes with the Somali (ACLED, 13 October 2018).

Political tensions also escalated in the past weeks as Mozambique’s ruling party, the Liberation Front of Mozambique (FRELIMO) and the main opposition parties, the Mozambican National Resistance (RENAMO) and the Democratic Movement of Mozambique (MDM). As the parties prepared for the upcoming elections on 15 October 2019, the campaign season has been marked by violence with political leaders, party members, and civilians falling victim to FRELIMO and RENAMO attacks. Members of both parties targeted each other’s supporters on many occasions, and fatal incidents of arson, beatings and house raids are reported. Provincial governorships, once appointed by the President, are on the ballot in these elections, having the potential to weaken FRELIMO’s position.

Meanwhile, violence continued in northern Cabo Delgado province, where Islamist insurgent group Ahlu Sunna Wal Jamaa (ASWJ) has been active since 2017. The most significant attack of the past week took place on October 7, when a coalition of Mozambican forces and the privately contracted Russian paramilitary force “Wagner Group” attacked an ASWJ base in Cabo Delgado province (AllAfrica, 11 October 2019). At least 30 insurgents were killed. This comes after the 4 October delivery of Russian military equipment to Mozambique, and following an information-sharing agreement reached between the two countries in August (Bloomberg, 8 October 2019). 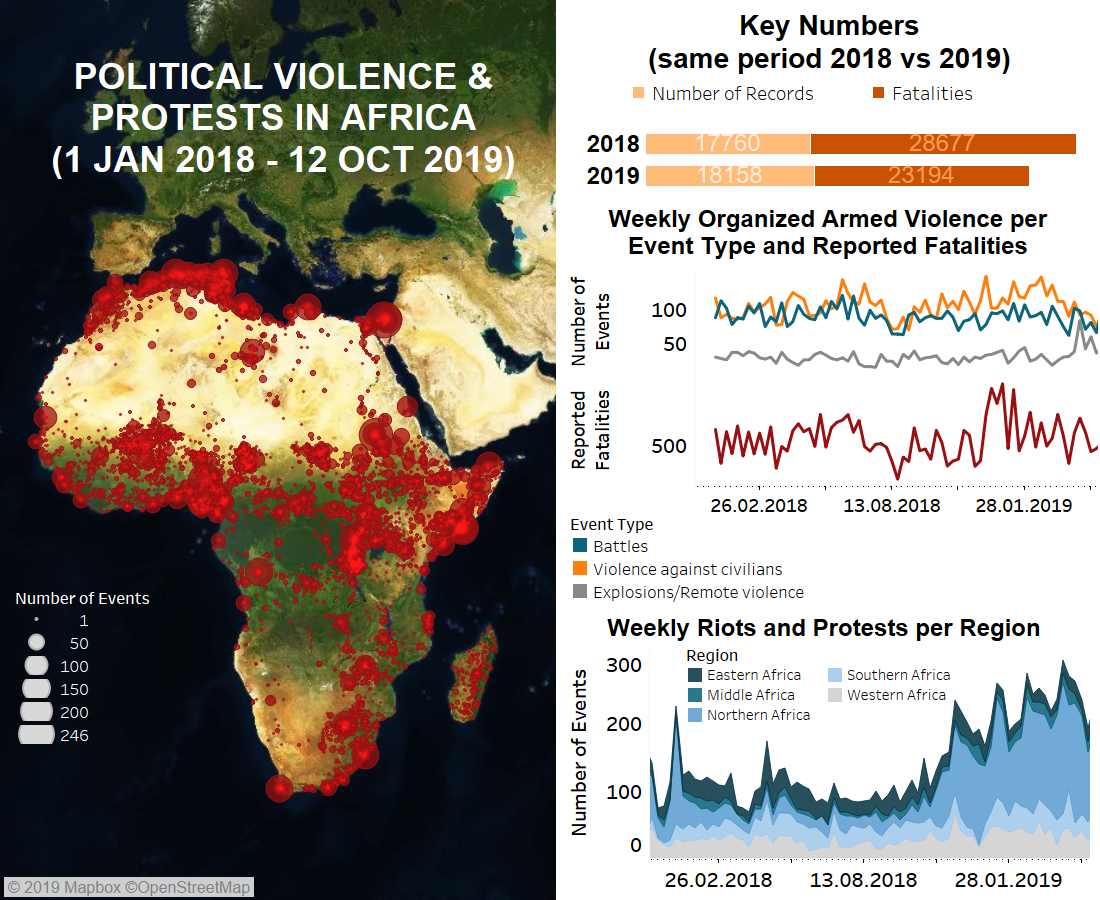