In South and Southeast Asia, key trends last week include: ongoing armed conflict in Afghanistan (including the year’s second deadliest attack in the country), Pakistan, India and Myanmar; the inauguration of President Widodo for a second term in Indonesia amid protest over changes to anti-corruption laws; and disorder in the Philippines from President Duterte’s continued “War on Drugs.”

Armed conflict continues in Afghanistan, Pakistan, India, and Myanmar. In Afghanistan, clashes between Taliban fighters and Afghan security forces alongside their allies continued last week with the highest number of violent events reported in Helmand, Ghazni, Wardak, and Nangarhar provinces. Furthermore, government forces reportedly recaptured 16 villages in Kelagai, Dahana i Ghuri, and Shahabuddin areas of Baghlan province during the first four days of a clearance Operation launched on 16 October (Ministry of Defense, 19 October 2019). Baghlan has been the scene of continued fighting between the Taliban and pro-government forces in recent years. The province is of significant strategic importance, as it is located on the only trans-Hindukush highway in Afghanistan – the major transit route between Kabul and the north. Both Dahana i Ghuri and Shahabuddin areas lie along this highway (Afghanistan Analysts Network, 15 August 2016).

Moreover, at least 70 civilians were reported killed and several dozen wounded by blasts inside a mosque during Friday prayers in the Jow Darah area of Dih Bala district, Nangarhar province. There was no immediate claim of responsibility. Afghanistan’s government has blamed the Taliban for the attack; however, a Taliban spokesman has denied involvement. Both the Taliban and the Islamic State (IS) are known to be active in Nangarhar province, yet the Deh Bala district borders rural IS-held areas. Some local residents suggest that the cooperation of villagers with the Afghan military in the fight against IS could be a possible motive behind the attacks (TOLO News, 19 October 2019). Friday’s violent incident, which was the second deadliest attack reported this year, highlights the struggle of Afghan security forces to prevent attacks by militants looking to overthrow the central government. The harm caused to civilians has surged in recent months, with the United Nations blaming anti-government forces for the recent spike (UNAMA, 17 October 2019). With none of the warring factions likely to attain a military victory in the near future, armed violence in Afghanistan will continue to take a high toll on the lives of Afghan civilians in the absence of a ceasefire.

In Pakistan, a local Peoples Party leader was reportedly shot dead in Bajaur district of Khyber Pakhtunkhwa province. Bajaur district has been the venue of several attacks on political leaders and pro-government tribal elders in recent months. The recent spate of violent attacks in the district, perpetrated by unidentified militant groups, have raised questions of a militant resurgence in the area (Gandhara, 5 September 2019).

Heightened levels of cross-border shelling and small arms fire between Indian and Pakistani forces continued along the Line of Control and Working Boundary. Last week, five fatalities were reported amidst 20 incidents of violence between border security forces of the two nations. These incidents suggest no letup in hostility between the two nations following the Indian government’s revocation of Article 370 and Pakistani Prime Minister Imran Khan’s speech on Kashmir at the United Nations General Assembly in September 2019 (Dawn, 27 September 2019).

In India, post-paid mobile services were restored in Jammu & Kashmir on Monday for the first time since the Indian government’s revocation of Article 370 (Economic Times, 14 October 2019). The resumption of internet service is the next step towards normalcy in the region, which has been under a security lockdown and communication blackout since 5 August 2019 (Gulf News, 14 October 2019).

In Myanmar, while fighting between the Arakan Army (AA) and the Myanmar military continued in Rakhine state, the military and Kachin Independence Organization/Kachin Independence Army (KIO/KIA) clashed in Mohnyin township in Kachin state. Clashes in Kachin state have been rare since the end of 2018. Meanwhile, in Shan state, fighting between the army and the Palaung State Liberation Front/Ta’ang National Liberation Army (PSLF/TNLA) and the Myanmar National Democratic Alliance Army (MNDAA) occurred. The AA, KIO/KIA, PSLF/TNLA and MNDAA are all part of the Northern Alliance, an alliance of ethnic armed organizations that have not signed the Nationwide Ceasefire Agreement (NCA). Further, clashes erupted in Kayin and Mon states last week between the Karen National Union/Karen National Liberation Army (KNU/KNLA) and the New Mon State Party/Mon National Liberation Army (NMSP/MNLA) over disputed territory near Three Pagodas Pass; later in the week both groups agreed to cease hostilities (Irrawaddy, 18 October 2019).

In Indonesia, there were several protests last week as Joko Widodo prepared for his second inauguration on 20 October (New York Times, 20 October 2019). After widespread demonstrations in September, many in the country are still upset over changes that weakened anti-corruption laws. Likewise, disorder in the Papua region has continued as the West Papua National Liberation Army (TPNPB) reportedly shot at a helicopter flown by a company working on telecommunication networks in the region last week. The separatist TPNPB often targets development-related efforts in the region as they view such efforts as facilitating the migration of non-Papuans into the region (World Politics Review, 17 October 2019).

In the Philippines, the “War on Drugs” continues. In Western Visayas, a controversial police officer — under whom two mayors on Duterte’s drug list were killed in police operations — was assigned to Bacolod City. He was told by Duterte in a speech that he was “free to kill everybody” (Rappler, 18 October 2019). In light of this, there were reportedly 19 drug-suspect fatalities stemming from police raids across the country last week.

Meanwhile, protests were held in support of Vice President Leni Robredo, who is seen as a leader of the opposition party and a critical voice in the executive branch. Rival protests were also held in support of her 2016 challenger, Ferdinand “Bongbong” Marcos Jr., the son of the former dictator. He has continually challenged the 2016 election results and is viewed as an ally of President Duterte. A decision on the challenge is pending before a Supreme Court filled with Duterte appointees who are under pressure to return a verdict favorable to the president (Asia Times, 18 October 2019). If Marcos’ challenge is successful, it would ensure Duterte’s control over the executive, legislative and judicial branches of the government. 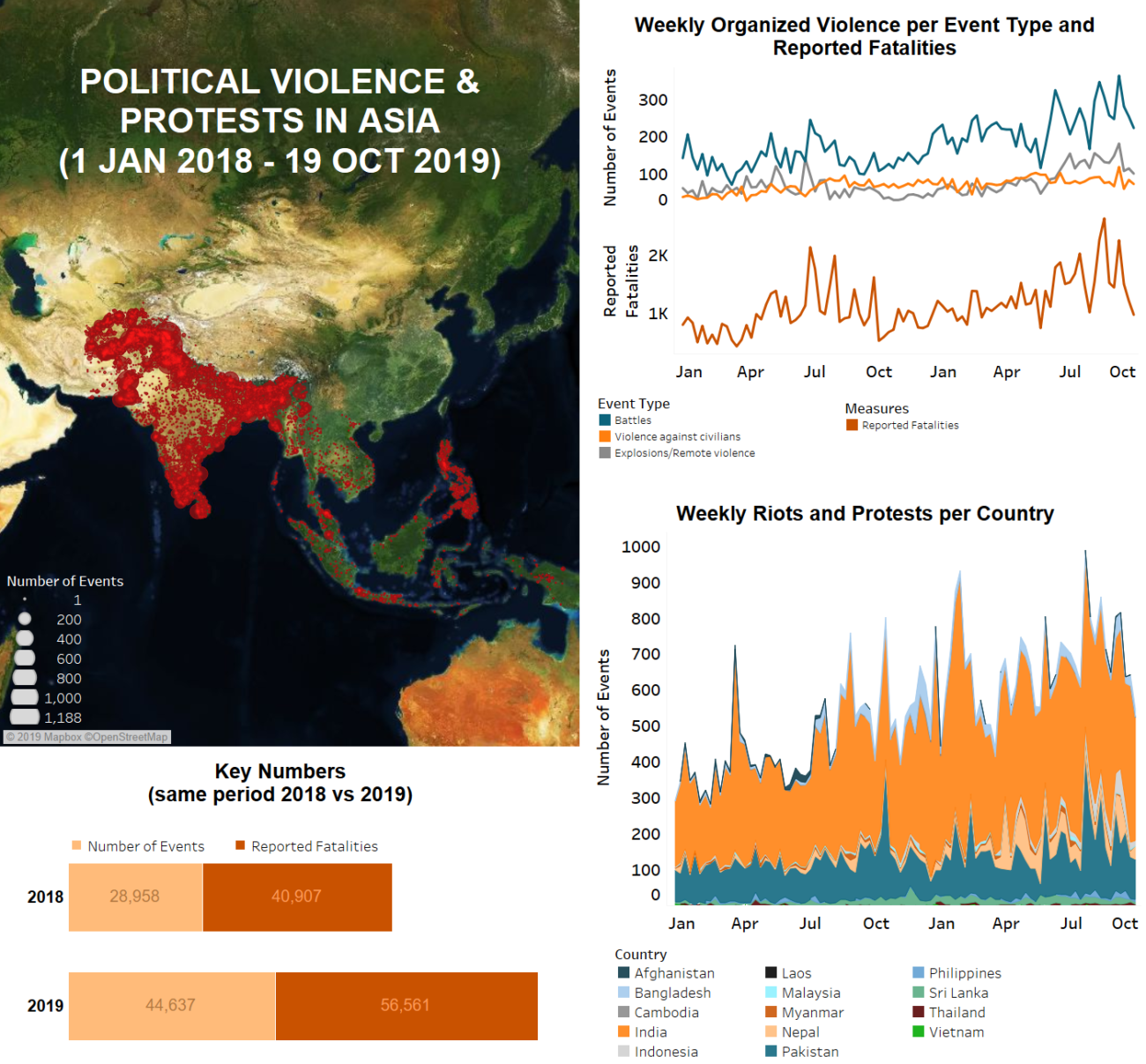