Key trends in South and Southeast Asia last week include: cross-border violence between state forces along Pakistan’s borders with Afghanistan and India; clashes between state forces and domestic rebels in Thailand and Myanmar; continued student-led protests against changes to anti-corruption laws in Indonesia; and the arrest of government opponents in the Philippines and Cambodia.

Cross-border violence took place between state forces along Pakistan’s borders with both Afghanistan as well as India. Between Pakistan and Afghanistan, forces engaged in cross-border shelling over two days last week. Three civilians were reportedly killed in Nari district in Afghanistan’s eastern province of Kunar, while several Pakistani soldiers and civilians were injured. Afghan officials claim that the fighting broke out when Afghan military forces alongside local militiamen tried to stop Pakistani forces from establishing a military installation along the disputed border (Al Jazeera, 28 October 2019). Relations between Afghanistan and Pakistan have long been fraught. Afghan officials accuse Pakistan of backing the Taliban, while Pakistani authorities claim that Afghanistan’s eastern provinces of Kunar, Nangrahar, and Nuristan have become safe havens for militants, from where they carry out attacks on Pakistani forces in border areas (Anadolu Agency, 28 October 2019). Pakistan is building a fence alongside its 2,400 km shared border with Afghanistan to improve security, but this has sparked clashes along the border in recent years as Afghanistan disputes the exact demarcation of the so-called ‘Durand Line’ (RFE/RL, 28 October 2019).

Cross-border violence between Indian and Pakistani forces continued last week as well. One Indian civilian was reportedly killed and several others were injured amidst incidents of shelling and gunfire along the Line of Control.

In India, the erstwhile state of Jammu and Kashmir (J&K) was officially bifurcated into the two union territories (UT) of J&K and Ladakh on 31 October (Hindustan Times, 30 October 2019). The bifurcation prompted several days of shutdowns and demonstrations in the Muslim-majority district of Kargil, which forms part of the new Ladakh UT. Prominent religious, political, and civil society figures in Kargil have voiced concerns that a governmental bias towards the Buddhist-majority Leh will lead to the marginalisation of Kargil within the new UT (Indian Express, 3 November 2019).

Clashes between state forces and domestic rebels were reported in Thailand and Myanmar. In Thailand, on the heels of the fifteenth anniversary of the Tak Bai incident, in which over 80 people died during and after a demonstration in Tak Bai in Thailand’s deep south (Al-Jazeera, 25 October 2019), reports of separatist violence increased last week, resulting in one reported civilian fatality in Narathiwat province.

In Myanmar, clashes between the military and the Arakan Army (AA) continued. The fighting has shown no signs of abating. Meanwhile, on 28 October, a ceremony for the fourth anniversary of the signing of the Nationwide Ceasefire Agreement (NCA) was held in which the government outlined a three-step proposal to move the moribund peace process forward (Frontier Myanmar, 29 October 2019). The AA and the majority of ethnic armed organizations (EAOs) currently in conflict with the military have not signed the NCA and view it as inadequately addressing their concerns for equality and self-determination.

Protests led by students continued across Indonesia as President Widodo announced he would not support repealing recent changes to anti-corruption laws which were seen as weakening the fight against corruption in the country (The Jakarta Post, 1 November 2019).

The arrest of government opponents in the Philippines and Cambodia was also a major development last week. In the Philippines, the mass arrest of over 50 people tied to “leftist” organizations such as Bayan Muna, GABRIELA, KARAPATAN, and Kilusang Mayo Uno has led to condemnation by groups who see this crackdown as an increase in the practice of “red-tagging” by the government (Amnesty International, 2 November 2019). Red-tagging is shorthand for when human rights groups and those critical of the government are accused of operating as fronts for communist rebels and subsequently targeted for judicial harassment or violence (for more on violence against civilians in the Philippines, including red-tagging, see this recent ACLED press release).

In Cambodia, exiled Cambodia National Rescue Party (CNRP) leader Sam Rainsy is preparing to return to the country on 9 November. His anticipated return has led to a crackdown on CNRP members who continue to be arrested. It remains to be seen how Sam Rainsy’s return will ultimately be handled by the government (The Diplomat, 31 October 2019). 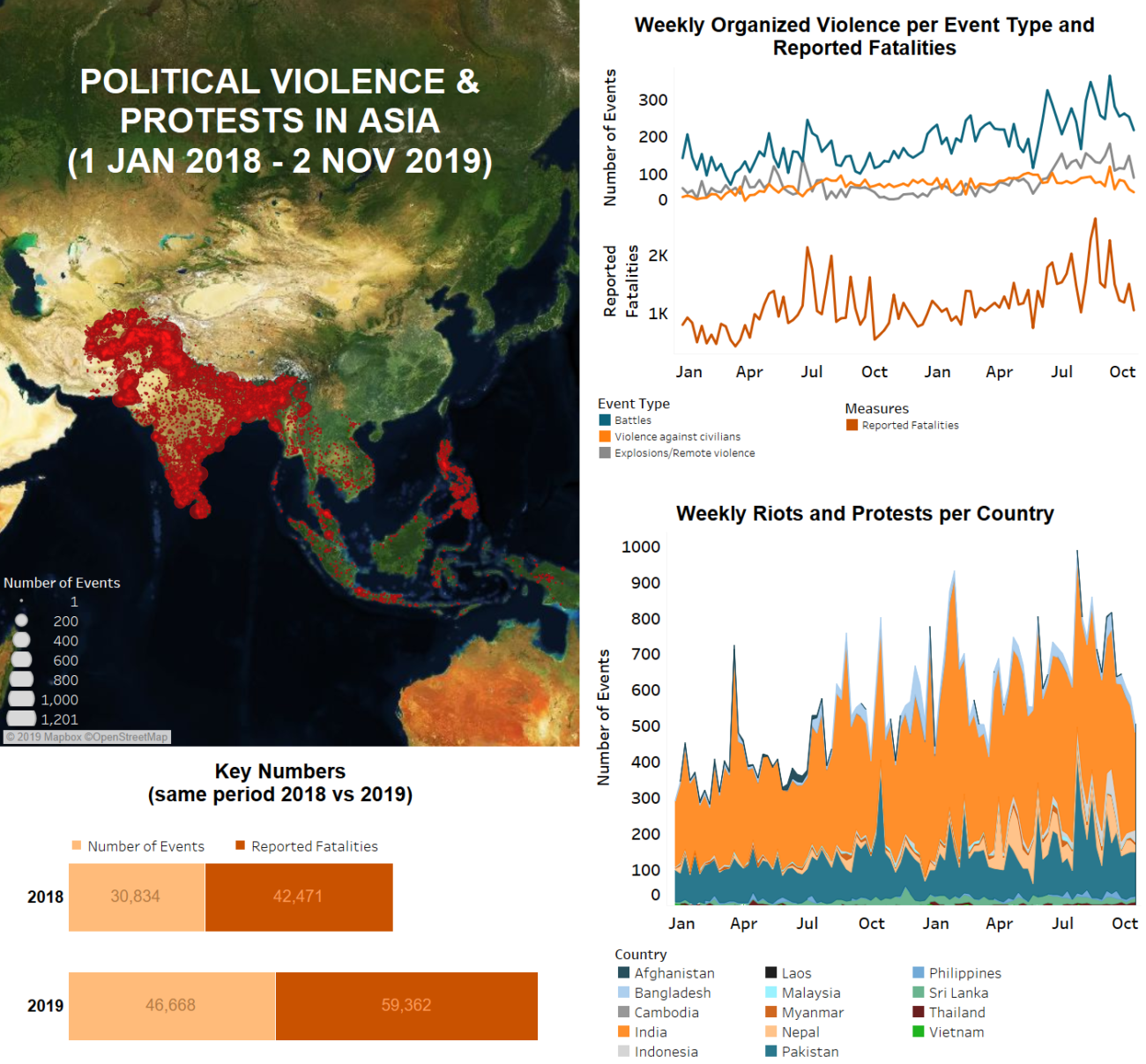