Last week in Central Asia and the Caucasus, key developments included protests over land ownership arrangements in Kyrgyzstan and political repression in Kazakhstan. In Afghanistan, peace talks were further stalled by a delayed prisoner exchange, while border clashes continued between Armenia and Azerbaijan.

In Afghanistan, a prisoner exchange between the government and the Taliban was postponed last week, but finally took place on 19 November. Three high-ranking Taliban figures, including Anas Haqqani – the brother of Taliban’s deputy chief and leader of the Haqqani Network – have been swapped for two captive American and Australian professors. The Taliban also released 10 Afghan soldiers. The prisoner swap is intended to restart peace talks between the Taliban and the United States. Furthermore, it is hoped that the exchange will act as a confidence-building measure, paving the way for unofficial direct talks between Afghan officials and the Taliban, to which the insurgent group has hitherto refused. An intra-Afghan dialogue between representatives of the Taliban and the Afghan government is expected to take place in China later this month (VOA, 15 November 2019).

In Kyrgyzstan, unrest over judicial failures and land dispute issues continued during the past week, leading to sporadic protests in different regions of the country. In the Bishkek and Kemin regions, protesters demanded justice for two unsolved murder cases, accusing the judiciary of corruption. Meanwhile, landowners protested against deficiencies in the land distribution process in the Bishkek and Chui regions. On 15 November, a group of people demonstrated in Bishkek to call attention to nearly 200 landowners languishing in legal limbo. Land disputes are a recurrent problem in Kyrgyzstan, prompting a series of governmental reforms since the early 1990s. However, a variety of tribunals have failed to adequately solve land conflicts among both individuals and state actors, amplifying general distrust in the justice system (The Diplomat, 20 October 2017; Land Links, February 2011).

In Kazakhstan, demonstrators continued to voice their opposition to the government’s on-going persecution of political activists. Following a statement from the police department claiming that a detained Kazakh civil rights activist had escaped from jail, several protest events broke out in the cities of Nur Sultan and Almaty. Protesters raised concerns about the mistreatment of imprisoned activists in the country and argued that the police department’s statement was suspicious. Although the activist resurfaced later, the protests point to the perceived unreliability of the country’s detention processes. Kazakhstan consistently faces criticism from human rights organizations over abuse, torture, and harassment in the country’s prisons, alongside the suppression of media, political opposition, and civil society (Human Rights Watch, World Report 2019).

Meanwhile, the Ministry of Defence (MoD) of Azerbaijan reported 28 armed clashes last week along the Armenia-Azerbaijan line of contact and 45 armed clashes along the Artsakh-Azerbaijan line, similar to previous weeks. Regarding conflict along this border, there was another document released by the United Nations Security Council (UNSC) last week. This includes conflict events occurring between the military forces of Armenia and Azerbaijan over the course of October 2019. These events are reported by this source on a monthly basis by the Ministry of Foreign Affairs (MFA) of Armenia to the UNSC. (See the ACLED Methodology and Coding Decisions Around Political Conflict and Demonstrations in Central Asia and the Caucasus for further information.) According to this document, the military forces of Azerbaijan targeted Armenian positions in the Tavush, Martuni, and Vayots Dzor provinces in the country’s border region over 170 times, in addition to firing into the Artsakh-Azerbaijan line over 40 times. This report adds over 200 armed conflict events to the data for the October 2019 period, which previously contained 362 events announced solely by MoD of Azerbaijan. Including information from the Armenian MFA on a monthly basis helps to supplement the weekly information from the Azerbaijani MoD to provide a fuller and more even picture of disorder along this border.

Note: The visualization below has been updated to reflect the integration of new data. 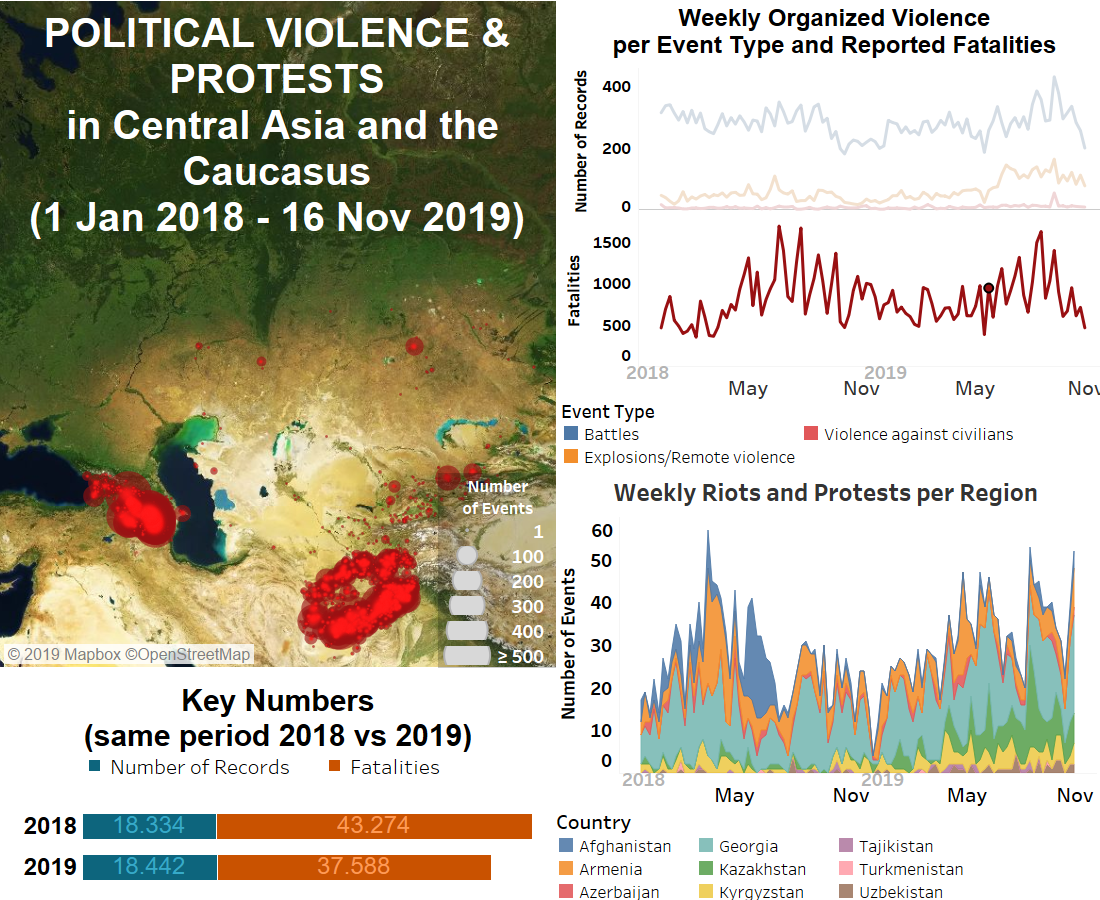