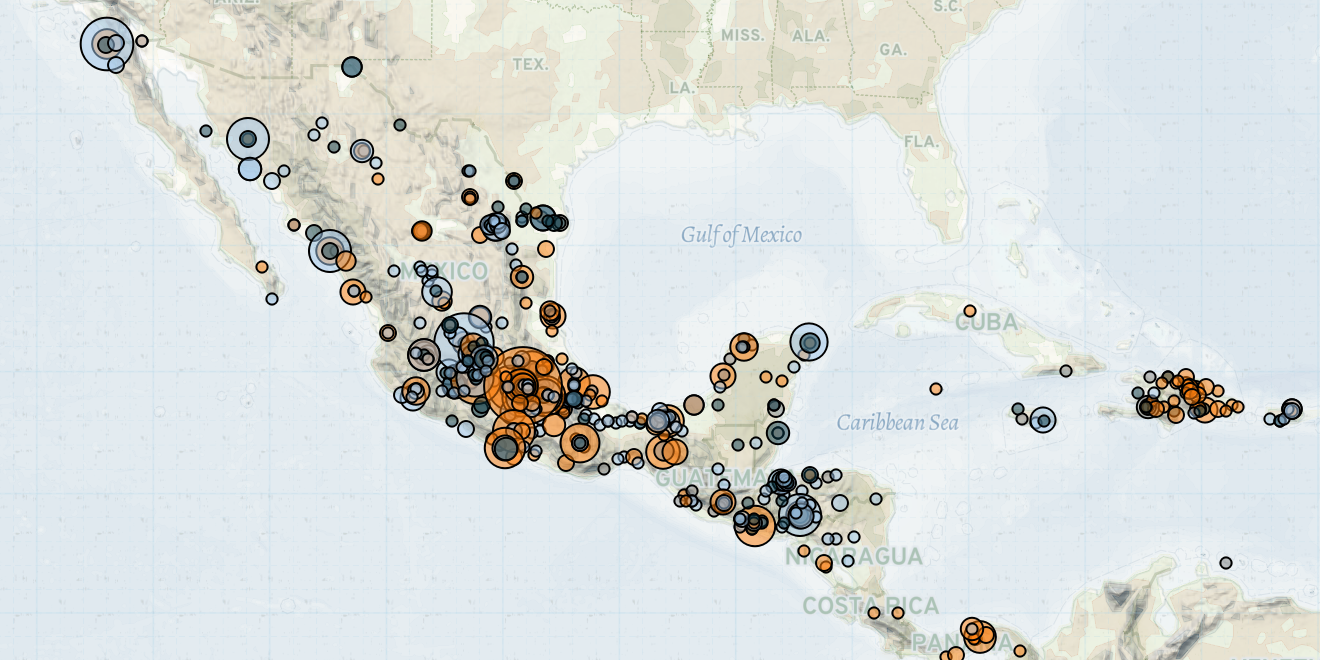 While gang violence continues in Central America and the Caribbean, this violence has decreased slightly since the beginning of the year. However, the number of demonstration events last week considerably increased in comparison to previous weeks, with large demonstration movements in Mexico and the Dominican Republic, as well as protests in Belize and Martinique.

Armed clashes between state forces and gangs continued in Mexico, with the number of reported fatalities stemming from these attacks increasing in recent weeks. In contrast, the number of reported fatalities resulting from battles among gangs decreased, after sharply increasing at the beginning of the month. However, the turf war in Michoacán between the Jalisco Nuevo Generación Cartel (CJNG), trying to defend its stronghold in the region (El Universal, 14 October 2020), and Los Viagras, a group that began operating as a self-defense force in 2014 (Insightcrime, 14 January 2015), is continuing. Several recent clashes in Michoacán left more dead on both sides. In addition, Michoacán authorities have discovered six clandestine graves with 34 bodies in the first 50 days of 2020 only (Zona Franca, 20 February 2020).

While during the early weeks of the new year protest activity was comparatively low, Mexico is experiencing high levels of demonstrations in the past two weeks. Several gruesome killings of women have triggered demonstrations across the country. Demonstrations were triggered by several recent killings of women, including the brutal femicide of a 25-year old woman and the rape and murder of a 7-year old girl. The public anger grew after President Obrador blamed neoliberalism for the growing violence against women. Women took to the streets in more than 11 cities demanding government action. With a high level of femicides, similar demonstrations around gender-based violence occurred during the past year in different regions of the country. Additionally, demonstrations around labor issues remained high last week, in particular members of the National Confederation of Metalworkers and Recyclers were protesting the new waste management law throughout the country.

Violence in the Northern Triangle continued in recent weeks. The exception is Guatemala, where attacks against civilians increased last week relative to December 2019 and January 2020.

In Belize, several armed clashes were reported in Belize City — an above average number of such cases in the country. Meanwhile, thousands of union members and citizens marched in Belize City against corruption (Amandala, 22 February 2020). The protest was initiated by the National Trade Union Congress of Belize (NTUCB) who had released a 6-point agenda to combat government corruption, calling for good governance (Amandala, 22 February 2020).

In the Dominican Republic, the sudden suspension of the municipal elections on 16 February has prompted widespread protests demanding the resignation of the Central Electoral Board (JCE). Four hours after voting began on election day, the electoral body canceled the elections due to a failure of the electronic voting system. Protests accelerated and reached thousands of participants in Santo Domingo towards the end of last week (El Pais, 24 February 2020). Protests occurred in more than 30 cities all over the country. The JCE has called for new extraordinary elections on March 15 using a manual system. During the elections weekend, there were several clashes reported where members of the Modern Revolutionary Party (PRM) and Dominican Liberation Party (PLD) fired shots at each other; one PLD activist was shot and killed on February 16.

In Martinique, thousands of people took part in a protest against pension and school reform. Protests against reforms proposed by the French government have been ongoing for the last few months.

Meanwhile, politically motivated attacks on opposition leaders continued in Nicaragua. A member of the political party Citizens for Freedom (CxL) was shot and killed by three armed men. Moreover, the son of a councilperson from the CxL lost his hand during an attack perpetrated by four unidentified men.

A group formed by eight opposition organizations brought forward a proposal for electoral reforms aiming to “restore transparency, electoral guarantees and promote effective citizen participation” (EFE, 21 February 2020). Nicaragua has scheduled elections for the end of 2021. However, in view of the on-going political crisis, national and international stakeholders have recommended to hold early elections, though this was declined by President Ortega (Reuters, 25 April 2020).

Lastly, in the North Caribbean Coast Autonomous Region, an autonomous region in Nicaragua, settlers invaded a Mískitu indigenous community and injured a woman by gunshot. This followed a deadly attack by about 80 settlers, which took place in January, claiming the lives of six Mayagna indigenous people. Although the law prohibits the invasion of indigenous lands, loggers, farmers, and miners continue to expand their industries into indigenous territories, which has been ongoing since 2015. Human rights groups claim that the settlers act in complicity with the political party of President Ortega (El Pais, 22 February 2020).