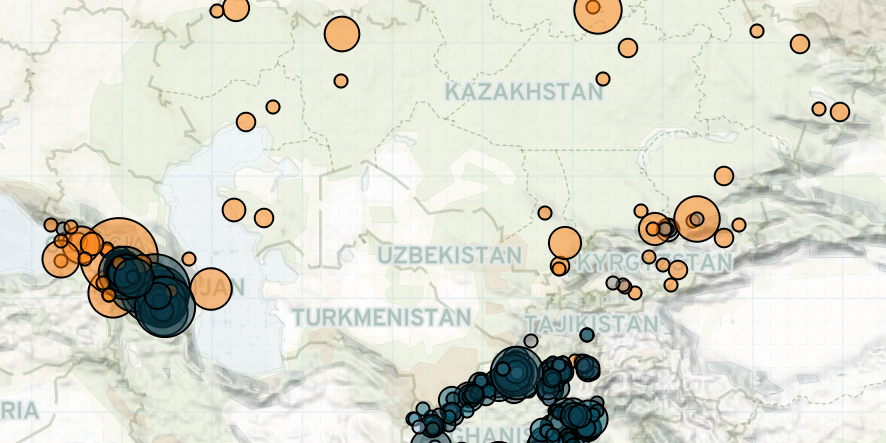 Last week in Central Asia and the Caucasus, the peace deal between the US and the Taliban led to a significant decrease in overall violence; the death of a prominent activist sparked protests in Kazakhstan; and Armenian and Azerbaijani forces engaged in a deadly cross-border exchange, despite lower levels of ceasefire violations.

In Afghanistan, there was a significant reduction in the number of violent events and reported fatalities amid a nationwide seven-day partial ceasefire. This period marks the least violent week in Afghanistan since ACLED began collecting data on the conflict in 2017. Subsequently, US officials and Taliban representatives signed a landmark peace agreement on 29 February in Qatar’s capital, Doha. Under the deal, American troops will withdraw from Afghanistan within 14 months in return for Taliban guarantees that it will prevent the country from being used to launch attacks against the US. The Taliban also agreed to engage in intra-Afghan peace talks, expected to begin on 10 March. The deal furthermore includes a pledge for the release of 5,000 Taliban prisoners in exchange for 1,000 Afghan government soldiers. However, Afghan President Ashraf Ghani announced a day later that his government had made no commitment in this regard, and that the prisoner exchange should be discussed during the intra-Afghan talks. The Taliban responded that it would not take part in talks until its prisoners were released and that it was resuming operations against Afghan government forces (Reuters, 2 March 2020). US officials had previously expressed hope that the week-long reduction of violence could be prolonged at least until the start of the intra-Afghan talks (Guardian, 2 March 2020), but the latest developments suggest that violence may increase in the coming days.

In Kazakhstan, the death of an activist in police detention sparked protests in Nur-Sultan, Almaty, Aktobe, Uralsk, Atyrau, and Karaganda cities throughout last week. On 24 February, Dulat Agadil, an activist known for participating in anti-government protests, was arrested at his residence and taken to Nur Sultan Detention facility where he died later that night. The autopsy reports state that he died from heart failure with no evidence of violence, adding that the four detainees staying with him testified that he was not subjected to abuse (Reuters, 25 February 2020). Unconvinced by the official reports, many anti-government protesters took to the streets, especially in the capital, where Kazakh security forces detained dozens (The Diplomat, 2 March 2020). The case was further complicated when a video showing Agadil’s bruised body was released, despite official forensic statements noting that these bruises are common in corpses (Al Jazeera, 1 March 2020). Agadil’s friends also rejected the government report that he had been intoxicated at the time of detention, stating that he did not drink due to his existing health issues. Finally, on 29 February, President Kassym-Jomart Tokayev broke his silence, saying that he examined the case and confirmed the conclusions of the authorities. Public distrust of the government’s narrative regarding Agadil’s death stems from broader political repression in Kazakhstan, where freedom of expression is highly restricted and dissent is often criminalized (International Partnership for Human Rights, 6 January 2020). Ongoing protests have criticized the legislation used by authorities as grounds to detain Agadil in the first place, in addition to suspicions over the cause of death. If it is revealed that the government is misleading the public about the case, it will likely trigger further protests in Kazakhstan (Eurasianet, 26 February 2020).

In the Caucasus, a deadly flare-up between Armenia and Azerbaijan led to multiple reported fatalities during the week. On February 24, an Azerbaijani border guard was reportedly killed by Armenian cross-border fire into Qazakh region. Azerbaijan’s State Border Service reported that their retaliatory fire then inflicted a fatality on the Armenian security forces. Armenian authorities deny Azerbaijan’s claims, however, and allege that Azerbaijani forces initiated the exchange a day earlier, on 23 February (JAM News, 24 February 2020).

Despite the lethal clash, ceasefire violations continued at slightly lower levels overall. Azerbaijan’s Ministry of Defense (MoD) reported 46 armed engagements on the Azerbaijan-Armenia Line of Contact and 41 armed engagements on the Artsakh-Azerbaijan Line of Contact. Additionally, the Artsakh Republic’s Defence Ministry documented that Azerbaijani forces fired 800 shots into Armenian positions and that they were responsible for more than 155 ceasefire violations on the Artsakh-Azerbaijan Line of Contact, marking a significant decrease from the previous week (Artsakh Republic Ministry of Defence, 29 February 2020).

Asena Karacalti is the South Asia Assistant Research Manager at ACLED, mainly overseeing the Afghanistan dataset.She holds a BA in Law, and an MSc in Cultural Anthropology and Development Studies from KU Leuven, Belgium. Her research interests focus on the transit experiences of migrant and refugee populations and political violence across the Middle East and North Africa. She has past experience as a lawyer and as an expert in migration and asylum organizations.She has previously worked as the Central Asia & the Caucasus, and Africa Research Manager at ACLED.
Dr. Ameneh Mehvar

Ameneh Mehvar is the Middle East Research Manager at ACLED, and an ESRC postdoctoral fellow at the University of Birmingham. She holds a PhD in International Relations and a master’s degree in Middle East and Central Asian Security from the University of St Andrews. Her research interests include political psychology, security studies, and the international politics of the Middle East. Ameneh is fluent in Persian, English and German, and has a working knowledge in Arabic.
5 March 2020
Share
TweetShare on Twitter Share on FacebookShare on Facebook Share on LinkedInShare on LinkedIn