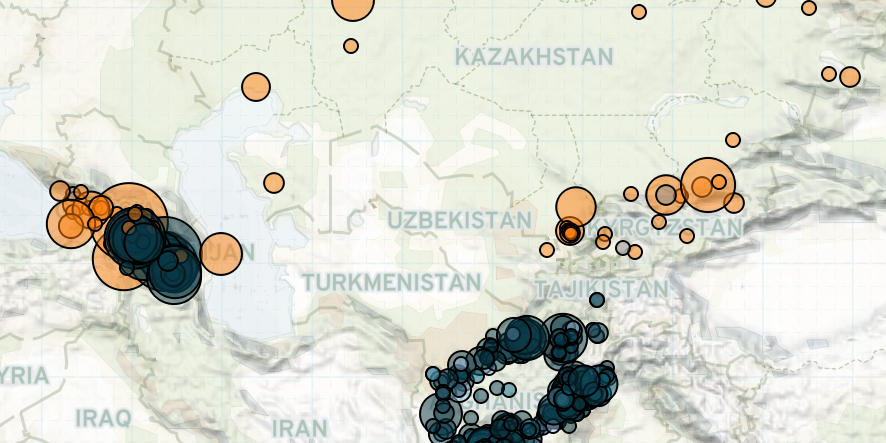 As of this week, most countries in the region introduced nationwide measures against the coronavirus outbreak (RFE/RL, 17 March 2020). In Kazakhstan, however, protests over the crisis began on 31 January, and have been continuing through the second week of March (ACLED, 6 February 2020). In the East Kazakhstan region, a construction project by a Chinese company created controversy in Zaysan town, with residents gathering on 19 and 20 February to demand that authorities deport the Chinese workers over accusations that they may be carrying coronavirus. On 11 March, in the west of the country, residents of the Akzhayik village in Terektinsky district protested against the planned quarantine facility for potential coronavirus patients. While some protesters threatened to burn down the facility, experts from the regional government later arrived at the scene to explain the necessity of such measures to prevent a possible outbreak (Uralsk Week, 11 March 2020). On 13 March, a group of protesters gathered in Almaty urging the authorities to take action against the spread of the virus.

In Georgia‘s breakaway province of Abkhazia, a quarantine space for coronavirus patients in the tourist city of Gonio also triggered demonstrations. On 5, 7, and 8 March, residents protested over claims that the facility was not adequately isolated to protect locals from indirect exposure to coronavirus. The protests ended after the regional Public Health Center assured the locals about their diligence on the issue (Imedinews, 5 March 2020; Publika, 8 March 2020).

Meanwhile, Kyrgyzstan’s government cited coronavirus measures as a reason to ban International Women’s Day gatherings in Bishkek on 8 March. However, the ban did not stop women’s organizations from holding a rally, which then came under attack by a group of masked men. Supporters of a nationalist-conservative group, Kyrk Choro, also appeared at the scene to hold a counter-protest (Kaktus Media, 8 March 2020). Although Bishkek police claimed that the assailants were brought to justice, the police dispersed the protest by detaining 70 female activists. This intervention sparked widespread condemnation from women’s groups and activists, who then held another rally in Bishkek on 10 March (RFE/RL, 8 March 2020; 11 March 2020). Women-led protests also took place in Kazakhstan, Armenia, Azerbaijan, and Georgia. However, police dispersed the rally organized in Azerbaijan‘s capital Baku on 8 March, abandoning detained protesters outside of the city as part of the authorities’ unconventional deterrence policy (Open Caucasus Media, 10 March 2020).

Lastly, in Afghanistan, violence continued at a similar level to the week prior, with Taliban militants targeting Afghan security forces in at least 26 provinces across the country. The group, however, refrained from attacking US or NATO forces in accordance with the US-Taliban peace agreement. In return, the United States has begun withdrawing its troops from Afghanistan, planning to reduce the number of forces from about 12,000 to 8,600 by August 2020 as part of the peace deal (BBC, 9 March 2020). However, continued disagreements over a prisoner swap has stalled the intra-Afghan peace talks, initially planned to start on 10 March. The Taliban has rejected Afghan President Ghani’s offer to release 1,500 Taliban prisoners, insisting that negotiations cannot begin until all 5,000 prisoners cited in the US-Taliban agreement have been released (Foreign Affairs, 16 March 2020).

Deepening political disarray in Kabul is further complicating the situation. On 9 March, two parallel presidential inaugurations were held by Ashraf Ghani and Abdullah Abdullah, with both men claiming to have won last year’s vote. Two days later, Ghani issued a decree, dissolving Abdullah’s chief executive post. Abdullah, however, rejected the move, arguing that Ghani was no longer president and his decree was invalid (Al Jazeera, 12 March 2020). The US mission, led by special envoy Zalmay Khalilzad, is reportedly in talks with the two rivals in an effort to strike a political compromise (Tolonews, 12 March 2020).