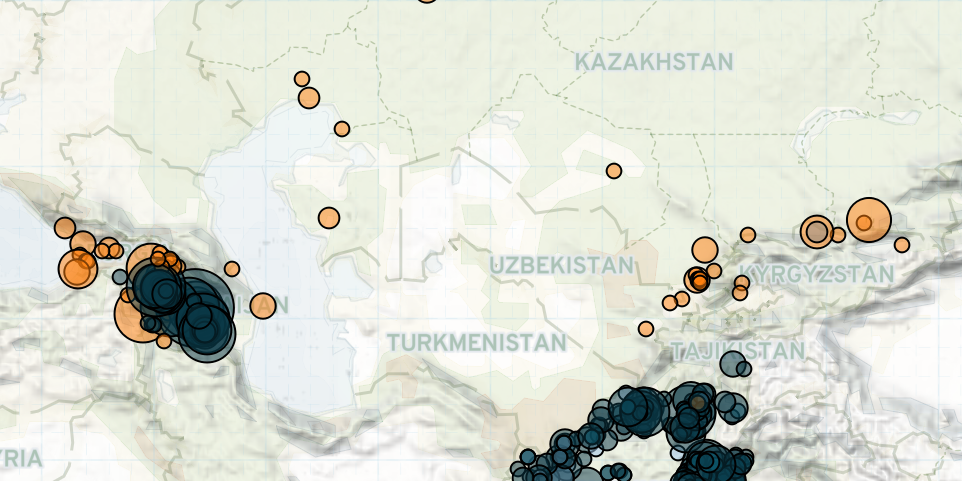 In Central Asia, the continued spread of the coronavirus impacted the security situation in Afghanistan and Kazakhstan last week, while the Taliban intensified attacks on Afghan forces. In the Caucasus, the de facto states of Abkhazia and Artsakh proceeded with scheduled elections despite the pandemic, and cross-border clashes between Azerbaijan and Armenia resulted in further casualties.

The overall number of political violence events declined in Afghanistan last week, coinciding with progress in talks between Taliban and Afghan government officials over an exchange of prisoners. The two sides have reportedly agreed to start a phased release of thousands of prisoners later this week (Reuters, 16 March 2020, Newsweek, 25 March 2020). However, fighting intensified in northern Afghanistan. On 28 March, Taliban militants took control of the district of Yamgan after three hours of heavy clashes with Afghan forces. The district first came under Taliban control in 2015, and the insurgent group has now successfully regained control only six months after its recapture by the Afghan government in September 2019. Taliban forces additionally took control of four villages in the neighboring Jurm district. According to provincial officials, the neighboring district of Keran wa Menjan may also be at the risk of falling to the Taliban (Xinhua, 29 March 2020).

The persistent fighting comes despite national and international appeals for a ceasefire to slow the spread of the coronavirus. Taliban officials have promised safe passage for health workers in Taliban-controlled areas to address the outbreak (Al Jazeera, 18 March 2020). However, experts warn that tackling the epidemic will require all of the country’s resources be diverted to the health sector rather than the war (New York Times, 25 March 2020). Afghanistan’s capital, Kabul, as well the provinces of Herat, Farah, and Nimruz, which share a porous border with Iran – an epicenter of the coronavirus – have gone under partial lockdown (VOA, 26 March 2020). Afghanistan’s Ministry of Health has warned that 25 million people in the country could become infected, with the virus already having reached at least 12 provinces (Al Jazeera, 25 March 2020).

The crisis has especially impacted Kazakhstan, with the national currency plunging against the USD amid falling global oil prices, leading the government to announce a new economic plan last week (New Europe, 26 March 2020). Controversially, former president Nursultan Nazarbayev, using the title of ‘Leader of the Nation’, also made a nationwide call for donations to a special fund in “this difficult period” (RFE/RL, 20 March 2020, 26 March 2020). However, many of these efforts to address the economic fallout of the outbreak have faced consistent criticism. Women’s groups have led protests in Nur-Sultan, Almaty, and Shimkent cities over the last two weeks after the government re-introduced state subsidies, for example, which the demonstrators claimed were insufficient. Protesters also demanded to meet with officials to address claims that the subsidies were not paid as promised. Lack of effective financial assistance for working women was already a significant issue in Kazakhstan (ACLED, 22 January 2020) and economic stagnation is likely to only aggravate the situation. On 26 March, another protest took place in Kyzylorda city as the local authorities launched a food distribution plan only for large families with children. The next day, a stampede took place during the distribution of food bags, leading to further frustration with the process (RFE/RL, 27 March 2020).

In the Caucasus, Georgia, Armenia, and Azerbaijan introduced nationwide measures to curb the spread of coronavirus (JAM News, 25 March 2020). At the same time, the region’s de facto states went ahead with scheduled elections despite the risks posed by the pandemic. On 22 March, presidential elections were held in Abkhazia, a breakaway region of Georgia, months after the resignation of the previous leader following riots in January (ACLED, 16 January 2020). While the opposition candidate declared victory, the elections were criticized for the limited participation of international observers due to coronavirus measures (Eurasianet, 23 March 2020). The de facto government of Artsakh also held elections on 31 March, drawing critical reactions from Azerbaijan over the region’s disputed status (Asbarez, 31 March 2020) as well as from local opposition groups over coronavirus risks. Since 23 March, the opposition has held rallies calling for the resignation of Artsakh’s current leader (Caucasian Knot, 26 March 2020). Results of the election are to be announced this week.

In another development, cross-border violence between Armenia and Azerbaijan continued, with multiple reported casualties. On 24 March, Azerbaijan’s military shelled Artsakh forces in the Goranboy region, claiming the attack killed a soldier, though this was later denied by Artsakh’s Defence Ministry. On 27 March, an Armenian soldier was injured in an attack on Armenian positions in the Tavush region. So far in 2020, seven soldiers have been reportedly killed in the conflict and at least as many have been injured, marking an increase from the same period in 2019. On the other hand, the number of ceasefire violations last week was slightly lower than in the week prior. Azerbaijan’s Ministry of Defence reported 45 armed engagements along the Artsakh-Azerbaijan Line of Contact and 17 armed engagements along the Armenia-Azerbaijan Line of Contact. Additionally, Artsakh’s Defence Ministry reported that Azerbaijani forces fired 1,200 shots into Armenian positions and were responsible for more than 150 ceasefire violations on the Artsakh-Azerbaijan Line of Contact (Artsakh Republic Ministry of Defence, 28 March 2020).