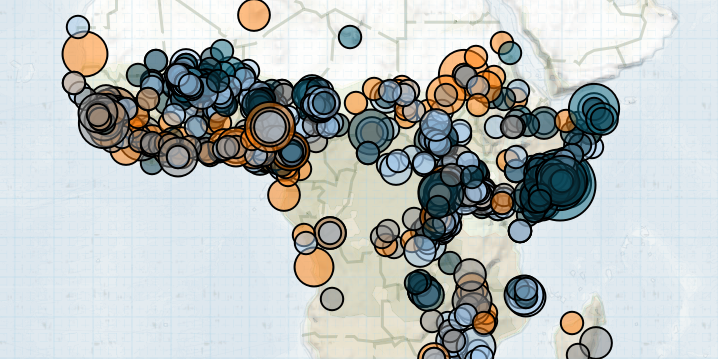 In Africa last week, government responses to the growing spread of the coronavirus prompted violent demonstrations as well as the continued use of violence by state forces. In Libya, fighting continued despite calls for a ceasefire on the first anniversary of the Tripoli offensive. Meanwhile, Islamist militant groups continued operations in the Sahel and Somalia, amid concerns that such groups will exploit the coronavirus to further their aims (AP, 2 April 2020).

The economic impacts of coronavirus restrictions are increasingly reflected in disorder across Africa. In a number of countries, labor groups actively contested those restrictions, particularly measures involving personal transportation and trade. Riots broke out in Kenya, Uganda, and Zimbabwe, where authorities have enforced restrictions with violence.

In Kenya, several fatalities were reported after security personnel employed lethal force against civilians during the enforcement of a national curfew. In one case, a boy was killed by live ammunition on the outskirts of Nairobi. Fatal attacks on civilians were also reported in Burundi, Chad, Ethiopia, Nigeria, and South Africa. Although the majority involved state forces, non-state militias also took an active role in enforcing coronavirus restrictions. In Burundi’s Kirundo province, Imbonerakure cadres killed a father and son for allegedly violating the coronavirus quarantine after returning from Tanzania.

In Uganda, journalists covering coronavirus restrictions faced multiple attacks by police. In Wakiso, police and local residents also carried out a raid on a homeless shelter servicing the LGBT community, beating and arresting shelter residents. Although ostensibly related to the enforcement of coronavirus measures, these attacks highlight the opportunity for these restrictions to be abused.

In the face of continued fighting in Libya, the United Nations Support Mission in Libya (UNSMIL) issued a plea for the cessation of hostilities on the first anniversary of the Tripoli offensive by Khalifa Haftar’s Libyan National Army (LNA) (UNSMIL, 4 April 2020). Despite the plea, LNA forces carried out a sustained bombardment of Government of National Accord (GNA) targets in Tripoli. The GNA countered with airstrikes in Sirte province, claiming significant LNA fatalities.

In Somalia’s Puntland, Al Shabaab assassinated the governor of the Nugal region in a targeted suicide bombing in the administrative capital of Garowe. Militants also executed six men in public on the allegation of spying for foreign countries in Jubaland’s Bu’aale town. Al Shabaab is ignoring UN calls for a global ceasefire in response to the coronavirus pandemic (Garowe Online, 28 March 2020), instead remaining operationally active across the country. Somalia was also hit by inter-clan violence, most notably in Jubaland and Lower Shabelle’s Wanlaweyn. In Jubaland, heavy inter-clan violence was reported in the Kismayo area, as rival Majeerteen and Awramale clan militias clashed across several days over disputed territory.

Islamist militants suffered significant losses in the Sahel, though they maintained substantial operations across the region. In Niger, presumed Islamic State in the Greater Sahara (ISGS) militants staged a large scale attack on a Nigerien army position in the Tillaberi region. Military forces suffered only minor losses, but dozens of militants were reportedly killed. Similarly, an attack by presumed Jama’at Nusrat al-Islam wal-Muslimin (JNIM) militants on a Burkinabe army base in Burkina Faso’s Boucle du Mouhoun region resulted in significant militant fatalities.

Finally, Boko Haram maintained active operations in the border region between Gwoza in Nigeria’s Borno state and Mayo-Sava and Mayo-Tsanaga in the Far-North of Cameroon. Militants staged a number of raids on Cameroonian villages, also clashing with Nigerian military forces, Civilian Joint Task Force fighters, and local hunters in the Pulka area of Gwoza. Nigerian state forces launched airstrikes on Boko Haram targets in Gwoza, the Sambisa forest, and the Lake Chad region. Nigerian airstrikes came amid the launch of Operation Boma’s Wrath by Chadian forces in the Lake Chad region. As part of the coordinated effort, the Chadian government announced the deployment of five companies to Niger and Nigeria (The Telegraph, 2 April 2020). Operation Boma’s Wrath was launched in response to the previous week’s attack by Boko Haram militants, which left almost a hundred Chadian soldiers dead.