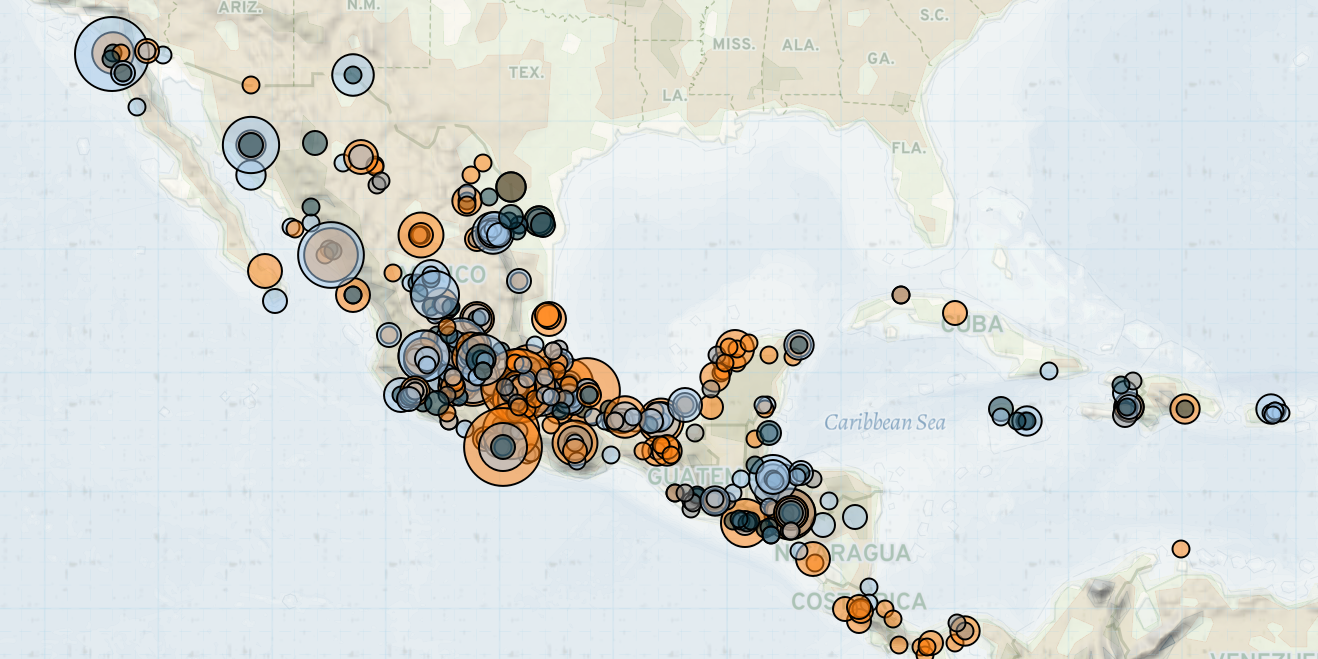 While violence targeting civilians remained below recent trends in Central America and the Caribbean last week, battles between state forces and gangs continued. Across the region, the coronavirus outbreak fueled protests over healthcare and economic concerns.

In Mexico, gang violence continued even as the coronavirus spread across the country. A shoot-out between two criminal groups, La Línea and Gente Nueva, over a disputed area in the northern zone of Chihuahua state left 19 gang members dead. The turf war between La Línea and its rival cartels also led to the notorious attack on an American Mormon family in November 2019 (El Universal, 6 March 2020). In Veracruz, a journalist was shot dead in a drive-by incident. Her death spurred multiple demonstrations by members of the media demanding justice and greater security. Recurrent attacks against journalists make Mexico one of the world’s most dangerous places to work for the press.

Elsewhere, despite the government’s declaration of a health emergency and the suspension of non-essential activities, demonstrations over the coronavirus response continued. For the third week, health workers protested in 12 Mexican states against the lack of supplies and proper protocols to treat coronavirus patients. Service sector workers continued to protest as well, calling for financial support to deal with the pandemic. While most events were peaceful, in Michoacán state, police intervened in a demonstration started by avocado sellers who were evicted from their markets after the suspension of non-essential activities, leading to violence. Three demonstrators and a journalist were reportedly injured by police gunfire. Riots inside migrant shelters were also reported in Sonora, Tabasco, and Coahuila states over overcrowding and poor sanitation conditions.

In Honduras, demonstrations continued in the country’s main cities calling for food and water in light of the health emergency. Demonstrators in Tegucigalpa and San Pedro Sula used burning tires and other obstacles to block the streets.

Similar protests took place in Costa Rica, El Salvador, and Panama demanding measures to counteract the economic fallout from the coronavirus quarantine. In El Salvador, hundreds of people gathered in different parts of the country in hopes of receiving an economic subsidy promised by the government with vague eligibility criteria. At news of the high turnout, President Nayib Bukele ordered the distribution centers to shut down, prompting at least two demonstrations in the San Salvador department that were dispersed by the police.

In Costa Rica, for the second consecutive week, locals constructed roadblocks to prevent the spread of the coronavirus infection in Puntarenas. Members of the Ngobe indigenous group were among those instituting such measures, as the community decided to close all access points to their territory in an attempt to curb the outbreak.

Health workers in Panama protested over the lack of adequate protection against the coronavirus in the country’s hospitals.

In Trinidad and Tobago, local residents demonstrated against the decision to transport recovering COVID-19 patients to a former elderly home in Sangre Grande, burning tires along the road.

In Nicaragua, a political opponent of the Ortega regime was found dead in Wiwili de Jinotega in the Jinotega department. The deceased was a former member of the Nicaraguan Resistance – also known as the Contras – the armed opposition to the Sandinista government in the 1980s. His body showed signs of torture and was found at the local headquarters of the FSLN, the ruling Sandinista National Liberation Front party. This is the third death of an opposition member in the small town Wiwili de Jinotega after the violent crackdown against nationwide anti-government protests in April 2018 (La Prensa, 26 March 2020).

Franziska Pfadt is the Learning Coordinator at ACLED. She holds a LL.M. in International Law from Leiden University and a B.A. in Political Science and Law. Her research interests include children in conflict, human rights in armed conflicts, and the protection of civilians in modern warfare.