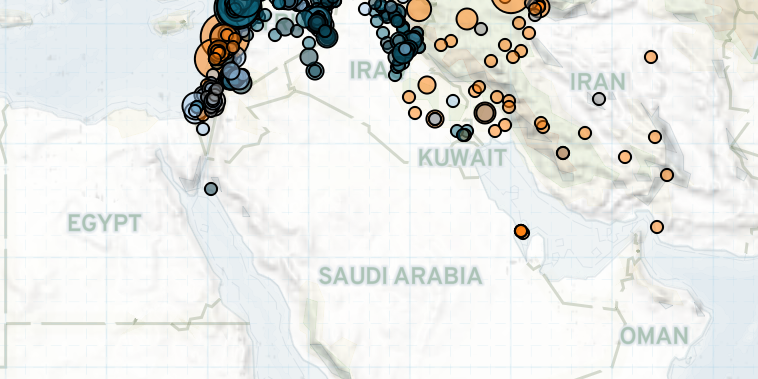 Last week in the Middle East key developments include: continued Islamic State (IS) attacks in Yemen, Iraq, and Syria; a significant decline in remote violence in Syria; increased protests in Lebanon and Iran; and escalating tensions between the US and Iran in the Persian Gulf.

Although Saudi Arabia announced a two-week unilateral ceasefire in Yemen on 9 April, fighting on the ground has continued unabated, and the Saudi-led coalition soon resumed airstrikes throughout Houthi-controlled areas (The Independent, 18 April 2020). Clashes last week were especially intense in northwestern Ad Dali governorate and western Marib governorate as Houthi forces reportedly initiated large-scale offensives and sent reinforcements to both fronts. Additionally, the 17 April death of a pro-Hadi liaison officer to the Stockholm Agreement (who was injured in an 11 March attack leading to the partial withdrawal of pro-Hadi forces from the agreement) resulted in renewed calls for the pro-Hadi government to remove itself from the agreement entirely (Middle East Monitor, 20 April 2020).

Despite reaching an agreement on 14 April over troop deployments in the south (Middle East Monitor, 16 April 2020), forces loyal to the Southern Transitional Council (STC) and the Hadi government clashed throughout Abyan, Aden, Lahij, and Shabwah as well as in Socotra. Additionally, redeployments of troops by pro-Hadi and pro-STC forces indicate that the agreement is unlikely to be implemented. Pro-STC forces moved troops off the frontlines in Hodeidah and Lahij governorates and into Abyan and Aden, while pro-Hadi forces did the same with fighters in Marib and Shabwah governorates. Loyalties remain fickle in Socotra: the whole coast guard defected from the Hadi government to the STC and took over territory, including the airport from pro-Hadi forces (Middle East Monitor, 15 April 2020). By Saturday, pro-Hadi forces reportedly regained the airport with Saudi assistance.

IS in Yemen claimed one sniping attack against Houthi forces in Al Bayda governorate, returning to its normal area of operations after an unusual operation took place outside their area of activity in Ad Dali governorate the week prior.

In Iraq, IS activity continued to increase. The group intensified attacks in Diyala province, with at least four in just two days; launched at least two other attacks in Kirkuk province; and additionally mounted a rare attack on the Sinjar Resistance Units (YBS) in Ninewa province. IS seems to be reorganizing its ranks in territories that are disputed by the Kurdistan Regional Government (KRG) and the federal government in Baghdad (Kurdistan24, 18 April 2020). These disputes along with measures being taken to contain the coronavirus outbreak, are compounding the challenges faced by the Iraqi government in curbing IS activity in the country.

At the same time, Iraq faces another challenge: the installment of a new government by the third Prime Minister-designate, Mustafa Al Kazimi. While Al Kazimi’s nomination seems to inspire more hope for stability due to his backing by several influential blocs in parliament, the country’s protest movement does not seem likely to accept him. Last week the demonstrators vowed once again to return to the streets after the immediate danger of the coronavirus subsides (Yaqein, 16 April 2020). Some protests were reported in both Iraqi Kurdistan and in southern Iraq denouncing the effects of the curfew, while others called for pay increases. (For more on the latest trends around demonstrations in Iraq, see this recent ACLED analysis piece)

Meanwhile, Turkish operations in northern Iraq against the Kurdistan Workers’ Party (PKK) have intensified in recent weeks. Last week, however, a Turkish drone strike hit a refugee camp for Turkish Kurds in Makhmour, reportedly targeting PKK members but instead killing three refugee women (Rudaw, 15 April 2020). This attack further complicates the issue of Turkish operations and their violation of Iraqi sovereignty, raising tension between both countries.

In Syria, sporadic clashes continued along the Idleb frontlines between regime and allied militia forces, on one side, and the opposition and Islamist factions on the other. Meanwhile, Turkey doubled down on its presence in the Greater Idleb area by reinforcing existing positions. Elsewhere, assassinations by IS and unidentified gunmen targeting Syrian regime elements in Dar’a and Deir-ez-Zor highlight continued instability in its areas of control as well as the capabilities of militant groups to conduct major attacks beyond the frontlines.

In Lebanon, the highest number of demonstrations occurred last week since the beginning of the coronavirus lockdown. Protesters gathered in defiance of the stay-at-home order and called attention to the country’s worsening economic, living, and health conditions. There were also clashes reported between Lebanese residents and Syrian refugees that resulted in a decision by the government to dissolve a Syrian refugee camp in Ghazze (Euro-Med Monitor, 18 April 2020). While the clashes themselves were not related to the coronavirus pandemic, closing a refugee camp during the pandemic poses significant added risks to the refugees of the camp.

In Iran, dozens of protests were held by farmers and labor groups over a range of issues, including unpaid salaries and benefits as well as farming water supplies. At least eight labor protests were related to problems for workers and businesses caused by the spread of the coronavirus.

Additionally, 11 vessels belonging to the Islamic Revolutionary Guard Corps (IRGC) navy circled and came close to US Navy and Coast Guard ships in the Persian Gulf last Wednesday. US officials called the moves “dangerous and provocative,” while the IRGC said in a statement that it was responding to two provocations by the US Navy on 6 and 7 April (Tasnim News Agency, 19 April 2020). As of 22 April, President Trump instructed US Naval forces to “shoot down and destroy” Iranian boats if they harass US warships (Independent, 22 April 2020).