Regional Overview: Central Asia and the Caucasus
26 April – 2 May 2020 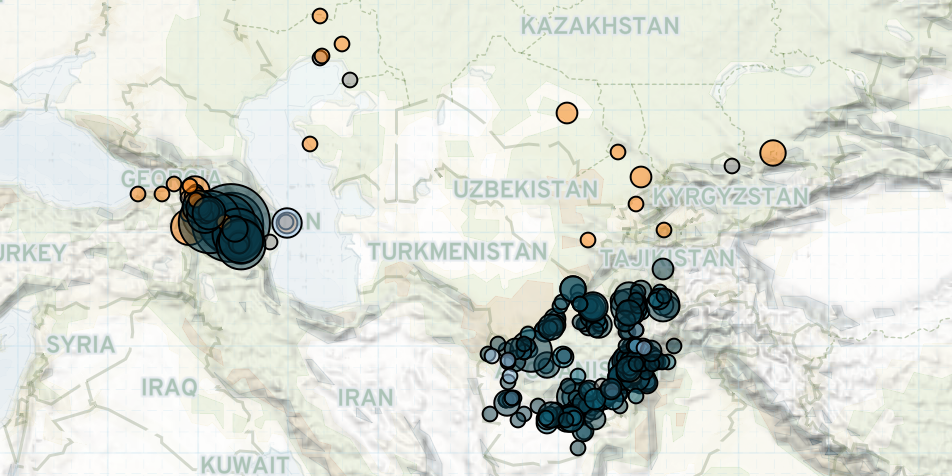 Last week in Central Asia and the Caucasus, intensified Taliban attacks on Afghan forces prompted a warning from the US, while protests took place in Kazakhstan and Georgia over the coronavirus pandemic’s impact on local economies. Meanwhile, ceasefire violations continued between Azerbaijan and Armenia.

In Afghanistan, the Taliban launched dozens of daily attacks on Afghan forces. The spokesman for Afghanistan’s Office of the National Security Council said in a press conference that Taliban forces have conducted an average of 55 attacks per day since the signing of the peace deal with the US on 29 February 2020 (TOLO News, 25 April 2020). ACLED records a lower number of attacks during this period, though trends do confirm that Taliban forces have initiated the majority of attacks since the signing of the peace deal. US military officials warned the insurgent group that further attacks would provoke a response. Acknowledging that the Taliban has kept its pledge not to attack metropolitan areas and US-led coalition forces, an American military spokesperson revealed in an open letter that there was a “spoken commitment” under the US-Taliban peace agreement for all sides to reduce violence by 80%. Adding that the US “has not conducted a single offensive strike or operation” in recent months, the letter stressed that coalition forces would support Afghan troops should Taliban attacks continue at their current rate (USFOR-A, 2 May 2020). The warning comes despite reports suggesting that US President Donald Trump is pushing for a quicker withdrawal from Afghanistan due to concerns over the coronavirus pandemic, as well as his impatience with the slow progress of peace talks (NBC, 27 April 2020). The US is currently ahead of its withdrawal schedule, with fewer than 10,000 troops in Afghanistan. According to a US defense official, the coronavirus pandemic has likely accelerated the process (CNN, 30 April 2020). With intra-Afghan peace efforts stalled, there are concerns that government forces will be left to fight an emboldened Taliban with less US support (RFE/RL, 5 May 2020).

Across the remainder of the region, ACLED records a slight increase in demonstrations as some states began to ease coronavirus-related restrictions (RFE/RL, 30 April 2020; JAM News, 24 April 2020).

In Kazakhstan, shop owners demonstrated at a market in Almaty city to call for management to suspend rent payments and reopen businesses. Similarly, cab drivers in Ust-Kamenogorsk city protested against administrative barriers that make it difficult for private taxis to operate. Quarantined Kazakh medics from the Central Clinical Hospital of Almaty city demonstrated against the perception that they were spreading the coronavirus due to misinformation circulated by the media. Additionally, quarantined patients protested at the regional infectious diseases hospital in Uralsk city to demand release, as they had not been discharged after the mandatory 14-day period.

In Georgia, people demonstrated against the government’s response to the crisis and subsequent economic hardship. With markets closed due to coronavirus, traders organized protests last week in Rustavi and Tbilisi to call for reopening as well as government rent subsidies. A group of transgender women also organized a protest in Tbilisi on 1 May over the financial strain caused by the lockdown. One of the protesters attempted to self-immolate but, after police intervention, she was taken to hospital where she recovered.