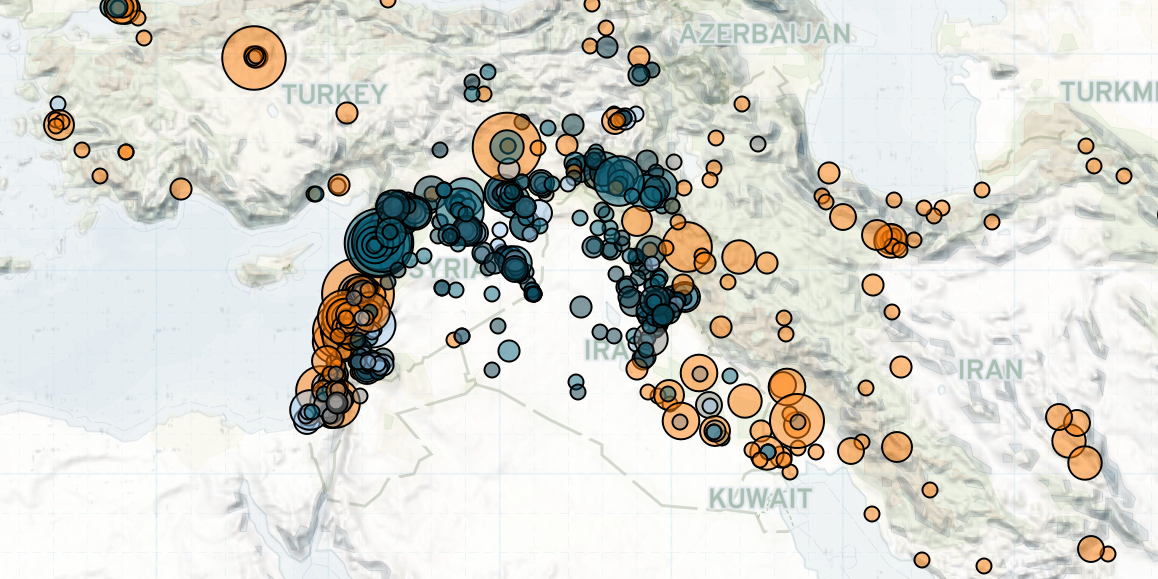 Last week in the Middle East, key developments include: reduced fighting between Houthi and pro-Hadi forces in Yemen amid the coronavirus outbreak, but increased fighting between pro-Southern Transitional Council (STC) and pro-Hadi forces around the city of Zinjibar; a return to mass demonstrations in Iraq; increased Islamic State (IS) activity in Iraq and Syria; continued Israeli airstrikes in Aleppo; and more clashes between Palestinians and Israeli forces in Palestine.

In Yemen, the coronavirus has spread throughout the country, stifling conflict in recent weeks. Aden has been hit particularly hard (Sky News, 18 May 2020), while doctors have repeatedly accused Houthi authorities in Sanaa of covering up the outbreak in areas under its control (Associated Press, 16 May 2020). As the outbreak worsens, fighting between Houthi and pro-Hadi forces has so far decreased.

Tensions between pro-Southern Transitional Council (STC) and pro-Hadi forces, however, have broken into open conflict, with the central focus being the city of Zinjibar, capital of Abyan governorate. Daily clashes occurred along the northern and eastern outskirts of the city as pro-Hadi forces fought to gain control, with conflicting reports on the outcome of the battles. The STC remains in control of the city itself. These clashes represent another sign of the complete failure of the ‘Riyadh Agreement,’ which initially offered some hope that conflict would abate in southern Yemen.

Last week in Iraq, demonstrations returned in full force as thousands of protesters affiliated with the October revolution took to the streets to reject the new government and call for elections. Demonstrations took place in several cities including Baghdad, where clashes were also reported between demonstrators and security forces. While the demonstrations in Baghdad were violent, most were less bloody than part demonstrations. For more on Iraq’s protest movement, see this recent ACLED report. The reduced level of violence follows an announcement by the new Prime Minister (PM), Mustafa Al Kazimi, emphasizing human rights and calling on security forces to practice self-restraint and refrain from using live ammunition on demonstrators (National Iraqi News Agency, 10 May 2020). The only incident with a reported fatality took place in Basra following a demonstration outside the headquarters of the Iranian-backed militia Thar Allah, where the party’s private security shot demonstrators, reportedly killing one and injuring four (The National, 11 May 2020). However, in a surprising move, Al Kazimi ordered police to detain those responsible for shooting at the demonstrators. Security forces raided the offices of the group, arrested members of the militia, confiscated weapons and ammunition, and launched an investigation into the shootings (The National, 11 May 2020).

These gestures, coupled with several concessions made by Al Kazimi – such as reinstating and promoting Lieutenant General Abdul Wahab Al Saadi to the counterterrorism forces, along with the release of detained demonstrators – could be why the organizing committees in multiple provinces announced that they would not escalate demonstrations until after Eid this weekend. The stated intention is to wait and see if Al Kazimi follows through with his promises. However, this may be unlikely, as the PM will face substantial resistance from both the militias and the security forces if he decides to pursue trials for members accused of using force against demonstrators. If he fails to meet these commitments, a new wave of protest activity can be expected following Eid, especially as the country continues to gradually lift coronavirus restrictions.

Meanwhile, on 15 May, IS released a video announcing a new campaign against security forces in Iraq, citing several incidents over the last week (Iraq Newspaper, 15 May 2020). This announcement comes during the second consecutive month of heightened IS attacks on Iraqi forces and civilians.

In Syria, the string of attacks against the Syrian regime and Syrian Democratic Forces (QSD) by IS and unidentified gunmen continued unabated, with numerous reported fatalities. In particular, IS expanded its area of operations to the southern governorate of Dara’a, where they targeted regime troops. Regime forces also brought more military reinforcements to Dara’a, increasing tensions between the regime and former opposition fighters in the area. Elsewhere, Israeli airstrikes continued to target pro-Iran militia positions for the fifth consecutive week, conducting airstrikes in the outskirts of Aleppo city.

In Palestine, on 9 May, a new Israeli restriction came into force that criminalizes asset transfers intended to “facilitate, further, fund or reward a person for carrying out terror-related offenses” (Jerusalem Post, 11 May 2020). The Palestinian Authority sends money to those it considers to be political prisoners, many of whom are facing terrorism-related charges. The same day, rioters set fire to a bank in Jericho after discovering that the accounts of prisoners were frozen. Other demonstrations took place against banks throughout the week. Masked gunmen from the Al Aqsa Brigades, the armed wing of Fatah – the ruling party in the West Bank – joined demonstrations in several West Bank cities (Jerusalem Post, 11 May 2020).

Protests continued in Iran against unpaid salaries and unfavorable contracts. Multiple protests were related to the coronavirus pandemic, as drivers, hair salon owners, and gym owners demanded to either be allowed to re-open businesses or receive financial aid. There was also one report of a prison riot, but officials have denied that the incident took place.

After a recent resurgence, demonstrations came to a halt in Lebanon when a four-day lockdown was imposed at the end of the week. See this CDT Spotlight for more information on demonstration activity in Lebanon amid the pandemic.