Regional Overview: Central America and the Caribbean
17-30 May 2020 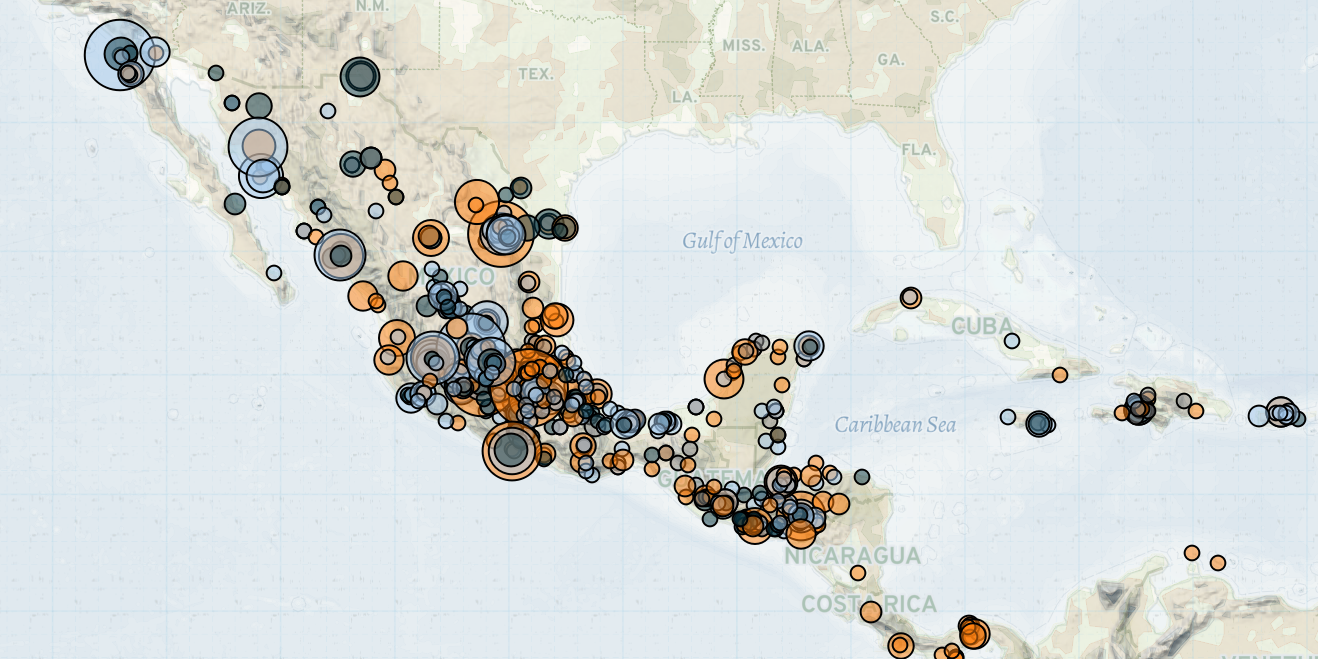 In Central America and the Caribbean, battles and violence targeting civilians increased during the last two weeks in comparison to the beginning of May. Inter-gang clashes grew deadlier through the end of the month, with a spike in reported fatalities stemming from these events. Demonstrations increased last week to their highest levels since the beginning of March. In addition to demonstrations calling for the provision of state subsidies and the resumption of work amid coronavirus-related restrictions around the region, anti-government protests took place in Mexico and Haiti.

Coronavirus-related demonstrations continued over the past two weeks, particularly with labor protests calling for the re-opening of stores and economic activity. In Dominica, Honduras, and Guatemala, transport workers took to the streets calling for a bonus and permission to work. In Honduras, between 18 and 21 May, transport workers and taxi drivers demonstrated in five departments. The discontent peaked on 27 May, when thousands of taxi drivers across the country staged demonstrations in nine different departments. Also, in Mexico, workers across the country continued to call for authorities to allow them to work or to provide financial aid. In Hidalgo state, the National Union of Agricultural Workers (UNTA) organized a series of simultaneous demonstrations that took place in at least 18 municipalities.

After criticizing Nicaragua for a lax response to the pandemic, authorities in Costa Rica restricted its border controls, prompting protests by truck drivers at border points in Costa Rica, Panama, and Nicaragua. Truck drivers were stranded and the move was criticized by neighboring countries due to its economic and humanitarian impact on the delivery of goods across Central America (CR Hoy, 27 May 2020).

In Saint-Martin, protesters on the French side of the island demanded the opening of the border after the Dutch side announced that coronavirus-related border checks would be suspended.

Social unrest stemming from coronavirus fears again led to multiple attacks on healthcare workers in several countries. In Haiti, a quarantine facility for coronavirus patients was destroyed and set on fire. In Mexico’s Hidalgo state, a group of people attacked doctors and nurses inside a hospital, accusing them of not providing proper care. The attack prompted protests by hospital workers calling for the presence of security forces to prevent attacks inside medical centers. In Yucatan state, a group of people set fire to the vehicle and house of a nurse fearing that she could be infected with the coronavirus. In Oaxaca state, residents of the Santa Maria Jacatepec municipality detained a group of health workers, and days later also detained the mayor and police officers who were ordered to rescue the health workers. In total, the community detained 12 people, who they blame for the death of a man infected with the coronavirus. In Oaxaca and in Chiapas states, residents destroyed vehicles and public buildings and looted stores, rejecting alleged sanitation operations. The residents rioted after misinformation had been circulated on social networks about the use of chemical products that are toxic and could cause injury.

Elsewhere in Mexico, the enforcement of coronavirus prevention measures also generated unrest. In Ocosingo and Tuxtla Gutierrez of Chiapas state, merchants clashed with police after the latter tried to enforce the closure of stores that failed to comply with the lockdown. In Veracruz state, city hall workers were attacked by a group of people who were at a cemetery attending a funeral. The government employees intervened in the gathering to demand the participants respect sanitation measures. Police officers in Chihuahua state were shot at while guarding the establishment of a health module.

Similarly, in Guatemala, three men shot a group of police agents enforcing the curfew imposed to prevent the spread of the coronavirus.

Countrywide protests against President Andres Manuel Lopez Obrador – also known as AMLO – led to a sharp increase in demonstration events in Mexico last week. The protests took place in at least 61 cities in 29 states and were organized by a new movement called ‘National Front against AMLO,’ which is led by businessmen and private sector leaders. The movement defines itself as a non-political organization with the objective of forcing the President to resign. The protesters criticize, inter alia, the President’s economic policies and accuse him of pushing a communist agenda. ACLED recorded major protests against the President throughout his first year in power in 2019, but last week’s demonstrations occurred in even more cities.

Fatalities stemming from cartel violence continued to increase, hitting levels not seen since February 2019 (for more information on how the COVID-19 pandemic has influenced gang activity in Mexico and the Northern Triangle, see this recent ACLED analysis piece). In Mexico, turf wars in Michoacán, Guanajuato, and Tamaulipas continued. In Michoacán, near Los Reyes, the Jalisco New Generation Cartel (CJNG) clashed with the so-called ‘Carteles Unidos’, a partnership of several cartels, including the Gulf Cartel, Los Zetas, and the Sinaloa Cartel to stop the advances of the CJNG (Infobae, 30 October 2019). In Huetamo, members of La Familia Michoacana left a vehicle with 12 bodies of alleged CJNG members who were killed in revenge for the death of the nephew of a member of La Familia Michoacana. The dispute between CJNG and Santa Rosa de Lima Cartel also intensified. Several deadly attacks on civilians were registered in Guanajuato, and threats were circulated against supporters of the rival cartels. In Salvatierra, five human fetuses were found, allegedly left by members of the Santa Rosa de Lima Cartel. In Guerrero state, a conflict between criminal groups and self-defense groups resulted in 12 fatalities. A clash in Chichihualco between Cartel del Sur and members of the Tlacotepec communal militia, also known as Policia Comunitaria Heliodoro Castillo, caused the displacement of around 200 people.

In Honduras, inter-gang battles and violence targeting civilians continued to increase after several weeks of low numbers during the coronavirus lockdown. In particular, fatalities stemming from battles between gangs spiked. In Copán department, an unidentified armed group killed a former congressman for the National Party, Hugo Pinto Aguilar, on 16 May in his house in El Paraiso. While the motive is still under investigation, the killing is likely linked to his ties with drug trafficking. Pinto was involved in the Los Pinto clan, one of the main groups controlling drug trafficking routes connecting the south of Honduras and the border with Guatemala, and an ally to the Valle Valle group (InSight Crime, 25 May 2020). Western Honduras, including Copán department, became even more violent due to a power vacuum caused by the arrest of several leaders of the Valle Valle clan in 2014 (InSight Crime, 10 September 2019).

National authorities in Guatemala declared a State of Emergency after territorial disputes escalated in Nahualá, Santa Catarina Ixtahuacan and Santa Lucia Utatlan of Solola department. Clashes between residents of Nahualá and Santa Catarina Ixtahuacán resulted in at least four deaths and eight injuries. The land dispute has persisted for more than 100 years and according to some has recently intensified due to the lack of dialogue between the communities (La Hora, 30 May 2020).

In Haiti, anti-government protests calling for the immediate resignation of the country’s President – whom they blame for the ongoing political and security crisis in the country – were met with police intervention. Elsewhere, tensions between various armed groups escalated when the infamous former police officer Jimmy Cherisier, also known as “Barbecue,” and gang leader “Ti Junior” formed a coalition and attacked other armed groups in the Port-au-Prince La Saline and Cite Soleil neighborhoods. The violence comes after comments by Barbecue that he would “clean” the streets in response to the Justice Minister’s ultimatum to gang members in the city. In the past, Barbecue has been involved in two massacres in Port-au-Prince, one of which took place in the La Saline neighborhood (Human Rights Watch, 28 April 2020).

In Jamaica, gang members clashed with police and military forces in August Town neighborhood in Kingston. During one clash, a disabled woman living in a residence for special needs people was killed. Rumors suggest she was shot by a soldier, leading to further tensions in the neighborhood.

In Martinique, protests took place over inadequate access to water. The southern part of the island has been without reliable access to water for some time. Furthermore, on 22 May, unknown individuals destroyed two statues of the French abolitionist Victor Schoelcher. The act took place on the day which is recognized in France as the Commemoration of the Abolition of Slavery.