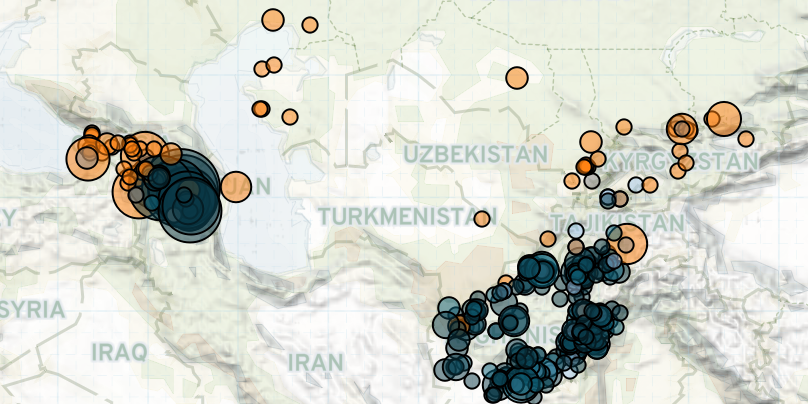 Last week in Central Asia and the Caucasus, clashes between Taliban and Afghan forces continued at lower levels in Afghanistan; opposition protests took place all over Kazakhstan; and fresh rounds of violence along the Kyrgyz-Uzbek-Tajik border resulted in casualties. Armenia and Azerbaijan continued to struggle with the coronavirus crisis, restricting movement for foreigners, as ceasefire violations remained at similar levels on the Armenia-Azerbaijan-Artsakh Lines of Contact.

In Afghanistan, as the three-day ceasefire introduced by the Taliban ended on 26 May, the group continued to attack Afghan forces. The deadliest attacks took place in Nangarhar, Badakhshan, and Zabul provinces, where tens of Afghan policemen and Taliban members were killed (New York Times, 4 June 2020). However, there was an overall decrease in armed engagements as the prisoner exchange continued through the past week, with the Taliban releasing a number of Afghan soldiers and policemen in Farah, Numruz, and Baghlan provinces. Meanwhile, the US military reported two airstrikes targeting the Taliban in Kandahar and Farah provinces, in order to prevent a coordinated Taliban attack on Afghan forces. The officials added that the operations were carried out in accordance with the agreement with the Taliban allowing the US to act in support of Afghan forces (VOA, 5 June 2020, also see the latest ACLED report on the US-Taliban peace deal). ACLED has not recorded a US airstrike targeting the Taliban since late April 2020, but Taliban sources periodically claim that Afghan and US airstrikes continue to take place, causing civilian fatalities. A recent report by the UN Assistance Mission in Afghanistan (UNAMA) also indicated that the majority of civilian casualties in April 2020 could be attributed to Afghan forces (UNAMA, 19 May 2020).

Another UN report was released on 27 May, underlining the Taliban’s ongoing relations with Al Qaeda and other groups such as Lashkar-e-Taiba and Jaish-e-Mohammad, embedded with Taliban forces (United Nations Security Council, 27 May 2020). The US Special Envoy to Afghanistan claimed that the report mostly covers the period before the peace deal, although he added that the Taliban’s failure to uphold its commitments would put the agreement at risk (RFE/RL, 2 June 2020). The peace deal requires that the Taliban prevent Al Qaeda from using Afghan soil (The Diplomat, 2 June 2020).

In addition to protests against coronavirus restrictions on small and medium-sized businesses in Kazakhstan (RFE/RL, 3 June 2020), major opposition demonstrations took place last week. Large groups of protesters including Democratic Party of Kazakhstan and Democratic Choice of Kazakhstan (DVK) members conducted rallies in Almaty and Nur-Sultan, with combined demands that the government provide debt relief for defaulting borrowers, stop political persecution of opponents, and release political prisoners (Euronews, 6 June 2020). In Almaty, a group of protesters also raised a banner reading “I can’t breathe” in support of George Floyd, whose murder has sparked demonstrations in the US (RFE/RL, 6 June 2020). Smaller anti-government demonstrations were staged in Semey, Shymkent, Kyzylorda, Uralsk, and Aktobe. Police intervened and dispersed all the protests, claiming that they did not comply with the new legislation on public gatherings that requires organizers to give the authorities a five-day notice. Last week, this rule was at the center of criticism about the new legislation (ACLED, 3 June 2020; VOA, 25 May 2020).

Violence continued along the border between Kyrgyzstan, Tajikistan, and Uzbekistan. On 31 May, a dispute over the use of a water source turned into a mass riot between villagers from Kyrgyzstan’s Chechme township and Uzbekistan’s Sokh exclave, resulting in dozens injured (RFE/RL, 1 June 2020). The incident brought a set of long-standing issues to the surface, as Sokh residents complained about a lack of economic opportunities, scarce natural resources, and limited access to the mainland during the visit of the Uzbek Prime Minister to the region (Gazeta.uz, 1 June 2020). However, these developments rarely lead to sustained peace in the region, as Uzbek-Kyrgyz border violence has been recurring for years. The deadliest incident took place in the border city of Osh in 2010, the tenth anniversary of which was marked this week (RFE/RL, 10 June 2020).

Meanwhile, coronavirus remains a serious threat in Armenia and Azerbaijan, as the number of infected cases has risen sharply in both countries since last week (JAM News, 10 June 2020). In the Armenian border town of Baghratashen, Russian citizens gathered at the border checkpoint and demanded permission to cross into Russia with their cars as part of their ongoing protests since the end of March. Residents of Turkey organized a protest with the same demand in Baku after Azerbaijan responded to the pandemic by introducing a stricter lockdown (Eurasianet, 4 June 2020).

Ceasefire violations on the Armenia-Azerbaijan-Artsakh Lines of Contact (LoC) continued at similar levels to weeks prior. Azerbaijan’s Ministry of Defense (MoD) reported 11 armed engagements along the LoC with Armenia and 42 armed engagements along the LoC with Artsakh. Additionally, Artsakh’s MoD reported 1,000 shots from Azerbaijani forces into Armenian positions and 100 ceasefire violations on the Artsakh-Azerbaijan LoC (Artsakh Republic Ministry of Defence, 6 June 2020).