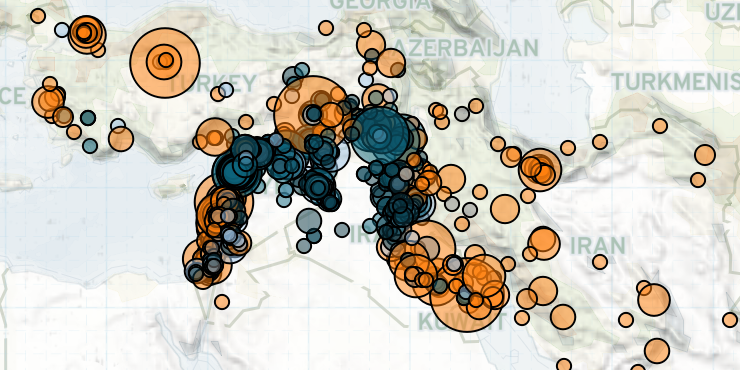 Across the Middle East, riots and protests increased last week amid a worsening economic crisis aggravated by the coronavirus pandemic. This trend was driven mainly by increased demonstrations in Lebanon, Israel, and Iraq, while anti-regime protests also took place in Syria. The Iraqi military and global coalition forces increased airstrikes against the Islamic State (IS) in Iraq, and the Saudi-led coalition also increased airstrikes in Yemen.

In Lebanon, demonstrations escalated last week as the movement against the political system announced a second phase and returned to the streets on 6 June. Despite the escalation, the movement is not as united as it was during the first phase. Many political parties, including the Progressive Socialist Party (PSP), have announced that they will not take part in the new demonstrations. Demonstrations also turned more violent, leaving 48 people injured on 6 June (France24, 6 June 2020). Controversially, some demonstrators are now calling for the disarmament of Hezbollah, which resulted in clashes between anti-Hezbollah and pro-Hezbollah demonstrators. If the movement continues to fragment, violence could rise.

Demonstrations also increased in Israel, where people gathered to demonstrate against the killing of an unarmed autistic Palestinian in Jerusalem the week before, as well as the Israeli plan to annex the Jordan Valley in July 2020.

Solidarity protests took place in Lebanon, Israel, and Turkey following the death of George Floyd in the US. Protesters condemned racism and police brutality in their own countries and expressed support for demonstrations in the US.

Meanwhile, IS activity has decreased, suggesting that the group’s limited resources are preventing it from sustaining a pattern of increased attacks over a prolonged period. At the same time, counter-IS operations launched by Iraqi forces and the global coalition intensified. Global coalition airstrikes reportedly killed 32 IS militants last week, with 19 killed in a single operation (Shafaaq News, 4 June 2020).

In Syria, anti-regime protests broke out in As-Sweida province under the banner “You are Starving Us” after the unprecedented and rapid fall of the Syrian pound against the US dollar and the sharp price hikes that followed. Meanwhile, Israeli warplanes launched airstrikes targeting regime and pro-Iran militia forces at the “Defense Factories” in Hama, resulting in multiple reported fatalities. In northwest Syria, regime and allied forces as well as Turkish, opposition, and Islamist forces brought in significant military reinforcements and fortified their positions last week. Along with the escalating intensity of fighting along the frontlines, this could potentially signal a resumption of large-scale hostilities in the northwest over the coming weeks.

In Yemen, the Saudi-led coalition continued to increase its airstrikes throughout the frontlines, despite co-hosting a UN humanitarian fundraising summit for Yemen to combat the dual threats presented by famine and the coronavirus (The Guardian, 2 June 2020). Clashes between Houthi and anti-Houthi joint forces decreased throughout Yemen as frontlines appeared to settle amid the widespread outbreak of the coronavirus. In areas north and east of Zinjibar city, the capital of Abyan governorate, infighting amongst anti-Houthi forces continued, albeit at a lesser degree than weeks prior.

Additionally, the Yemeni Coast Guard reportedly fought in a minor skirmish with the Eritrean Navy off the Hanish islands to the north of the Bab Al Mandab strait (Al Masdar, 4 June 2020). Two Eritrean vessels and seven Eritrean sailors were captured while reportedly attempting to hijack Yemeni fishing vessels in the area. An agreement between the governments was reached with Emirati mediation on 6 June in which the Eritreans were returned along with their boats. Additionally, around 120 detained Yemeni fishermen were promised to be released, of which 19 were actually freed (Al Masdar, 7 June 2020).

In Aden, public unrest from prior weeks manifested in a series of attacks on journalists, highlighted by the assassination of a videographer and photographer who previously worked with Agence France Presse, Ruptly, and other news organizations (Agence France Presse, 2 June 2020). A few days later, a Yemeni reporter for RT was evacuated by the Russian government after receiving death threats (Aden Al Ghad, 5 June 2020). In previous weeks, another journalist was released by Security Belt Forces in Lahij governorate after being held for a month and tortured (Belqees Rights, 30 May 2020). Yemen consistently ranks near the bottom of Reporters Without Borders’ World Press Freedom Index (RSF, 2020).