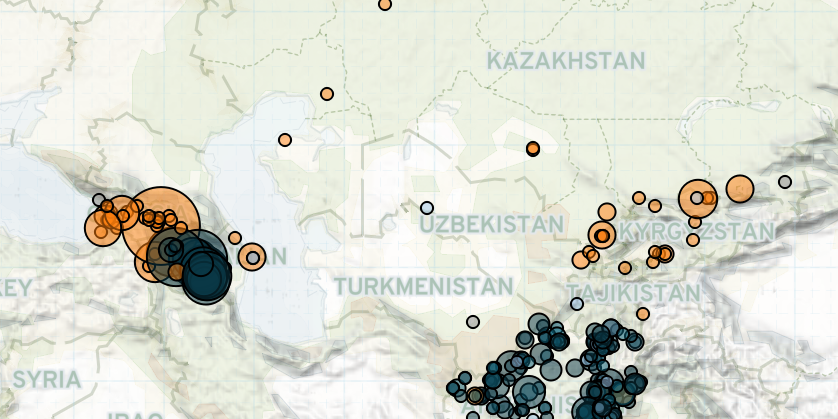 Last week in Central Asia, clashes between Afghan forces resulted in further civilian fatalities as coronavirus cases increased both in the country and reportedly within the Afghan army. In Kazakhstan and Uzbekistan, governments reintroduced coronavirus restrictions, followed by protests by various groups in both countries. Meanwhile, unrest continued along the Kyrgyz-Tajik border. In the Caucasus, ceasefire violations took place at higher levels relative to weeks prior along the Armenia-Azerbaijan-Artsakh Lines of Contact.

In Afghanistan, clashes between the Taliban and Afghan forces continued with Afghan forces repulsing attacks in Kandahar, Kabul, Khost, and Jowzjan provinces, reportedly killing 48 militants (Xinhua, 30 June 2020). Meanwhile, the Taliban released 21 more Afghan policemen and soldiers last week as a part of the peace deal with the US, and announced that the group would be ready to hold intra-Afghan talks one week after the last batch of Taliban prisoners are released (Afghanistan Times, 6 July 2020). However, as violence continues, President Ashraf Ghani once again pointed out that Taliban attacks may cause “serious challenges” to the upcoming peace talks (RFE/RL, 7 July 2020).

In a separate development, 23 civilians were reportedly killed last week as mortar shells struck a market in Sangin district of Helmand. While the Afghan government initially blamed the Taliban, the United Nations Assistance Mission in Afghanistan (UNAMA) reported that the Afghan army fired mortars, retaliating Taliban fire (Associated Press, 1 July 2020). UNAMA also urged both parties to spare resources to combat the coronavirus pandemic (UNAMA, 2 July 2020). The number of infected cases is rising in Afghanistan, increasing concerns about the country’s capacity to respond to the crisis (Arab News, 6 June 2020). Last week, NATO also announced that it would provide its “largest supply ever” of medical equipment to Afghan forces, as the pandemic has reportedly affected a large number of soldiers (VOA, 4 July 2020).

In Kazakhstan, the government reimposed coronavirus restrictions last week (Eurasianet, 29 June 2020), sparking protests in different parts of the country. The decision by Kazakh authorities to transform a high school into a temporary treatment center for infected patients was protested by residents of Shymkent. The lockdown announcement also caused people to rush to pharmacies to stock up on medicines; this has resulted in increasing prices and has created a medicine shortage (Ak Zhayik, 4 July 2020). Upon that, a group of women gathered at the Mayor’s Office in Nur Sultan, complaining about their decreased income due to the pandemic and the difficulties they face in supporting their household members needing medicines. Women’s groups have been protesting almost every week in Kazakhstan’s big cities, even during the initial lockdown, emphasizing their financial vulnerability and demanding state subsidies. Elsewhere in the country, workers of an oil field who were infected with the virus protested in North Buzachi and demanded improvements to the camp’s facilities. Throughout April and May 2020, workers of other oil fields in the Mangghystau and Atyrau regions have also protested their poor working conditions and their risk of exposure to the coronavirus.

Similarly, in Uzbekistan, the government introduced curfews in some parts of the country due to new coronavirus infections (APA 30 June 2020). Despite that, a major protest was organized at an automobile factory in Asaka after the death of two workers who did not get the necessary medical assistance they needed in time (RFE/RL, 2 July 2020). In the last few months, there have been reports of the poor working conditions in Uzbekistan’s automobile factories, including claims of both forced labor and ignored coronavirus infections amongst workers (RFE/RL, 17 April 2020).

Along the volatile border of Kyrgyzstan and Tajikistan, unrest continued. Members of a Kyrgyz family living in Kok-Tash village organized a protest after Tajik border guards authorized the demolition of their fence. However, there was no intervention from border guards or Tajik citizens, unlike in recent events in the region, which often turn into riots (see this recent ACLED report on unrest along the Kyrgyz-Tajik border).

Central Asia and the Caucasus Research Manager
Asena Karacalti is the Central Asia and Caucasus Research Manager at ACLED. She holds a BA in Law and an MSc in Cultural Anthropology and Development Studies from KU Leuven of Belgium. Her research interests focus on the transit experiences of migrant and refugee populations and political violence across the Middle East and North Africa. She has past experience as a lawyer and as an expert in migration and asylum organizations.
8 July 2020
Tags: AfghanistanArmeniaAzerbaijanKazakhstanKyrgyzstanTajikistanUzbekistan
Share this post
TweetShare on Twitter Share on FacebookShare on Facebook Share on LinkedInShare on LinkedIn

Asena Karacalti is the Central Asia and Caucasus Research Manager at ACLED. She holds a BA in Law and an MSc in Cultural Anthropology and Development Studies from KU Leuven of Belgium. Her research interests focus on the transit experiences of migrant and refugee populations and political violence across the Middle East and North Africa. She has past experience as a lawyer and as an expert in migration and asylum organizations.