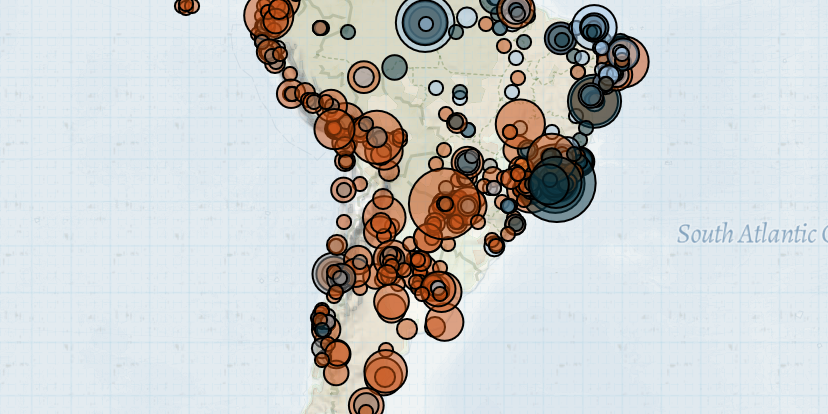 Last week in South America, key developments include: a slight decline in demonstrations over coronavirus-related issues across the region; continued armed clashes between criminal groups in Brazil; political killings and armed clashes between the military and the National Liberation Army (ELN) in Colombia; demonstrations by logging companies in Chile to demand more security in the Araucania region; and protests in Argentina both for and against the current administration.

The number of pandemic-related demonstration events decreased slightly in the region last week. In Venezuela, migrants protested in Apure state to demand their release from a complex where they have been quarantined for more than 20 days (Frontera Viva, 7 July 2020).  In the Cauca department, in Colombia, the son of a member the Guardia Indigena was killed by unidentified armed individuals. In addition to protecting communities from violent attacks, the Guardia Indigena in Cauca currently enforces measures to protect the indigenous communities from the coronavirus. In Valparaiso, Chile, citizens took to the streets over the economic effects of compulsory quarantine measures. Likewise, local groups held demonstrations against the delay in the delivery of essential food and supplies provided by local councils, which culminated in a clash between police forces and demonstrators. In Ecuador, transport drivers staged demonstrations in Quito, Cuenca, and Loja, to request the government to pay attention to the economic impact caused by the lockdown and social distancing measures. Demonstrators also called for the freezing of loan payments for a year, until they are able to financially recover from the crisis. In Argentina, health workers also demanded biosafety equipment and training to treat infected patients. Likewise, workers of the tourism and restaurant sector members of Union of Tourism, Hotel and Food Workers of the Argentine Republic (UTHGRA) blocked a road for three consecutive days to demand government assistance for temporary workers of hotels and restaurants.

In Brazil, several labor groups continued to stage protests calling for the reopening of businesses and commercial establishments. For the past four months, many cities have enforced lockdown and social isolation measures. However, the lack of coordination and effective control of the pandemic has led to confusion among business owners leading to  detrimental consequences for the workers. For essential workers, most of the protests called for safer working conditions and the payment of delayed wages. In Rio de Janeiro, tourism professionals held a protest demanding the payment of financial aid due to the coronavirus pandemic.

Meanwhile, the number of clashes between armed groups and state forces remained steady in Brazil, while organized criminal groups continued to dispute territories across the country. Territorial disputes between the Red Command (CV) and the Third Pure Command (TCP) were reported in the North Zone of Rio de Janeiro and in Niterói, with one reported fatality. In Rio de Janeiro city, the CV invaded a community controlled by a police militia group, and intense shoot-outs were reported. The Military Police occupied the area and three drug trafficking suspects were shot and killed. The operation was considered an exception to the current prohibition of police operations in the city. A recent report released by the Civil Police identified 1,413 communities in Rio de Janeiro state where organized criminal groups are conducting their activities (Globo Extra, 6 July 2020). Drug trafficking groups control 81% of those communities, while police militia groups control 19%. The report also illustrates that the number of drug traffickers is larger than the Military Police force.

In Colombia, political killings continued to be reported across the country. In Medellín, a transgender woman was killed by unidentified armed individuals; she is the second LGBT victim to be killed in the city within one week. In the Cauca department, two members of the Afro-Colombian ethnic group were killed by unidentified armed individuals. In the Huila department, the president of the Council of Communal Action (JAC) was killed. In Bogotá, a group of social leaders protested to demand justice and actions against the killings of social leaders, indigenous people, farmers, and members of the LGBT community (El Espectador, 10 July 2020).

Also in Colombia, an armed clash took place between members of the ELN and military forces in Norte de Santander, which led to one death and three injured ELN members. The deceased was a leader of the armed group, who provided over 70 million Colombian Pesos a year for the ELN (Diario La Opinion, 5 July 2020).

Indigenous groups demanding land restitution from areas controlled by forestry companies often carry out attacks on the Araucania and Biobio regions. Following a series of raids and arson attacks led by indigenous militias in Chile, workers from logging companies held a protest demanding security improvements in Araucania region. The group blocked the main highway of the country calling for the deployment of additional troops in the area (Biobio Chile, 6 July 2020).

Finally, in Argentina, on 9 July, Argentina’s Independence Day, there were several protests across the country, both for and against President Alberto Fernández’s administration. His opponents were frustrated with the house arrest of a businessman involved in a corruption scandal, as well as the government’s intentions to nationalize the grain exporter company Vicentin. The group also called for the end of the mandatory social isolation policy. In some cases,  demonstrators questioned the policy’s effectiveness and the death rate caused by the coronavirus pandemic in the country (La Nación, 10 July 2020).