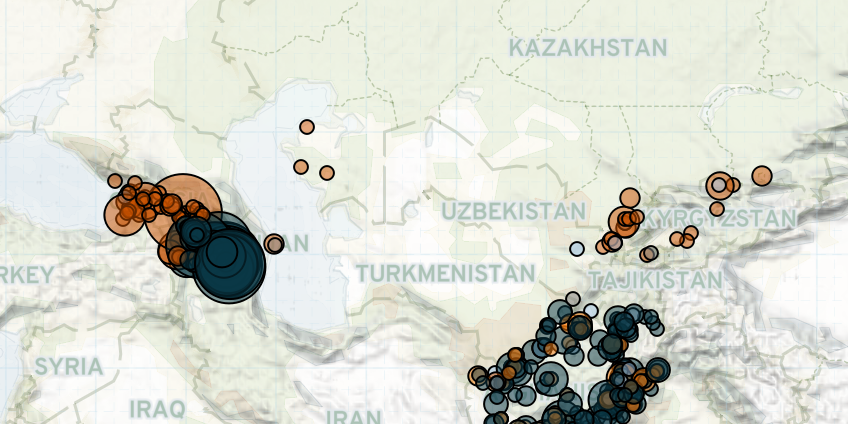 Last week in Central Asia and the Caucasus, despite intense clashes between the Taliban and Afghan forces, both parties continued to release prisoners as part of the US-Taliban deal, raising hopes about imminent intra-Afghan peace talks. Additionally, cross-border clashes and shelling took place between Afghan and Pakistan militaries. A sudden flare-up in the Armenia-Azerbaijan border resulted in dozens of casualties as the deadly clashes triggered a pro-war riot in Baku. Moreover, ceasefire violations along Armenia-Azerbaijan-Artsakh Lines of Contact took place at higher levels, while violence continued along the Kyrgyz-Tajik border.

In Afghanistan, clashes between the Taliban and Afghan forces increased last week. As the Taliban conducted its deadliest attacks in Kunduz and northern Samangan provinces, Afghan forces targeted Taliban militants in Dahana i Ghuri district of Baghlan province where 50 militants were reportedly killed during a two-day battle (Xinhua, 18 July 2020). Meanwhile, for the second week in a row, the Taliban used a car bomb targeting Afghan forces, killing 12 members of the National Directorate of Security in the northern Samangan district. The attack also resulted in a large number of civilians injured (Khaama Press, 15 July 2020).

However, despite rising tensions, both sides continued to release prisoners as part of the peace deal between the US and the Taliban. So far, the Afghan government has freed over 4,000 Taliban militants, and the Taliban has freed 850 government prisoners. This comes closer to the numbers in the initial agreement requiring the release of 5,000 Taliban and 1,000 government prisoners before the prospective intra-Afghan talks (Afghanistan Times, 22 July 2020).

Separately, across the border with Pakistan, at least six civilians were killed in Afghanistan’s Kunar province during cross-border shelling by Pakistan’s military (Al Jazeera, 16 July 2020). Earlier on the same day, clashes between Afghan and Pakistani border forces broke out as Pakistani soldiers tried to set up a check post on the Afghan side of Durand Line, the disputed demarcation between the two countries where shelling and clashes occasionally take place. The last time Pakistan reportedly shelled the other side of the border was in January 2020, and before that in October 2019, when three civilians were killed.

Last week was also marked by an escalation in the conflict between Armenia and Azerbaijan. The clashes on the Tavush-Tovuz part of the border started on 12 July and lasted until 16 July. Both sides used artillery, tanks, and drones. On 12 and 13 July, a total of at least four Azerbaijani soldiers were killed, and four Armenian soldiers were wounded. On 14 July, the number of clashes peaked as 11 Azerbaijani and four Armenian soldiers were killed. An Azerbaijani civilian was killed as well. Both sides blamed each other for the provocation. The clashes triggered patriotic reactions while the media — which is highly state-controlled in both countries — relied uncritically on official sources (Eurasianet, 22 July 2020). Following the clashes, thousands of pro-war demonstrators marched in Baku; some entered the parliament building after breaking windows and clashing with police (BBC, 15 July 2020).

Accordingly, the ceasefire violations continued at higher levels on the Armenia-Azerbaijan-Artsakh Line of Contact (LoC) last week. Azerbaijan’s Ministry of Defense (MoD) reported 95 armed engagements on the Artsakh-Azerbaijan LoC and 20 on the Armenia-Azerbaijan LoC. Moreover, the Artsakh MoD documented around 6,000 shots from Azerbaijani forces into Armenian positions and more than 500 ceasefire violations on the Artsakh-Azerbaijan LoC (Artsakh Republic Ministry of Defence, 18 July 2020). Additionally, the Ministry of Foreign Affairs in Armenia documented around 190 armed conflict events initiated by Azerbaijani forces targeting Armenian and Artsakh positions during the month of June 2020, marking no significant change from its May 2020 report.

Finally, as Central Asian countries deal with the coronavirus and extended lockdowns (RFE/RL, 14 July 2020), another dispute occurred on the Tajik-Kyrgyz border. A group of Kyrgyz nationals threw stones at a car belonging to the Vorukh administration representative from Tajikistan as it was passing the Kyrgyz territory. This was the third such incident this year in the Batken region (see this recent ACLED report on unrest along the Kyrgyz-Tajik border).