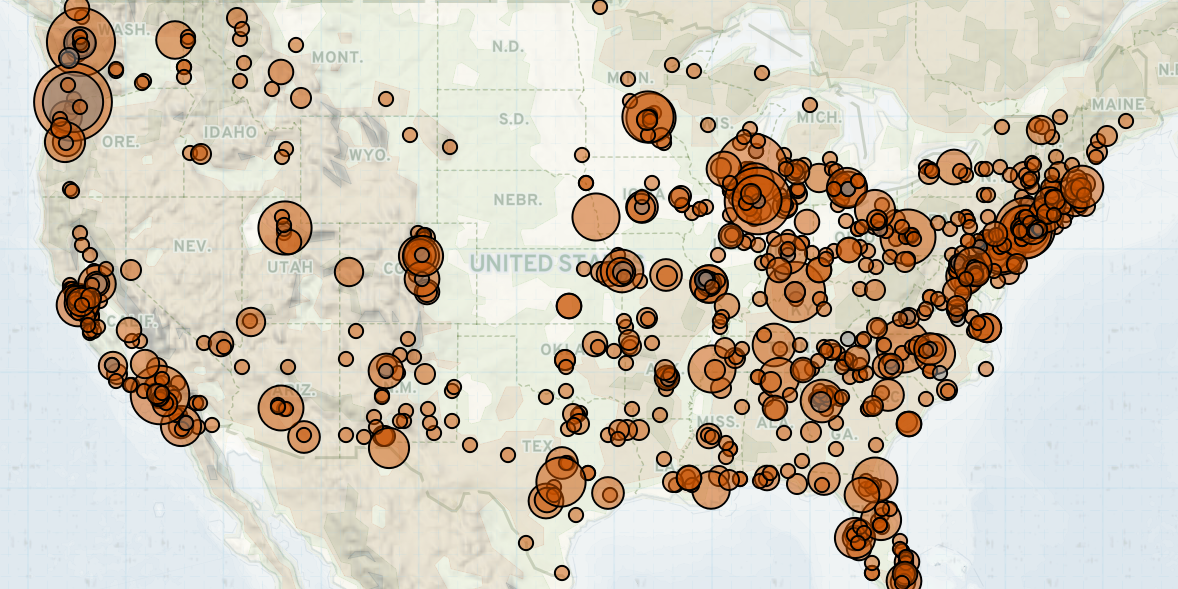 Last week in the United States, demonstration levels remained static. Workers in several cities walked off from their jobs in support of the Black Lives Matter (BLM) movement, demanding racial and economic justice. A rally associated with BLM, held by members of an armed Black militia group, remained peaceful in Louisville, Kentucky, whereas a demonstrator was fatally shot at a protest associated with BLM in Austin, Texas. Clashes between demonstrators and federal agents continued in Portland, Oregon, and several demonstrations were reported across the country in solidarity with demonstrators in Portland. Meanwhile, protesters in the US demanded the continuation of online learning for school-aged children amid the coronavirus pandemic. Finally, the case of a teenager in Michigan who has been detained for violating the terms of her probation by not doing her homework has led to a nationwide outcry for her release.

Demonstrations affiliated with the BLM movement continued across the US over the past week, with more than 160 demonstration events reported in 35 states. In an effort to unite “the interconnected fights for racial and economic justice,” essential workers in almost 30 cities walked off their jobs and held rallies as part of a nationwide “Strike for Black Lives” day of protest on 20 July (USA Today, 20 July 2020). Janitors, fast-food workers, nursing home aids, rideshare, and other workers held the strike and protest action in remembrance of George Floyd, Breonna Taylor, Elijah McClain, and other Black people killed by police. Participants also demanded that corporations raise wages, provide health care benefits and paid sick leave, and give workers the right to join a union. Protesters called for the Senate to pass the Health and Economic Recovery Omnibus Emergency Solutions (HEROES) Act, a stimulus package in response to the coronavirus pandemic. The number of Black people working in front-line jobs impacted by the pandemic is disproportionately high; while Black people make up 13% of the US population, they account for 27% of licensed nurses and healthcare supporters, and 20% of food preparation and serving workers (Fortune, 20 July 2020). According to the Poor People’s Campaign, an estimated 54% of Black workers receive less than a living wage (Washington Post, 8 July 2020).

Elsewhere, a demonstration was held in Louisville, Kentucky by members of an Atlanta-based Black armed militia, the Not Fucking Around Coalition (NFAC), in support of the Black Lives Matter movement. They demanded justice for Breonna Taylor, a Black emergency medical technician who was accidentally fatally shot by police in Louisville last March. Demonstrators called on local and state officials to speed up and be more transparent about the investigation into Taylor’s shooting. Otherwise, the leader of the group warned that authorities “can expect more outrage from local residents and outside activists” (Courier Journal, 25 July 2020).

Meanwhile, armed members of the far-right militia group, the Three Percenters, held a counter-rally, stating that they were responding to NFAC’s presence in Louisville and were there to “aid police” in maintaining order (Reason, 29 July 2020). Although there were concerns about a possible outbreak of violence between the two heavily armed groups, beyond some verbal sparring, the event remained largely peaceful and police in riot gear kept the two sides apart from one another. Prior to the start of the event, the weapon of a NFAC member was accidentally discharged, injuring three other members of the group. Armed members of NFAC had also held a rally in Atlanta, Georgia on 4 July, calling for the removal of a Confederate monument. There are reports of a growing interest among African Americans in gun ownership and in joining Black gun-owner organizations as a tool of both empowerment and self-defense (Politico, 26 July 2020). According to the president of the National African American Gun Owners’ Association, “his organization’s annual membership has increased by as much as 2,000 new members per day — a figure he used to see annually” (Politico, 26 July 2020).

Following the deployment of federal law enforcement agents “with no known training in crowd control,” tensions have escalated in Portland, Oregon (Washington Post, 28 July 2020). Demonstrations continued in the city over the last week, with several instances of violent confrontations reported between demonstrators and federal agents. Portland’s Democratic mayor, Ted Wheeler, who joined a protest on 22 July to stand with protesters in the face of what he has described as an “occupying force,” was among those tear gassed by federal agents outside the federal courthouse (Washington Post, 23 July 2020). Carrying signs saying “Tear Gas Ted,” some demonstrators heckled Wheeler, shouting at him about the Portland Police Bureau’s use of tear gas before federal agents arrived and demanding his resignation (New York Times, 25 July 2020). Separately, activist mothers have formed a group referred to as the “Wall of Moms” that attempts to act as a human barricade between demonstrators and federal agents. Some activists suggest that the “Wall of Moms’ momentum demonstrates how widespread the movement against racism and police brutality has become” (New York Times, 29 July 2020).

Over a dozen demonstrations around the US were also reported in solidarity with demonstrators facing off with federal authorities in Portland. A few demonstrations, including those in Los Angeles, Oakland, and Sacramento, California; Richmond, Virginia; and Seattle, Washington turned violent as demonstrators clashed with police. In Seattle, carrying signs stating “Feds Go Home,” some among the crowd of approximately 5,000 demonstrators broke windows of businesses, vandalized the King County Juvenile Detention Center, and lit several construction trailers on fire (New York Times, 25 July 2020). Police responded by firing tear gas, flash grenades, and pepper spray and arresting at least 47 people. According to the police, 59 officers were injured from having large rocks, fireworks, and other explosives thrown at them, with one hospitalized due to a leg injury caused by an explosive (CNN, 26 July 2020).

In another violent incident, a demonstrator affiliated with the BLM movement was fatally shot in Austin, Texas on 24 July. According to police and witnesses, a car turned aggressively toward marchers before it apparently hit a barrier and stopped. The victim, who was armed, approached the car when the driver opened fire and killed him. Another demonstrator reportedly shot at the car after it drove away. The biggest unknown remains what happened in the critical seconds before the shots were fired. The driver and some witnesses claim that the victim pointed an assault rifle at the driver (ABC, 27 July 2020), while some demonstrators at the scene dispute this account (Dallas Morning Post, 27 July 2020). In Texas, a state with liberal gun laws, demonstrators on “both the left and the right often carry rifles at protests” (New York Times, 26 July 2020).

Meanwhile, amid the coronavirus pandemic, dozens of demonstration events took place across the country with teachers, parents, and students showing their opposition to plans to restart in-person teaching at schools in the fall. Raising concerns that safety protocols, such as social distancing, are not enough to keep students and staff safe, protesters demanded a continuation of online education. The American Federation of Teachers has announced that it will back safety strikes should schools reopen before certain criteria are met, including a reduction of the daily coronavirus infection rate below 5% and a transmission rate below 1% (AFT, 28 July 2020). The Trump administration has been pushing for states to reopen schools this fall (NPR, 7 July 2020). President Donald Trump threatened to withhold federal funding from schools that do not reopen (Guardian, 17 July 2020), accusing Democrats of opposing the plans for political reasons. But last week, he softened his stance, acknowledging that some schools may have to reopen later (Time, 23 July 2020).

Students, teachers, and activists have also staged several demonstrations in recent weeks to demand the release of a 15-year-old Black girl from juvenile detention in Oakland County, Michigan for violating her probation by not completing her online schoolwork. The student, who was initially charged with assault for biting and pulling her mother’s hair and later stealing a fellow student’s phone, has been detained since mid-May. On 20 July, a judge refused a motion to release her, although the prosecutor recommended the release (New York Times, 21 July 2020). According to the girl’s family and her lawyer, she has ADHD and struggled with learning after the school switched to distance learning during the pandemic. Advocates have been arguing that her case is an example of racism in the criminal justice system (CBC, 24 July 2020). Several thousand people have signed online petitions to demand her release and the Michigan Supreme Court is reviewing her case (BBC, 17 July 2020).