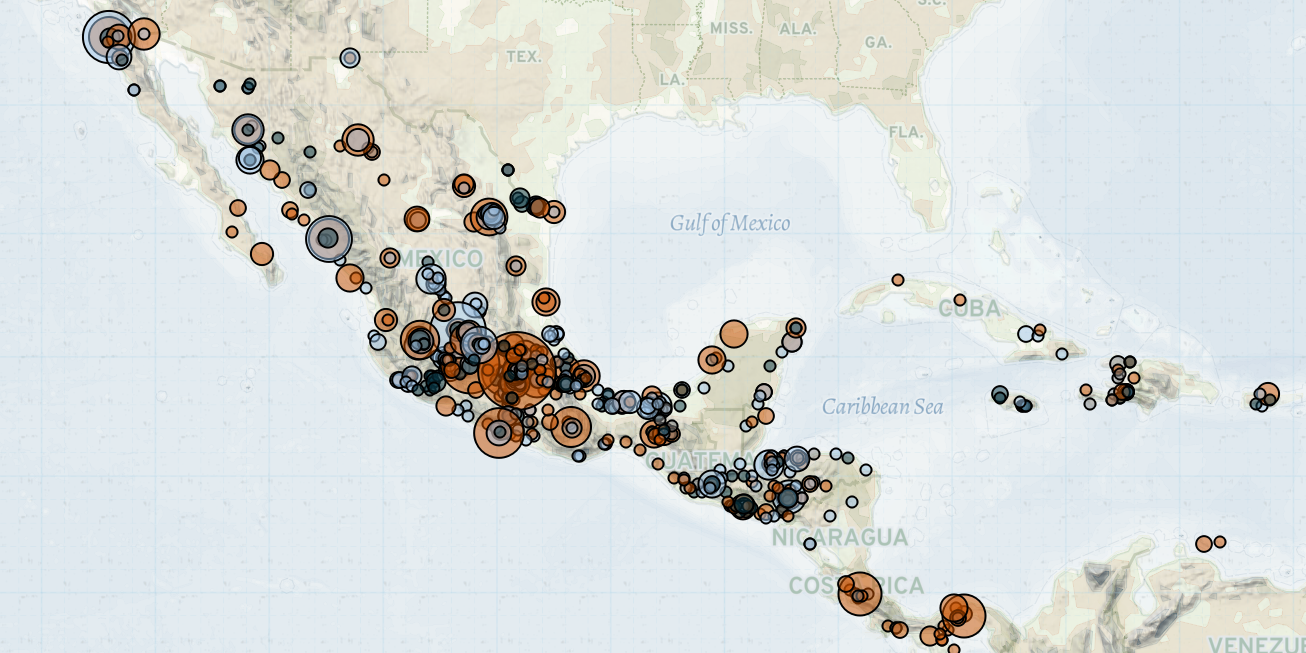 Demonstrations continued at similar levels to previous weeks across Central America, with demands centered on the provision of state subsidies to combat the coronavirus and the resumption of work. Unrest and protests were reported over a bilateral water treaty, abortion, and same-sex marriage legal provisions in Mexico, in addition to anti-government protests. Meanwhile, battles remained high last week with violent clashes involving organized crime groups reported in Mexico. Despite a slight decrease in violence against civilians, political actors, activists, and journalists continue to be the victims of targeted attacks in Guatemala, Haiti, Honduras, Nicaragua, and Trinidad and Tobago.

The economic fall-out from coronavirus-related restrictions continued to trigger protests across Central America last week. In Costa Rica, Honduras, and Mexico, workers across different sectors protested to demand state support and the resumption of economic activities as steep economic shrinking and job losses were announced in the three countries (Reuters, 31 July 2020; Reuters, 30 July 2020; Reuters, 12 June 2020). In Antigua and Barbuda, protesters gathered in the capital against the extension of the state of emergency until October, while in Guatemala, localized confinement measures in San Lucas Toliman generated unrest. In the latter, demonstrators set fire to the municipality building and to two vehicles after the area was placed in “red zone” territory due to the presence of coronavirus cases. Despite rising coronavirus cases, Guatemala began reopening its economy on 21 July, while a large number of municipalities continue to be severely affected by the sanitary crisis. Meanwhile, in El Salvador and Mexico, health workers protested, asking for additional testing and resources to treat coronavirus patients. In the state of Chiapas, Mexico, health workers participated in widespread protests against the imprisonment of a doctor accused by a local politician of raising his fee to treat a relative infected with the coronavirus.

Elsewhere in Mexico, another wave of anti-government protests led by the National Front against AMLO (FRENA) were reported in at least 39 cities. The movement, which originated from a coalition of corporate leaders, has rejected the policies of President Andrés Manuel López Obrador. In addition, FRENA initiated a new form of protest: sit-ins in public squares were organized in 29 cities. According to public opinion polls, the approval rating of the president has decreased over the past month, with around 47% approval reported in June (El Economista, 30 July 2020). Members of FRENA have been criticizing the president for opposing a coronavirus bailout intended for private companies.

Amendments of penal codes over abortion and same-sex marriage triggered protests in Haiti and Mexico. Ahead of the ruling of the Supreme Court of Justice of the Nation (SCJN) on a project aiming to harmonize Mexico’s penal code with international treaties on discrimination and violence against women, protests were reported across several states. Members of the National Front for Family protested against the legalization of same-sex marriage and abortion in several municipalities of Baja California and in Ciudad de Mexico. The National Front for Family is a coalition of 1,000 organizations formed in 2016 against an initiative to legalize same-sex marriage. Counter-protests organized by LGBT members and feminist groups were also reported. Following the rejection of this legal framework by the SCJN, additional protests by feminist groups were reported in the state of Veracruz. Meanwhile in Haiti, thousands of Christians took to the streets in several regions to protest against the new penal code which, according to false rumors, sets provisions to fine pastors that refuse to perform same-sex marriages.

In the state of Chihuahua, Mexico, the controversy over a bilateral water treaty between Mexico and the United States sparked unrest. Farmers set fire to public buildings and cut off train tracks with burning vehicles to demonstrate against the release of water from the Las Virgenes dam to repay an alleged water debt to the United States. The US government contacted Mexico, calling it to comply with the 1944 Treaty setting provisions for the use of water in the Rio Grande, and under which Mexico owes its neighbors 512 million cubic meters of water yearly. Demonstrations over this issue continued for the second consecutive week.

In addition to protest activity, territorial disputes between cartels continued last week in Mexico. In the Aguililla municipality, 11 people died after members of the Jalisco New Generation Cartel (CJNG) clashed with the United Cartel (CU) — an alliance of cartels and organized crime group cells seeking to recover territories held by the CJNG (Infobae, 27 July 2020). In the neighboring Tepacaltepec city, security forces and members of a local militia also clashed with the CJNG to prevent the cartel’s incursion into the municipality. By some accounts, the United Cartel has been financing self-defense groups in the area to fight the CJNG. Recently, reports have been circulating on the forceful recruitment of teenagers to participate in clashes (El Blog del Narco, 1 August 2020). Meanwhile in Tamaulipas state, the Gulf Cartel exhibited the burning bodies of members of the rival North-East Cartel following a clash over the control of Ochoa, a community bordering the United States.

In El Salvador, the law enforcement crackdown on organized crime led to two mass arrests of 57 M-13 members and 25 gang members in San Miguel and Conchagua. In April, President Nayid Bukele took harsh measures against gang members, authorizing security personnel to use lethal force for self defense or “defense of El Salvadoran citizens.” Large-scale operations led to the arrest of over a hundred gang members accused of extortion as part of a state crackdown (El Mundo, 2 May 2020). Over the last year, homicide rates have been decreasing in El Salvador, although the drop has been attributed to a truce between gangs rather than the result of law enforcement operations (Insight Crime, 28 July 2020; Associated Press, 29 April 2020). For more, see this recent ACLED analysis piece.

Gang activities in the region continue to threaten the livelihood of civilians. In Haiti, the leader of the Baz Gran Grif Savien gang publicly threatened journalists on the radio, following a protest against rising insecurity. Shortly thereafter, a journalist was attacked by armed men. Violence against the press has been escalating in Haiti. This year alone, ACLED recorded 5 attacks targeting journalists. In Mexico, three people were killed by the Santa Rosa de Lima Cartel in Yuriria municipality, Guanajuato.

Political actors likewise continue to be targeted across the region. In Trinidad and Tobago, tensions are rising prior to the upcoming general elections, set to be held on 10 August. The house of a candidate was attacked by several gunmen, and posters of his party were defaced and torn down. In Guatemala, the mayor of San Cristobal Cucho was intercepted by several armed men, and was shot and injured. The exact motive of the attack remains unclear. In Nicaragua, a man threw an explosive in the Blood of Christ cathedral in Managua. Although the motive of the attack is yet to be established, the Catholic church has been a known political opponent of the Ortega regime. This is the third attack targeting a church in the last two weeks.