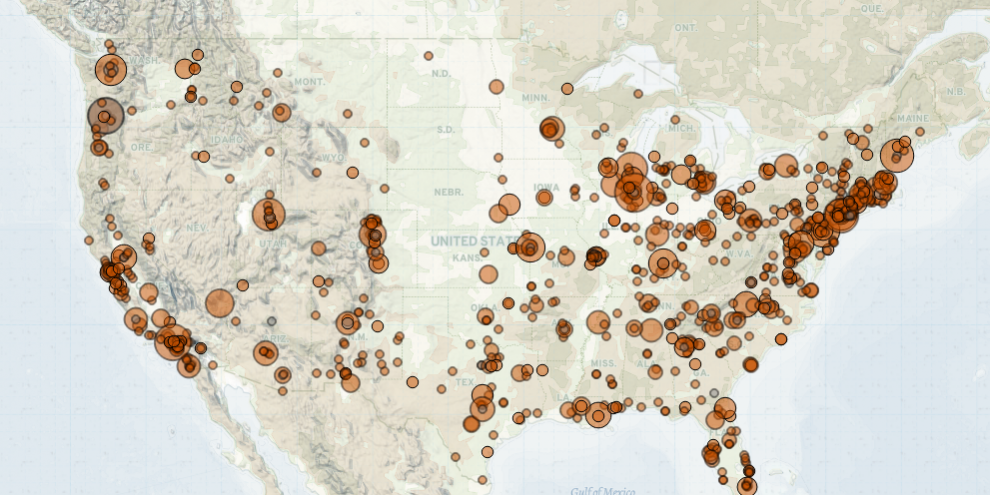 Last week in the United States, demonstrations associated with the Black Lives Matter (BLM) movement continued, although at a diminished rate. Tensions rose between right-wing and left-wing groups in Georgia, Michigan, and Oregon. In Chicago, Illinois there was a new round of looting sparked by a police shooting and a violent demonstration (for more on the increase in confrontations between demonstrators and counter-demonstrators, see the US feature in the new mid-year update to ACLED’s special report on 10 conflicts to worry about in 2020). Demonstrations over issues related to the coronavirus pandemic constituted the highest number of demonstration events, similar to the week prior (for more, see this spotlight report from ACLED’s COVID-19 Disorder Tracker). Lastly, demonstrations broke out over cost-cutting measures to the United States Postal Service (USPS), which could impact mail-in voting in November’s election.

The number of demonstrations associated with the BLM movement continued to decrease last week, making up about 25% of all demonstrations in the country. While the majority were peaceful, at least three clashes between right-wing demonstrators and left-wing supporters of the BLM movement were reported during the week. In the Atlanta suburb of Stone Mountain, Georgia, members of far-right groups, including Confederate States III%, Georgia Security Force III%, and III% American Brotherhood of Patriots — many armed and carrying Confederate flags — demonstrated on 15 August. The demonstration was organized in support of maintaining Confederate symbols and in response to a protest held by the Not Fucking Around Coalition, a Black militia, at Stone Mountain Park on 4 July, which called for removal of a giant sculpture of Confederate leaders. The right-wing groups also voiced their support for President Donald Trump. Anti-racist and anti-fascist demonstrators held a counter-demonstration, organized by FLOWER, an Atlanta-based frontline organization working to end racism. Other groups, including the National Association for the Advancement of Colored People (NAACP), were also present, as well as far-left anarchists and socialists — some of them heavily armed. Many of the counter-demonstrators wore BLM T-shirts, while right-wing demonstrators carried All Lives Matter banners (Atlanta Journal-Constitution, 15 August 2020).

After the two opposing sides engaged in scuffles, rock-throwing, and pepper-spraying, police backed by a SWAT team and the Georgia National Guard intervened and dispersed the crowd. According to the police, no major injuries, property destruction, or arrests occurred at the event (WSB-TV, 15 August 2020), and local and national news outlets described the event as largely free of serious violence (Atlanta Journal-Constitution, 15 August 2020; New York Times, 15 August 2020). However, a journalist at the scene described the event as “some of the most intense street violence between left and right I’ve seen since Charlottesville,” and there appeared to be multiple tense encounters between armed demonstrators (Ford Fischer, 15 August 2020).

On 15 August, clashes between demonstrators were also reported in Kalamazoo, Michigan. Members of the far-right Proud Boys — designated as a hate group by the Southern Poverty Law Center (SPLC, 2019) — demonstrated in support of the police. They were met by a group of counter-demonstrators associated with the BLM movement, including members of the anti-fascist Michigan People’s Defense League. According to authorities, multiple groups were “visibly armed with a variety of weapons, including guns” and a three-foot wooden club was confiscated (CNN, 16 August 2020). The two sides got into physical fights before police used pepper spray to disperse the crowd and arrested multiple demonstrators.

Furthermore, a demonstration was held in support of law enforcement and against anti-fascists in Portland, Oregon by a crowd that included armed members of Patriot Prayer, a far-right group led by US Senate candidate Joey Gibson (SPLC, 4 August 2020). Supporters of the BLM movement gathered across the street, and soon the groups clashed, with videos showing several pro-police demonstrators using pepper spray and paintball guns (Washington Post, 17 August 2020). According to witnesses, a car drove out of a parking garage and two gunshots were fired (KOIN, 15 August 2020). After the event, police arrested a right-wing demonstrator for allegedly firing the shots at BLM counter-demonstrators (OPB, 19 August 2020). Patriot Prayer has been holding rallies in the Pacific Northwest since early 2017 alongside the Proud Boys, attracting “a wide array of racist and anti-government extremists” (SPLC, 1 August 2018), and singling Portland out as a battleground to fight “antifa” (Washington Post, 17 August 2020).

Violence was also recorded over several days in Chicago, Illinois last week. Looters ransacked high-end stores downtown and in the North Side overnight from 9 to 10 August, reportedly injuring 13 police officers and causing estimated damages of tens of millions of dollars (ABC7, 18 August 2020). According to Chicago police, the unrest was sparked by police officers shooting and wounding a 20-year-old man in the Englewood neighborhood on the South Side. The man had first shot at police officers (Daily Chicago News, 10 August 2020). A crowd of about 30 people faced off against officers shortly after the shooting. According to police, the crowd turned “very hostile” when a large number of police officers lined up as the crime scene was processed (Chicago Tribune, 10 August 2020). Mayor Lori Lightfoot suggested that a “false rumor on social media” that police had shot a child was what sparked the unrest. She insisted that the overnight looting was not a protest and represented “straight-up felony conduct” (CNBC, 10 August 2020). Activists and residents of Englewood have pushed back on suggestions connecting them to the looting, and none of the 43 defendants who appeared in court this week on felony charges appeared to be from the neighborhood (Chicago Tribune, 14 August 2020).

On 15 August, violence once more erupted in Chicago. While a protest during the day held by about 200 people against police brutality remained peaceful, “multiple agitators used black umbrellas, changed their appearance and assaulted officers” during a separate demonstration near downtown, according to the Chicago Police (CNN, 16 August 2020). Twenty-four demonstrators were arrested, and 17 officers suffered non-life threatening injuries. Mayor Lightfoot praised city police for “fairly quickly” settling the demonstration, but some activists and other elected officials criticized police for using chemical irritants and striking demonstrators with batons (Time, 16 August 2020). Since the death of George Floyd, dozens of protests have taken place in Chicago against police brutality. The city has had a long history of police brutality against the Black community, with a 2017 Justice Department report indicating that officers used force almost 10 times more often with Black suspects than with white suspects (NBC, 4 June 2020).

The White House has been applying pressure to colleges and universities to resume in-person teaching this fall (Washington Post, 9 July 2020). In July, President Trump called Harvard University’s plan to hold online learning “ridiculous,” suggesting that “they ought to be ashamed of themselves” (MassLive, 8 July 2020). Amidst new COVID-19 clusters at several universities, some universities this week announced delays or cancellation of in-person classes (Washington Post, 19 August 2020). Many of the concerns about reopening universities stem from worries over house parties, bars, fraternities, and dorms, where maskless students may fail to maintain social distancing (New York Times, 17 August 2020). These fears have been exacerbated with recent photos of maskless congregations at college parties (CBS News, 17 August 2020). According to the World Health Organization, “people in their 20s, 30s and 40s are increasingly driving” the spread of the coronavirus (WHO, 18 August 2020).

In the midst of the COVID-19 pandemic, there have been calls across the country for widening access to vote-by-mail beyond absentee ballots alone. At the same time, the Trump administration, backed by many in the Republican party, has aggressively pushed a “false argument” that mail-in voting is prone to corruption (New York Times, 3 August 2020). The president has used the debunked claim to attack the vote-by-mail process as a whole, with his campaign even suing the state of New Jersey after the governor issued an executive order to provide all voters with mail-in ballots (The Hill, 19 August 2020). The administration has also taken steps to degrade the services offered by the USPS more broadly. Dramatic cost-cutting measures, implemented by Louis DeJoy, the new Postmaster General appointed by Trump, would make it near impossible for the USPS to accommodate a flood of mail-in ballots in November (CNN, 10 August 2020). The USPS had already been facing disruption in activity in recent weeks due to strains associated with the pandemic in addition to unfulfilled funding support from Congress (Vox, 7 August 2020). Over the weekend, DeJoy found himself “at the center of public anger over fears that Trump is interfering with the November election by crippling the Postal Service” as demonstrations spiked (Washington Post, 17 August 2020). In response, DeJoy announced earlier this week that “the [USPS] will suspend any policy or operational changes until after the presidential election” (NBC News, 18 August 2020).