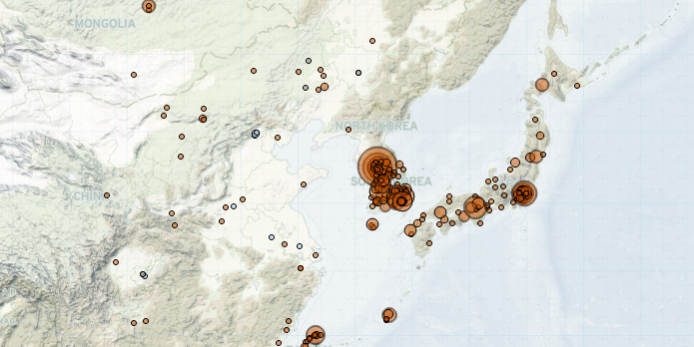 Last week in East Asia, a major riot broke out in Hong Kong after thousands of people demonstrated against the one-year postponement of the planned Legislative Council election. Other key developments in the region include: a decrease in protests in Inner Mongolia province, China opposing the new education policy, which replaces school instruction in Mongolian with Mandarin Chinese, and protests in Mongolia and Japan over the same policy. In South Korea, ousted teachers protested for reinstatement, and other demonstrations took place related to tensions between the government and Christian groups over the cause of the second wave of coronavirus.

In Hong Kong, after weeks of largely non-violent resistance, a major violent demonstration broke out on 6 September. Thousands of people took to the streets to demonstrate against the one-year postponement of the Legislative Council election, originally slated to be held on that day (BBC, 6 September 2020). The election has since been postponed by a whole year to 5 September 2021. The government has stated that the postponement was necessary due to the ongoing third wave of the health pandemic. This claim was refuted by the pro-democracy camp, which had hoped to capitalize on deep-seated anti-government sentiments to secure a majority in the Legislative Council. During the demonstration, clashes with the police were reported, with police firing pepper balls and making a total of 289 arrests (HKFP, 6 September 2020). On the same day, the Vice Chairman of a pro-democracy political party was arrested, which sparked further smaller-scale protests by pro-democracy supporters during the week.

Meanwhile, in Inner Mongolia province, China, reports of demonstration activity decreased dramatically last week after a surge the week prior over a new education policy that replaces Mongolian for Chinese as the language of instruction for certain subjects. The decline comes as authorities continue to crack down on the movement. In addition to mass arrests and the imposition of curfews, there have also been reports of authorities responding with other punitive measures — local governments have issued notices instructing people to send their children back to school or risk losing their jobs and social benefits (SMHRIC, 7 September 2020). However, while demonstrations have decreased, class boycotts have persisted across the province (SMHRIC, 9 September 2020). In Mongolia, Mongolians from China living in Ulaanbaatar and local civil society organizations gathered at the UN office in the capital, demanding the UN to clarify its position regarding the rights of ethnic Mongolians living in the Inner Mongolia region of China (Shuud.mn, 7 September 2020). Around 100 women gathered at the Monument for the Victims of Political Repression in Ulaanbaatar to call for Mongolians to maintain and protect the traditional Mongolian language (Ikon.mn, 10 September 2020; News.mn, 10 September 2020). In Japan, in solidarity, around 100 people, including ethnic Mongolians, including those originating from China, protested in front of the Chinese Consulate in Osaka against the Chinese government’s new policy to replace Mongolian with Chinese in schools (Kyodo News, 12 September 2020).

In South Korea, following a recent court decision reinstating the union’s legitimacy, the Korean Teachers and Education Workers’ Union (KTU) organized a number of protests in Seoul, Jeonju, Chuncheon, Busan, and Jeju, on behalf of laid off teachers. The KTU, one of the largest and most active unions representing education workers in South Korea, was outlawed in 2013 when authorities decided that dismissed teachers could not be registered as union members. The move was regarded by some as violating labor rights and suppressing the organization, due to the union’s progressive stance (The Korea Times, 4 September 2020). On 3 September, the Supreme Court decided that it was illegal to outlaw the KTU for having laid-off teachers as its members. After the union regained its legal status, the KTU protests, which have been ongoing since 2013, shifted their focus to the reinstatement of dismissed teachers back to their workplaces.

Also in South Korea, with authorities trying to bring the total number of confirmed coronavirus cases below 100 per day (The Korea Herald, 10 September 2020), conservative and Protestant Christian groups gathered again last week to criticize the government’s coronavirus quarantine measures as being politically motivated to suppress their activities. They claimed that the National Liberation Day of Korea rally, which is regarded by some as responsible for the second wave of COVID-19 infections, had nothing to do with the spread of the coronavirus. They announced plans to hold massive rallies on upcoming public holidays: Hangul Day (3 October) and National Foundation Day (9 October). Separately, delivery workers staged a nationwide protest, urging the government to support delivery workers who have been overworked during the coronavirus pandemic.