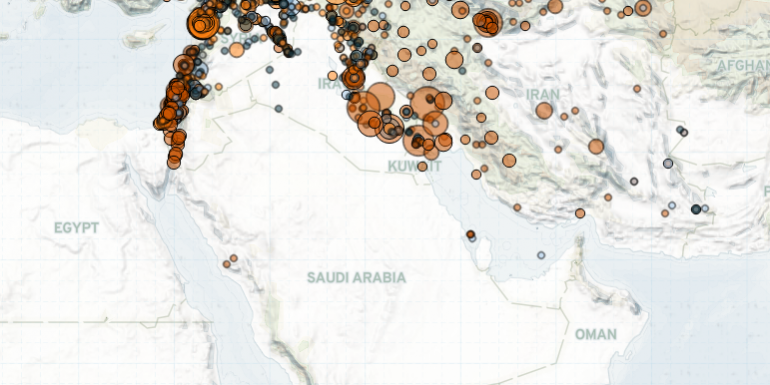 Last week in the Middle East, the Saudi-led coalition conducted airstrikes in Yemen for the first time since July, as Houthi forces continued their operations in Marib governorate. Bahrain announced its willingness to follow in the footsteps of the United Arab Emirates (UAE) in normalizing relations with Israel; both are set to sign historic agreements with Israel next week.  In Lebanon, a political crisis is brewing as the new Prime Minister designate struggles to form a government.

In Yemen, Houthi forces continued to conduct offensive operations in Marib governorate, reportedly taking control over the administrative center of Rahabah district and beyond, and advancing north of Medghal district (YP Agency, 10 September 2020). In weeks prior, the Houthis took control over the administrative centers of Mahliyah and Medghal districts as they continued their push towards Marib City from Medghal and Sirwah to the west, Rahabah and Mahliyah to the south, and the Al Alam front to the north. Conversely, the gains of anti-Houthi forces were relatively modest and limited to the frontlines, notably in the area of Jabal Nudhud on the Al Alam front on the Al Jawf-Marib border. Additionally, Houthi and anti-Houthi forces clashed — without exchanges of territory — throughout Al Hodeidah governorate, in Qaatabah district in northwestern Ad Dali, in Mukayras and As Sawmaah in southern Al Bayda, and on the Lahij-Taizz border.

Clashes between forces loyal to the Southern Transitional Council (STC) and the internationally-recognized government continued in Abyan. On 10 September, pro-STC forces reportedly killed an officer and a soldier in an artillery attack at the Ash Shaykh Salim front (Aden al Ghad, 10 September 2020). After this incident, shelling attacks by both sides increased with multiple reports of such exchanges along frontlines to the north and east of Zinjibar, the capital of Abyan governorate, currently under control of STC forces. These exchanges come in the context of the STC’s decision to withdraw from the most recent iteration of the Riyadh Agreement, days before its implementation deadline (Reuters, 25 August 2020).

In Saudi Arabia, a flurry of drone and missile attacks were claimed by Houthi forces on Abha, Najran, and Riyadh. Three attacks on Abha were reported with contrasting claims of operational success by Houthi and Saudi spokespersons. After the attacks, on 10 September, Saudi forces claimed to have intercepted two drones targeting Najran and prevented attacks on Riyadh, while Houthi forces claimed to have carried out an attack with Samad-3 drones and a Zulfiqar ballistic missile on an “important target” in Riyadh (SPA, 10 September 2020; Reuters, 10 September 2020; Al Jazeera, 10 September 2020). In response, an aircraft from the Saudi-led coalition conducted airstrikes in Sanaa city for the first time since 1 July (Reuters, 11 September 2020).

Meanwhile, the UAE and Bahrain are set to sign historic normalization agreements with Israel on 15 September. In response, Palestinian factions led by Hamas and the Fatah Movement agreed on a unified leadership, with the aim of leading a resistance movement against the establishment of such ties, as it is in rejection of the Arab Peace Initiative (Al Jazeera, 15 September 2020). The Arab Peace Initiative of 2002 stipulates that normalization of relations with Israel would only take place if a large number of concessions were made by the Israelis, chief among them was the full withdrawal of Israel from occupied territories.

For the tenth consecutive week, demonstrations took place across Israel led by the Black Flag Movement. Protesters are demanding Prime Minister Benjamin Netanyahu’s immediate resignation due to his ongoing corruption case tackling bribery, fraud, and breach of trust, as well as his handling of the coronavirus outbreak. A three-week long nationwide lockdown will go into effect on 18 September in Israel, due to the increase in coronavirus cases (CBS News, 14 September 2020).

In Lebanon, a huge fire erupted at a warehouse storing aid in the Beirut Port area, at the site of the large blast that killed around 190 people on 4 August (Port Strategy, 14 September 2020). No injuries were reported, and the cause of the fire is not yet known (BBC, 11 September 2020). During French President Emmanuel Macron’s visit to Beirut, a month after the Beirut explosion, he reported that Lebanese politicians agreed to form a cabinet within the span of 15 days. Sunni Prime Minister Mustafa Adib was faced with objections from the Shiite and Christian parties after he attempted to forego the traditional consultations involved in the process of forming a new government (Reuters, 14 September 2020). It is currently unclear when Adib will succeed in the formation of a new cabinet.

On 11 September, Israeli airstrikes targeted the regime defense factories in Aleppo. While no casualties were reported, the scale of the damage so far remains unknown (Al-Monitor, 11 September 2020). In southern Syria, attacks and assassinations against regime forces and former opposition fighters continued, prompting the regime’s security to conduct limited search and arrest operations in Dar’a.

Elsewhere, attacks by the Islamic State (IS) and unidentified armed groups continued to target Syrian Democratic Forces (QSD) and regime and allied positions in eastern Syria. In Deir-ez-Zor, IS ambushed a Quds Brigade convoy leading to intense clashes with several casualties.