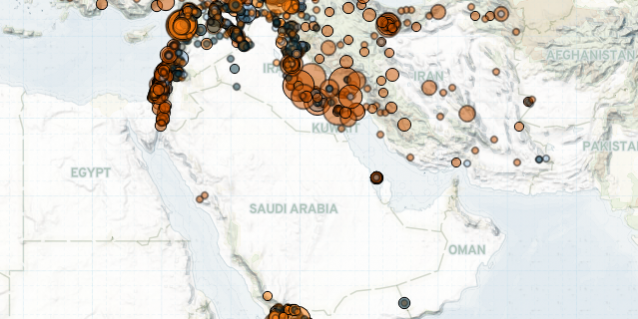 Last week in the Middle East, the United Arab Emirates (UAE) and Bahrain signed normalization agreements with Israel in Washington, DC, setting off a wave of protests in Bahrain, Palestine, and Iran. A new round of sanctions on Iran was announced by the United States (US). In Syria, a car bomb explosion in Afrin city resulted in civilian fatalities. Meanwhile, clashes in Abyan governorate between pro-Southern Transitional Council (STC) forces and forces of the internationally recognized government in Yemen declined to their lowest levels since May.

On 15 September, the UAE and Bahrain signed agreements at the White House in the US establishing full diplomatic relations with Israel (ABC News, 15 September 2020). These agreements include the opening of embassies and the start of direct flights between the three countries, in addition to new business investments and military cooperation. The signing of the agreements set off a wave of discontent across Bahrain, Iran, and Palestine, where protests broke out denouncing the move.

Also in Palestine, on the day of the signing of the agreements, armed factions in the Gaza Strip fired long-range rockets over southern Israeli cities. The rockets were intercepted by the Iron Dome defense system, but left 13 Israelis injured (Al Monitor, 21 September 2020). Israel retaliated by launching a number of airstrikes on Hamas positions, marking the possible end of the Qatar-brokered ceasefire, which has been in place since 31 August.

Tensions are also heightened once again between Iran and the US, with the announcement of a new round of sanctions by the US that will be enforced unilaterally in defiance of nearly all UN members, including American allies in Europe (France 24, 22 September 2020).  Meanwhile, in Iran in Western Azerbaijan province, the Kurdish militant group Zagros Eagles uncharacteristically claimed an attack that left one member of the Iranian Revolutionary Guard Corps (IRGC) dead. This is the first attack claimed by the group since 2017.

For the third consecutive week, Israeli warplanes launched several airstrikes in Syria, this time targeting pro-Iran militia forces in al-Bukamal city of Deir-ez-Zor, killing 10 militiamen. In southern Syria, clashes broke out between the 5th Assault Corps and unidentified tribal gunmen in Sur in Dar’a, resulting in several fatalities and further exacerbating the security situation in the province.

Furthermore, a global coalition drone strike targeted and killed a foreign Hurras Al Deen commander in Idleb city on 14 September (The Defense Post, 15 September 2020). Coalition aircraft carried out two airstrikes in Iraq in the Shay Valley and Al Rutba, killing three Islamic State (IS) militants (Basnews, 14 September 2020; Al Maloomah, 14 September 2020). Since July, attacks by unidentified groups against contracted convoys of the global coalition have been on the rise, with September set to have the highest number of such events. These attacks are presumably carried out by Iranian-backed militias as retaliation for the killing of General Qassim Soleimani back in January.

In Yemen, Houthi forces continued to conduct offensive operations in Marib governorate, with armed clashes reported in Rahabah, Abdiyah, Harib, Jabal Murad, and Al Jubah districts in southern Marib and Sirwah and Mahliyah districts in northern Marib. Houthi forces in southern Marib continue to make advancements, albeit at a slower rate than weeks prior when Houthis took a number of districts in Marib and Al Bayda. Currently, Houthi forces are focused on advancing into Jabal Murad on the southern approach to Marib City, with the majority of fighting occurring at the confluence of Rahabah, Harib, Jabal Murad, and Al Jubah districts (ISW News, 17 September 2020).  Anti-Houthi forces made minor gains in Abdiyah district in southern Marib, Sirwah district in northern Marib, and in the Al Jawf desert, east of Al Hazm city. In Taizz, clashes occurred without changes in territory on the frontlines to the west of Taizz city and on the Lahij-Taizz border near Ar Rahidah city. Finally, clashes continued in Al Hodeidah and Ad Dali governorates.

Notably, the clashes between pro-STC forces and forces of the internationally-recognized government declined significantly in Abyan governorate. Only two instances of artillery exchanges were reported with no claims of fatalities. This lack of activity represents the calmest period on the front since fighting broke out on 11 May 2020, including during a failed Saudi-monitored ceasefire in late July (Middle East Monitor, 27 July 2020).

In Saudi Arabia, Houthi forces claimed to have attacked Abha International Airport on 15 September, while Saudi forces claimed to have intercepted a drone over Khamis Mushayt on 17 September (Reuters, 15 September 2020; US News, 17 September 2020). Additionally, on 19 September, Houthi forces reportedly shelled a Saudi village on the border with Yemen in Jizan governorate, injuring five civilians (Reuters, 20 September 2020). The reported attacks in Saudi Arabia came days after aircraft from the Saudi-led coalition conducted airstrikes in Sanaa city (Reuters, 13 September 2020). The Saudi-led coalition has increasingly targeted Sanaa during the last two weeks following a period of no airstrikes reported since 1 July 2020.