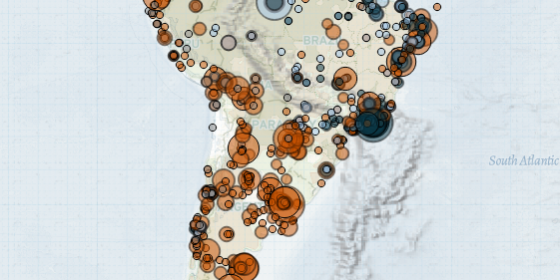 Last week in South America, demonstrations over coronavirus-related issues continued across the region. Meanwhile, social and political unrest was reported in Colombia, Bolivia, and Venezuela. In Brazil, armed clashes continued to take place between armed groups and state forces.

The number of pandemic-related demonstrations slightly decreased last week across the region in comparison to the previous week. Throughout several cities in Guyana, nurses carried out protests to demand acknowledgement for their work during the pandemic. While they are working longer shifts, they feel that they are not being paid fairly for the number of hours being worked and the increased risk of exposure to the virus. Meanwhile, in Chile, health workers and police forces clashed during a demonstration in Providencia, in which demonstrators demanded better work conditions. The police used water cannons and tear gas against the demonstrators who blocked an avenue. Furthermore, in Iquique, business owners took to the streets to request flexibility in imposed restrictions on their commercial establishments and other economic sectors classified as non-essential. In Argentina, health workers joined a nationwide protest to demand an increase in salaries and to reject precarious working conditions. Additionally, tourism workers called for government measures to reactivate the tourism sector. Similar protests took place in Paraguay, where merchants called for the reopening of borders; closed borders have led to an economic crisis in cities along the border. Following the demonstration, the government agreed to reopen the borders with time restrictions.

In Bolivia, tensions continue to rise in the lead up to a contested presidential election, expected to take place on 18 October. In Sucre and Santa Cruz de la Sierra cities, citizens rejected the campaign of the Movement Towards Socialism (MAS) and its presidential candidate, Luis Acre. In Sucre, locals and merchants threw fruit peels and water at Acre and his followers as they campaigned. In Santa Cruz de la Sierra, rioters threw rocks at the campaigners, injuring some MAS supporters.

In Colombia, hundreds of people took to the streets in a nationwide protest against police brutality, after a man was killed by state forces in Bogotá on 9 September for not following quarantine measures. Several social organizations joined the nationwide protests to reject the lack of response to the ongoing killings taking place in several departments, including in Cauca, Nariño, Valle del Cauca, Antioquia, and Norte de Santander. In less than 24 hours, six people were killed in violent attacks against civilians in the Cauca department while four others were killed in the Nariño department, including a female indigenous leader. (El Tiempo, 21 September 2020). For more, see this recent piece in the LSE Latin America and Caribbean blog: ¿Cómo entender la ola de asesinatos de líderes sociales en Colombia durante la pandemia?.

In Venezuela, the number of protest events increased significantly over the past week. Citizens took to the streets to demand basic services such as potable water, electricity, domestic gas, and the distribution of fuel. In Yaracuy, residents ignored lockdown measures and carried out protests for several days. State forces suppressed the demonstrations, injuring and arresting several protesters.

Meanwhile, in Paraguay, protests were held to demand the release of former Vice President Oscar Denis, member of the Authentic Radical Liberal Party (PLRA), who had been kidnapped by members of the Paraguayan People’s Army (EPP) rebel group earlier this month. The kidnapping was fueled by the killing of the daughters of two EPP leaders by state forces during a raid on an EPP settlement in Yby Yau on 2 September. The EPP, the main insurgent group active in Paraguay, is a left-oriented armed organization that aims to reclaim expropriated land now belonging to businessmen. The group conducts sporadic attacks on farms along the border with Brazil, but it has also been involved in extortion and kidnappings targeting political authorities in recent years.

Over the last week in Brazil, residents of several cities protested against poor infrastructure and public services. In addition, protests against discrimination, racism, and police brutality took place in the cities of Porto Alegre, Salvador, and Macapá. In Porto Alegre, a Black man was killed by a military officer who mistook his mobile phone for a firearm. In Macapá, a Black teacher was beaten up and called racial slurs during a police patrol. The teacher’s son recorded the beating and released the footage on social media.

Meanwhile, gold miners staged a six-day protest in the cities of Redenção and Ourilândia do Norte in Pará state. The miners seek the legalization of mining in the indigenous lands that are under special environmental protection. They also are calling for the suspension of any operation to be carried out by the Brazilian Institute of the Environment (IBAMA). The IBAMA had authorized the seizure and destruction of any illegal mining equipment found in the aforementioned regions. A hearing was scheduled with government authorities to deliberate over the issue. Brazil faces continued criticism from the international community regarding the lack of effective measures to protect indigenous lands and reserved areas, and the failure to combat fires in the Amazon Basin and in the Brazilian Wetlands.

In the North and Central zones of Rio de Janeiro city, clashes continue to take place over territorial disputes between the Red Command (CV) and the Pure Third Command (TCP), with at least six fatalities reported last week. 41 people were killed in clashes between armed groups and state forces, as well as in clashes between different armed groups, while 42 people were killed in targeted attacks.

Julia Lins Franciotti is the South America Assistant Research Manager at ACLED. She holds an LL.M. degree in Public International Law from Universiteit Leiden. Her research interests include urban violence and organized crime in Latin America and data-driven policymaking for violence prevention and economic development.
1 October 2020
Share
TweetShare on Twitter Share on FacebookShare on Facebook Share on LinkedInShare on LinkedIn