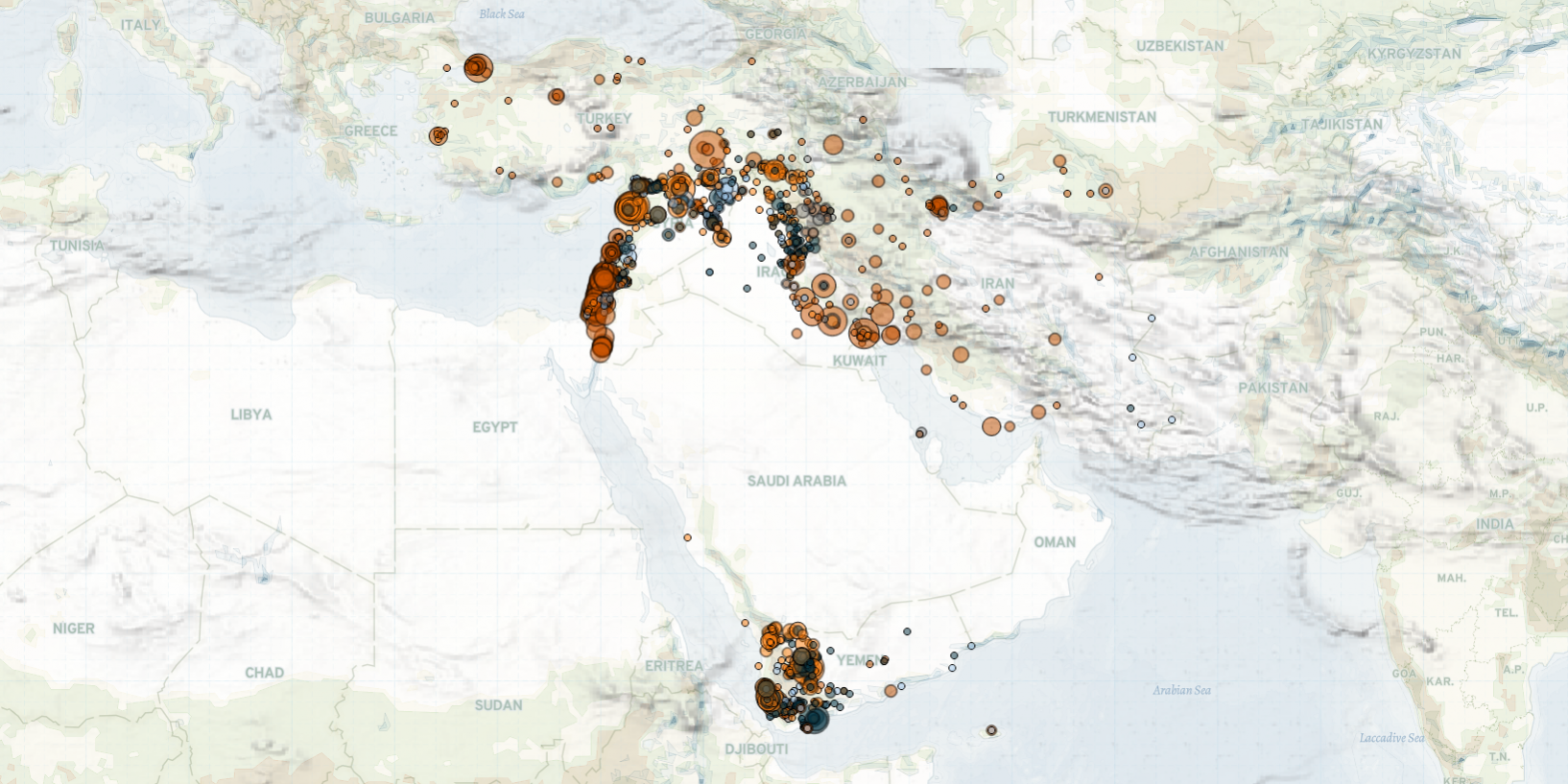 Last week in the Middle East, clashes continued between pro-Hadi and pro-Southern Transitional Council (STC) forces in Yemen despite an agreement to de-escalate tensions in Abyan. Yemen was also the scene of several demonstrations over the last week, sparked by the physical and economic insecurity caused by the war. In Syria, more Turkish forces withdrew from military observation outposts in the northwest. Meanwhile in Iraq, violent demonstrations erupted in the Kurdistan Region over several months of wage arrears, resulting in more than 10 reported fatalities. Elsewhere, in Iran, strict security measures were reported in three Kurdish cities in an apparent search operation over the recent assassination of nuclear scientist Mohsen Fakhrizadeh, while the government executed a dissident journalist. Finally, Israel and Morocco announced the normalization of relations.

In Yemen, pro-Hadi military and pro-STC forces began implementing an agreement to de-escalate tensions in Abyan, which entailed both forces redeploying a few brigades to other fighting fronts under the supervision of Saudi military observers (Arab News, 12 December 2020). Despite the agreement, the two groups clashed throughout the week, exchanging artillery fire on the At Tariyah and Ash Shaykh Salim fronts.

Further, civilians in Yemen took to the streets last week to protest rising physical and economic insecurity as a result of the war. The assassination of the dean of the Ad Dali College of Education on 5 December touched off a series of protests, culminating in thousands of people demonstrating in Ad Dali on Thursday (Aden al Ghad, 10 December 2020). They demanded that security forces bring the perpetrators of the dean’s assasination to justice and improve the security situation (Aden al Ghad, 10 December 2020). Additionally, thousands of people protested in Taizz, At Turbah, and An Nashmah against the deterioration of economic conditions, including the collapse of the Yemeni riyal (Al Masdar, 12 December 2020).

In Saudi Arabia, the Saudi-led coalition intercepted two drones rigged with explosives that were targeting Saudi residential areas. The coalition also destroyed two Houthi bomb-laden boats in the Red Sea. While Houthi forces regularly use these asymmetric weapons to threaten Saudi interests, their use has declined since mid-November when Houthi forces launched nine drones and five boats rigged with explosives at Saudi facilities and assets between 9-13 November.

In northwest Syria, Turkish forces evacuated three additional military outposts from Idleb’s Sarman and Aleppo’s Al Rashdeen and Khan Tuman areas. Withdrawing from all outposts surrounded by regime forces during previous military advancements is part of the March 2020 ceasefire agreement between Turkey and Russia. Meanwhile, Turkey continued to double-down on its military presence along the M4 highway, having brought more reinforcements from Turkey and deployed new troops along the highway and near Ariha. In eastern Syria, locals fled areas in Ar-Raqqa’s Ein Issa due to the surge in indirect fire attacks by Turkish forces and local opposition forces. Fears of a new round of Turkish-led military operations against areas held by Syrian Democratic Forces (QSD) also encouraged displacements. Elsewhere, attacks by unidentified gunmen continued to target members of the regime forces and former opposition rebels in Dar’a province.

Week-long demonstrations broke out in the Kurdistan Region of Iraq (KRI) last week over the Kurdistan Region Government’s failure to pay government employees’ salaries (The Washington Post, 12 December 2020). So far in 2020, only four months’ wages have been paid. Demonstrations were mainly reported in Sulaymaniyah province and, in the vast majority of cases, turned violent. Clashes broke out between rioters and security forces, including Asayish and Peshmerga, as rioters attempted to storm government buildings. Thousands of demonstrators managed to set fire to numerous offices owned by the five major political parties in KRI, including the Kurdistan Democratic Party (KDP), Patriotic Union of Kurdistan (PUK), Kurdistan Islamic Group (KIG), and Gorran Party (Change Movement). Over 10 fatalities from both sides were recorded during the clashes. As KRI’s fiscal deficit is showing no signs of immediate recovery, further unrest can be expected in the coming weeks. Elsewhere in Iraq, an unknown explosion took place near Baghdad International Airport at an area where a military base housing US forces is located. The source of the explosion, which resulted in no reported casualties, remains unclear.

Meanwhile in Iran, tight security measures were imposed in several Kurdish cities along Iran’s western broder. Reports suggest that this was in connection with an ongoing search operation to arrest a number of suspects allegedly involved in the assassination of top nuclear scientist Mohsen Fakhrizadeh (Shafaq, 15 December 2020). Telephone and internet lines were reportedly cut off in the city of Baneh, while dozens of homes were raided and at least 20 people were arrested (Hengaw, 10 December 2020). Also, in Marivan and Saqqez, temporary checkpoints were set up to control the entry and exit to the cities (Iran Wire, 11 December 2020).

In another development, Iran last week executed dissident journalist Ruhollah Zam. The Iranian government accused Zam of using a social media channel to incite the deadly 2017-2018 anti-government unrest (BBC, 12 December 2020). Zam, who had lived in France since 2011, was lured into traveling to Iraq in October 2019 under mysterious circumstances, at which point he was arrested and transferred to Iran for trial (CNN, 12 December 2020). Iran is now facing a global outcry over the execution at a time when the election of Joe Biden as president in the United States had raised expectations of a diplomatic opening between Iran and the West. The Europe-Iran Business Forum — a major three-day virtual conference funded by the EU — which was scheduled to start with keynote remarks by Iranian Foreign Minister Zarif on 14 December, was cancelled by the organizer due to Zam’s hanging (Wall Street Journal, 13 December 2020).

Finally, Israel and Morocco agreed to normalize relations, in a deal brokered by the United States. In return, US President Donald Trump announced on Twitter that the US will recognize Morocco’s claim over Western Sahara (Economist, 13 December 2020). Following the United Arab Emirates, Bahrain, and Sudan, Morocco is the fourth Arab state to establish diplomatic relations with Israel in recent months. Criticizing the agreement, Palestinian officials suggest the deal comes at the expense of an independent Palestinian state, urging other Muslim countries to withhold ties with Israel until a two-state solution is reached (NPR, 10 December 2020).