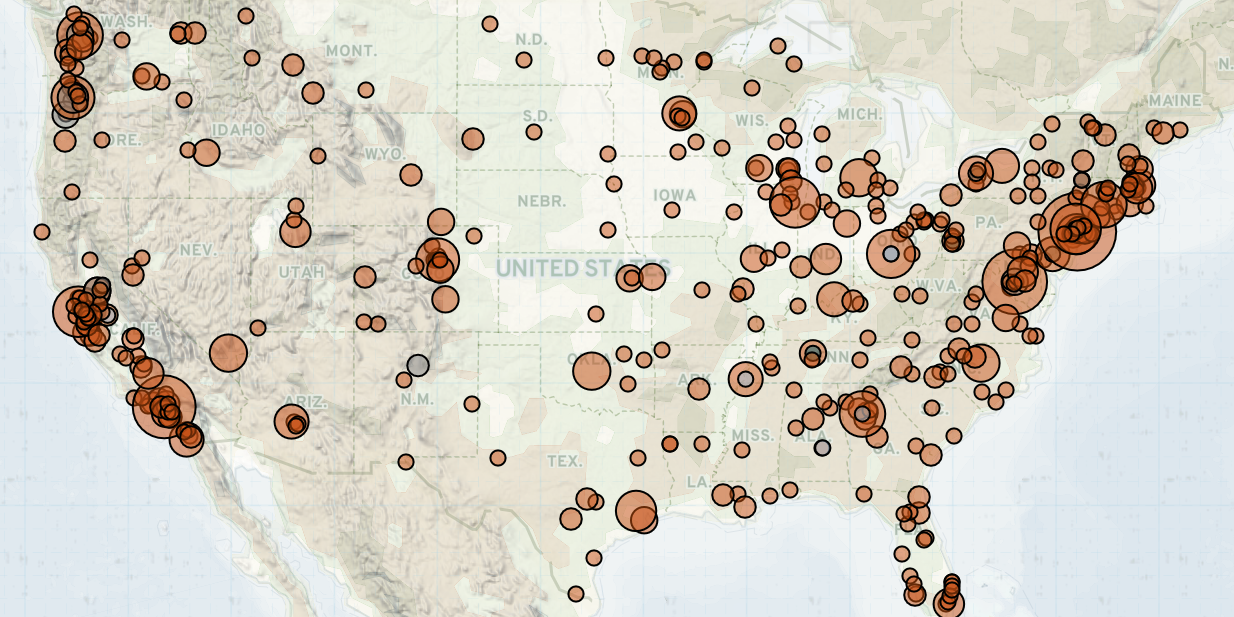 While demonstrations in the United States continued on a downward trend through the end of 2020, they began to resurge in the first week of 2021. With President Donald Trump’s continued refusal to accept the election results (The Hill, 6 January 2021), ‘Stop the Steal’ rallies continued across the country, culminating in significant unrest in Washington, DC on 6 January 2021. Meanwhile, demonstrations associated with the Black Lives Matter (BLM) movement continued as well, albeit at levels well below those recorded in the summer of 2020. Additionally, demonstrations against government-imposed COVID-19 restrictions continued, though at slightly diminished levels compared to weeks prior.

‘Stop the Steal’ rallies held by Trump supporters account for approximately one-fifth of all demonstrations recorded in the US during the last four weeks. The rallies came as the president continued to deny electoral defeat and make unfounded claims about mass voter fraud (Al Jazeera, 9 January 2021). Reports revealed that President Trump made two calls to Georgia elections officials in December and January urging them to overturn the election results, an act that could constitute obstruction of justice (Washington Post, 9 January 2021).

The president’s unfounded allegations culminated in violent unrest on 6 January 2021, when Congress convened to certify the Electoral College votes for the 2020 election and officially confirm President-elect Joe Biden’s victory. At the time of the certification, President Trump hosted a ‘Save America March’ in front of the White House, calling for his supporters to march to the Capitol building (New York Times, 10 January 2021). Rudy Giuliani, President Trump’s personal lawyer, called for ‘trial by combat’ in a speech at the event, further inciting the crowd (ABC News, 11 January 2021).

Several militias and far-right groups were present at the demonstration, including Sons of Liberty New Jersey, Groypers, Oath Keepers, Proud Boys, III%ers, and NSC-13. An IED was found on the Capitol grounds and a number of other explosives were found in various locations nearby (NBC News, 6 January 2021).

In the early afternoon, hundreds of rioters stormed and occupied the US Capitol building, disrupting the certification process and prompting the evacuation of lawmakers from the Congressional chambers. Capitol Police were unprepared, outnumbered, and overwhelmed by the demonstrators, despite numerous warnings about possible unrest (Washington Post, 7 January 2021). Some reports indicate Capitol Police were intentionally undermanned in an attempt to avoid a show of force that could lead to escalation, as happened in Portland, Oregon over the summer (Wall Street Journal, 7 January 2021). When rioters pressed toward the Capitol, many officers retreated or made little effort to physically block them from entering the building.

The police response to the Capitol unrest was a stark contrast to law enforcement’s approach to peaceful protests against racial injustice during the summer (NPR, 11 January 2021). ACLED data indicate that this disparity fits a pattern: authorities are more than twice as likely to break up a left-wing demonstration than a right-wing demonstration (FiveThirtyEight, 7 January 2021), and approximately three times more likely to use force (Guardian, 14 January 2021). Heavily armed federal law enforcement agencies and the National Guard — which were a constant presence during the summer’s demonstrations — were not visible at the Capitol. Initially, 340 National Guard members were deployed by the Department of Defense on the condition that they would not be armed and would play a supporting role, such as traffic management (Washington Post, 7 January 2021). Around 1,100 National Guard troops were later activated by Vice President Mike Pence and deployed around the city, after the rioters had breached the Capitol building (Washington Post, 7 January 2021).

Some of the rioters inside the Capitol building used socks filled with metal objects to strike officers, causing multiple injuries. Others pepper-sprayed and hit authorities with metal pipes and chemical irritants. While most rioters did not bring guns due to repeated public announcements about strict laws against openly carrying weapons in Washington, DC, numerous people were still arrested for gun violations (Fox News, 5 January 2021). Some rioters carried zip-tie handcuffs with them, ostensibly to detain targeted members of Congress they deemed “traitors” and Vice President Mike Pence, the latter for not trying to block the certification process (Forbes, 10 January 2021a; 10 January 2021b). Rioters assaulted and threatened at least six members of the media and destroyed media equipment outside. One journalist was hit with rubber bullets by rioters, while others were briefly detained by police as they covered the event. Two rioters and one police officer were killed as a direct result of the violence, while two other rioters reportedly succumbed to medical conditions (New York Times, 11 January 2021). More than 50 police officers were injured and more than 90 people were arrested.

Members of Congress reconvened that night and certified the electoral results in the early morning on 7 January. About half the Republican senators that previously announced plans to object to certification reneged on those plans and voted to certify the results following the riot, condemning the day’s violence (New York Times, 7 January 2021). President Trump acknowledged that he would not serve a second term and promised a peaceful transition in a pre-recorded video, yet he refused to concede and continued to assert unfounded claims of electoral fraud (CNN, 7 January 2021). Various social media outlets including Twitter, Facebook, and Instagram banned the president’s accounts for fear of inciting violence (Washington Post, 11 January 2021). Twitter later permanently suspended Trump’s personal account after it decided his tweets on 8 January violated its policy against the glorification of violence. In addition, other online platforms, such as Twitch and Shopify, shut down shops and accounts related to Trump (Forbes, 8 January 2021). FBI reports have since warned of armed protests and possible attempts to storm state capitol buildings throughout the country in the days surrounding President-elect Biden’s inauguration on 20 January (Associated Press, 11 January 2021). On 13 January, the House of Representatives voted to impeach President Trump over his role in inciting the unrest. Ten Republican lawmakers also voted in favor of the impeachment.

Nearly 40% of all demonstrations over the last four weeks have been related to the coronavirus pandemic. The numbers of new cases and deaths remain high, with an average of over 215,000 new cases and over 2,600 deaths reported daily across the country during the four-week period. These numbers surged to over 240,000 new cases and over 2,900 daily deaths in the first week of 2021 (Washington Post, 8 January 2021). In an effort to control the pandemic, state governments have continued to uphold public health restrictions including mask mandates and restrictions on businesses (New York Times, 12 January 2021). Approximately 20% of all demonstrations during the past four weeks have focused on overturning these pandemic-related restrictions.

Since healthcare workers administered the first COVID-19 vaccines on 14 December (Wall Street Journal, 14 December 2020), 2.8% of the US population has received at least the first dose of the vaccine, as of 12 January (Washington Post, 12 January 2021). In the meantime, anti-vaccine demonstrations have been held in several states, including in New York, Washington, and Florida. While Congress debated over the coronavirus relief package (Business Insider, 28 December 2020), the private residences of House Speaker Nancy Pelosi and Senate Majority Leader Mitch McConnell were vandalized with spray-paint on 31 December 2020 and 2 January 2021, respectively, in calls for financial support during the pandemic (Politico, 3 January 2021).

Demonstrations associated with the BLM movement have continued over the past four weeks, though at diminished levels compared to the months following the killing of George Floyd. Approximately 12% of all demonstrations reported during this period were related to the BLM movement. Three incidents of police violence against African Americans in Ohio, California, and Tennessee resulted in multiple days of demonstrations in support of the BLM movement and against police brutality. In Columbus, Ohio, a police officer shot and killed an unarmed 47-year-old Black man, Andre Hill, on 22 December (NPR, 28 December 2020). In Modesto, California, police fatally shot an unarmed Black man, Trevor Seever, on 29 December (FOX40, 5 January 2021). In Memphis, Tennessee, police officers repeatedly punched a Black man while he was restrained on 4 January (WREG, 4 January 2021).

In Nashville, Tennessee, a suicide bombing was reported on Christmas Day (New York Times, 26 December 2020). A man detonated a bomb inside a recreational vehicle parked in downtown Nashville following the broadcast of a recorded countdown, giving a 15-minute warning before the explosion. He was killed in the blast, which caused widespread communications outages after affecting an AT&T transmission building. Three people were injured and at least 41 buildings, many of them historical, were damaged by the blast. The man previously posted anti-5G conspiracy theories on his social media channels (Newsweek, 27 December 2020), though the motive for the bombing is still under investigation.