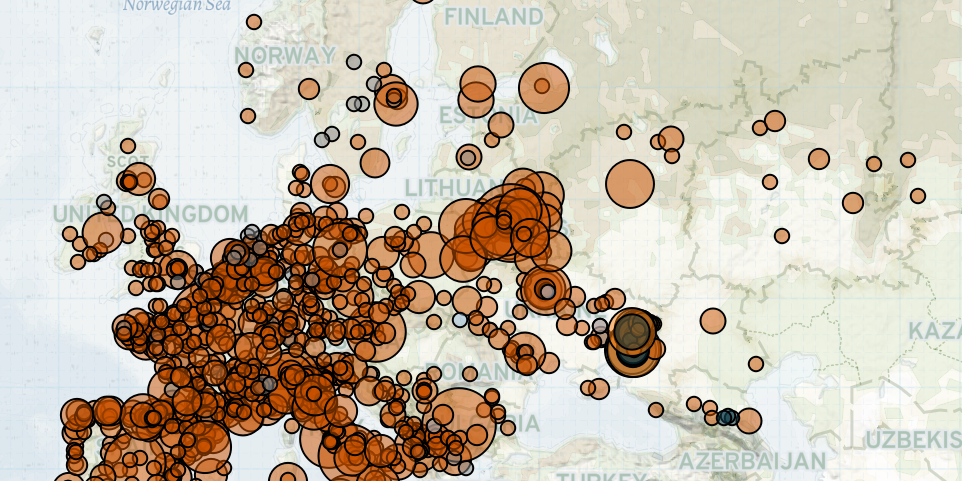 In Belarus, demonstrations against the regime of Alexander Lukashenko continued through the holidays, though with slightly fewer events reported. Demonstrations took place across the country, with larger demonstrations on 20 and 27 December resulting in over 150 arrests (RFE/RL, 20 December 2020). Lukashenko promised a referendum on some, as yet unspecified, changes to the constitution. Some speculate that this might include his resignation as president and assumption of a role elsewhere in the Belarusian state that allows him to retain de facto control (ISANS, 28 December 2020; Al Jazeera, 31 December 2020). These reforms are unlikely to placate demonstrators, who continue to insist on Lukashenko’s resignation from government and the prosecution of regime officials responsible for grievous abuse of Belarusians, including the beating and torture of demonstrators (HRW, 15 September 2020).

In the Republic of Ireland, demonstrations were held in West Dublin and the city centers of Dublin, Galway, and Waterford in response to the killing of George Nkencho. Nkencho was a young Black man, killed by police outside of his home in West Dublin on 31 December (BBC, 31 December 2020). Investigations into the incident are ongoing. The violence marks an escalation of existing prejudice towards the Black community in Ireland. The incident comes following a resurgence of the Black Lives Matter movement and demands of change in police brutality targeting Black populations around the world.

In Spain, demonstrations increased before the holidays in the Basque region against the retrial of the 2011 Bateragune court case. Five members of the Abertzale Left were sentenced to ten years in prison (later reduced to six and a half) for allegedly trying to “rebuild” the illegal Batasuna Independentist Alliance (El Diario Vasco, 22 December 2020). The alliance had been ordered to disband by the Basque Homeland and Freedom (ETA) under which it previously operated. This was intended to maintain the ceasefire and disarmament process begun in 2010. The case was later dismissed in 2018 by the European Court of Human Rights for violations of Article 6.1 of the European Convention on Human Rights: “applicants’ fears of a lack of impartiality on the part of the judges who convicted them” (ElMundo, 19 December 2020). Reopening the case is likely to have an impact on Basque nationalist sentiment within the region.

In Russia, the frequency of demonstrations decreased over the new year holiday period. However, the Khabarovsk demonstrations in support of former Governor Sergei Furgal, who his supporters contend was arrested for political reasons, continued (Znak, 2 January 2021; ACLED, 30 September 2020). Investigative group Bellingcat and Russian opposition figure Alexei Navalny released an investigation outlining evidence supporting the claim that Navalny was poisoned by Russian security services. This triggered further demonstrations demanding a formal investigation (Kommersant, 22 December 2020). These demonstrations are likely to continue if Navalny returns to Russia on 17 January, as he has indicated his intention to do. He will likely face arrest by Russian authorities on politically motivated charges of fraud.

In Montenegro, the parliament voted to amend the controversial Religious Freedom Law. The amendment ensures that the Serbian Orthodox Church would not face seizure of property, while the Montenegrin Orthodox Church would still be vulnerable to such seizures. The amendment caused thousands to demonstrate ahead of the vote, claiming the government is more loyal to Serbia than Montenegro (RFE/RL, 29 December 2020). The Montenegrin president, whose party first voted in the law but has since lost the majority in parliament, has refused to sign the amendment, returning it to the assembly (RFE/RL, 02 January 2020). The political disputes between the president and parliament over this bill will likely continue for months, leading to more demonstrations.

In Moldova, reformist President Maia Sandu was inaugurated. Sandu appointed Foreign Minister Aureliu Ciocoi as acting Prime Minister (RFE/RL, 1 January 2021). With a cabinet dominated by opposition parties, at least until snap parliamentary elections, Moldova faces increasing challenges in the economy and public health sectors. This is so even as Romania and the EU declare readiness to help and provide coronavirus vaccines (RFE/RL, 30 December 2020).

In Hungary there were no demonstrations reported, despite constitutional changes. On 15 December, the Hungarian Parliament adopted constitutional amendments to the electoral cod  e and basic law. They increased the number of candidates a party needs to have run in an election to be considered legitimate, and made a two-thirds majority a requirement for any appointment changes to public-functioning private organizations (24.hu, 15 December 2020). This was done both to target so-called fake parties, while making it harder for the opposition to challenge the ruling party, and to make it harder to disrupt current government appointments, even after a possible change in government. The changes made to the basic laws that are meant to target vulnerable LGBT groups and their adoption rights will now also be harder to reverse.

There were demonstrations related to the coronavirus pandemic across several countries in the region over the past month, including in Greece, Germany, the United Kingdom, Lithuania, Estonia, and Italy, amongst others. In the United Kingdom, anti-lockdown and anti-vaccine demonstrations continued weekly in multiple cities against restrictions put in place by the government, with some turning violent (Nottingham Post, 21 December 2020). In Greece, demonstrations against the government’s handling of the pandemic continued into the new year, some turning violent. They particularly focused on expressing anger over the 2021 state budget, approved on 15 December, demanding more spending for health and education instead of increased spending for the police and military (To Vima, 15 December 2020). Meanwhile, in Germany, demonstrations, including many organized by the far right Querdenken movement, took place before Christmas against coronavirus protection measures imposed by the government. Concurrently, pandemic-related restrictions resulted in a decrease in demonstration activity in Lithuania, Estonia, and markedly in Italy.

In the Donbas region in Ukraine, fighting between Ukrainian government forces and Russian-led separatists remained at very low levels between 13 December 2020 and 8 January 2021. There were 124 armed clashes, 193 shelling events, and two fatalities reported.

Separately, a Greek and a Turkish Coast Guard vessel collided near the islets of Imia following an incident involving Greek fishermen operating in waters claimed by both states; it is unclear which vessel was at fault. The collision comes amidst heightened tensions between Turkey and Greece in the Eastern Mediterranean (Ekathimerini, 8 January 2021).