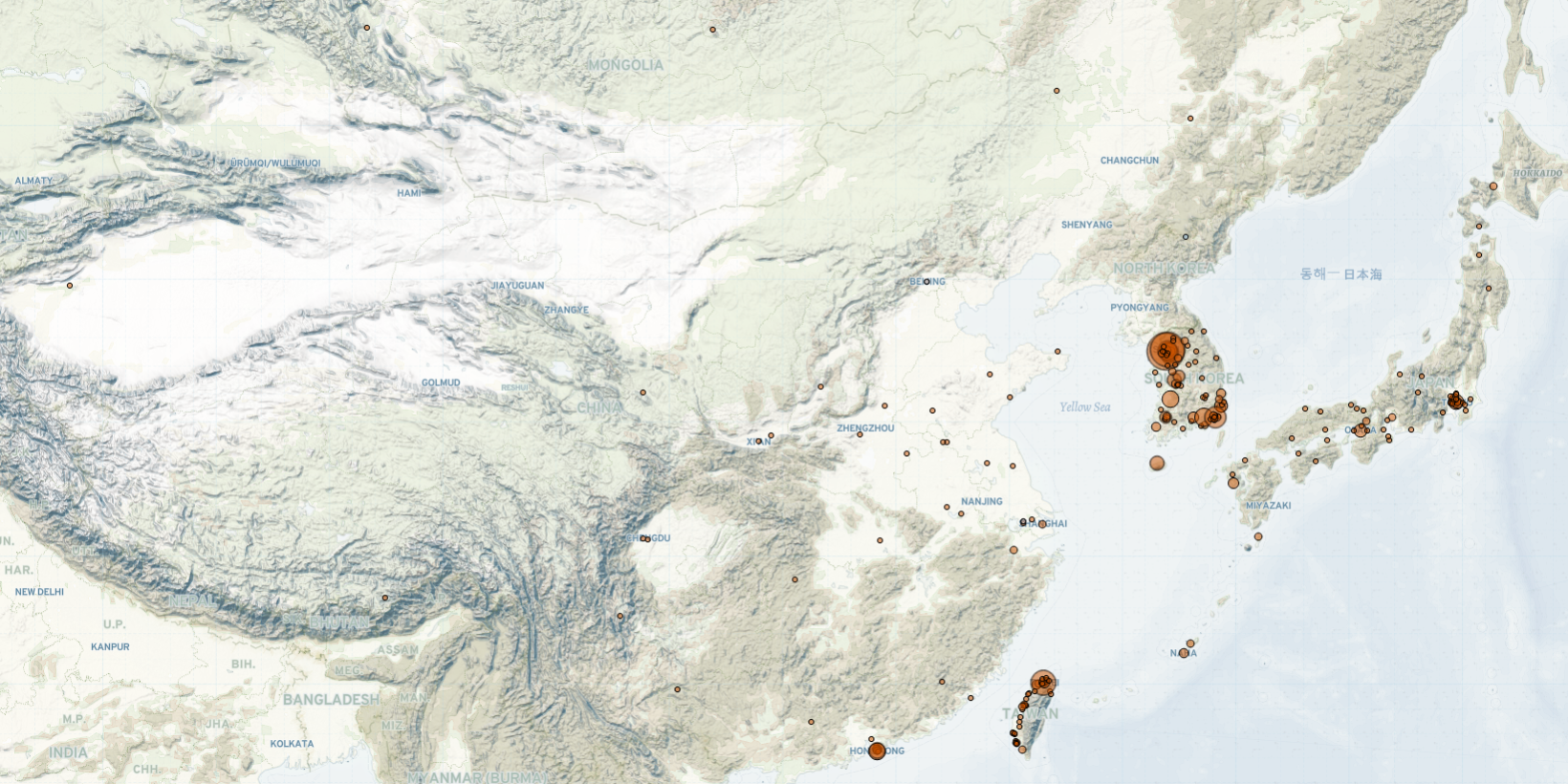 Last week in East Asia, police in Hong Kong continued to crack down on those linked to the pro-democracy movement. Eleven people were arrested on suspicion of helping 12 Hong Kong fugitives flee to Taiwan last August. North Korea displayed previously unseen weapons during a military parade which marked the end of the Workers’ Party Congress. In South Korea, the final ruling in former President Park Geun-hye’s trial sparked a series of protests, both supporting and opposing the sentence. Also in South Korea, victims of an alleged toxic humidifier sterilizer held protests to oppose a court’s decision not to indict the former CEOs of the manufacturing company. Also notable in South Korea, activists and citizens took to the streets over the death of a 16-month-old child who was allegedly abused and murdered by his adoptive parents. In Taiwan, Taoyuan residents voted to remove a Democratic Progressive Party city councilor following a campaign led by the opposition party, Kuomintang (KMT). The move was seen as a tit-for-tat response to last year’s recall vote of a KMT mayor. Lastly, in Mongolia, retailers demonstrated in front of the Government Palace for the second time in recent months, demanding the Prime Minister take concrete steps to support small businesses amid a strict lockdown.

In Hong Kong, following a sweeping crackdown on pro-democracy activists and politicians on 6 January, further arrests were reported last week. The police’s National Security Department — a unit established shortly after the passing of the National Security Law last June — arrested 11 people on 14 January on suspicion of providing funds to 12 Hong Kong fugitives who attempted to escape to Taiwan. Among those arrested were a veteran human rights lawyer, district councilors, and pro-democracy campaigners, all of whom face a maximum penalty of ten years if found guilty (SCMP, 14 January 2021). The 12 fugitives were first intercepted and held in custody by mainland authorities while fleeing for Taiwan in August 2020. Their court cases were closely watched by activists and prompted demonstrations in Hong Kong, Taiwan, and the United States, demanding the return of the 12 detainees to Hong Kong. Ten of the 12 individuals were jailed for up to three years by a Chinese court in December 2020 for illegal border crossing (HKFP, 30 December 2020).

Last week, North Korea ended the 8th Congress of the Workers’ Party with a massive military parade. There were several notable developments on this occasion. Kim Jong Un admitted to failing to restart the economy amid international sanctions, the pandemic, and other natural disasters. He also committed to bolstering the nuclear and missile program, which further fuels increasing tensions with North Korea’s neighbors and the US. Moreover, he was appointed “general secretary” of the ruling Workers’ Party, in a symbolic move to further strengthen his power. He also appointed a close associate as secretary of the central committee of the ruling Workers’ Party, a position viewed by experts as the third most powerful role in North Korea (KBS, 15 January 2021).

Previously unseen weapons were displayed during a military parade organized to celebrate the end of the Congress. Significantly, a new type of submarine-launched ballistic missile (SLBM) has caused worry to neighboring countries and the US, as SLBMs have been proven to be harder to detect (The Guardian, 15 January 2021). This development is seen by many as a show of force to demonstrate North Korean nuclear weapon capabilities, especially as it comes just days before the inauguration of US President-elect Joe Biden. However, the actual capabilities of the new weapons displayed are still not clear as they have not yet been tested.

In South Korea, the Supreme Court upheld former President Park Geun-hye’s 20-year prison sentence (CNN, 14 January 2021). She was found guilty on multiple counts, including abuse of power, extortion, and bribery. This was the final ruling in a trial triggered by a political scandal that led to the famous candlelight protests and the subsequent impeachment of the former president in 2017. Despite the final ruling, Park’s supporters, including members of conservative groups, staged a protest in front of the Supreme Court, opposing the court’s ruling. Furthermore, the granting of pardons to two former presidents, who are currently in jail for corruption charges, sparked a new controversy. The floor leader of the ruling Democratic Party spoke out in favor of the decision in order to promote national unity between conservatives and progressives, but encountered fierce objection from progressive supporters (Yonhap News Agency, 14 January 2021). This led to further protests, as some progressive groups expressed their strong opposition, while conservative groups urged the president to grant pardons.

Also in South Korea, the former CEOs of SK Chemical and Aekyung Industrial have been accused of manufacturing and selling a humidifier cleaner that contained harmful chemical substances. The court found them not guilty for deaths attributed to the product. Victims who had fallen ill after using the product, along with bereaved family members, protested the ruling (Yonhap News Agency, 12 January 2021). The Seoul Central District Prosecutor’s Office announced an appeal of the ruling, with support from the victims (The Kyunghyang Shinmun, 12 January 2021). Since 2011, in response to increased reporting of deaths and diseases allegedly caused by humidifier disinfectants, victims and civic groups have staged a series of protests to demand an apology from manufacturers and compensation for the victims.

Lastly, in South Korea, protesters condemned the adoptive parents who allegedly abused a 16-month-old child, resulting in her death (Korea JoongAng Daily, 13 January 2021). Child welfare activists and citizens held rallies to demand that the adoptive parents be indicted and punished for murder. More than 230,000 people signed a public petition to the Blue House, asking for this penalty. Further protests for the improvement of the post-adoption care system and against child abuse are expected in response to this case, with the next trial planned to be held on 17 February (JoongAng Ilbo, 15 January 2021).

In Taiwan, the KMT launched a nationwide signature drive at hundreds of locations to collect signatures in support of a referendum to overturn the government’s decision to allow imports of US pork containing ractopamine. The KMT accused the ruling Democratic Progressive Party (DPP) of ignoring food safety concerns and the economic livelihoods of domestic hog farmers. The KMT party aims to gather at least 500,000 signatures and plans for its referendum question to be put to a vote (Taipei Times, 10 January 2021).

Meanwhile, demonstrations and press conferences were held last week, which resulted in a successful recall campaign against a DPP city councilor last Saturday (New Bloom, 18 January 2021). While the city councilor was previously embroiled in numerous controversies for his outspoken remarks, the move was widely regarded by political pundits as a tit-for-tat strategy led by the KMT (Taiwan News, 16 January 2021; Focus Taiwan, 16 January 2021). This vote followed a recent recall election in August 2020 to remove a KMT mayor, a campaign that received strong support from DPP politicians. The successive recall votes have called into question the use of recalls to target politicians, resulting in further political polarization in the country (New Bloom, 18 January 2021).

Finally, in Mongolia, around 200 to 300 retailers demonstrated outside the Government Palace in Ulaanbaatar, demanding the Prime Minister take concrete measures to save small businesses amid a strict lockdown (Udriin Sonin, 13 January 2021). Retailers asked authorities to temporarily freeze loans and to provide financial support to their businesses. Operations of some small businesses have been restricted since November due to a surge in locally transmitted cases of coronavirus in the country. A demonstration with the same demands was organized by retailers in early December during a strict coronavirus lockdown in the capital (News.mn, 2 December 2020). Currently, two organizers of the December demonstration are under court proceedings over the breach of the Administrative Offence Act.