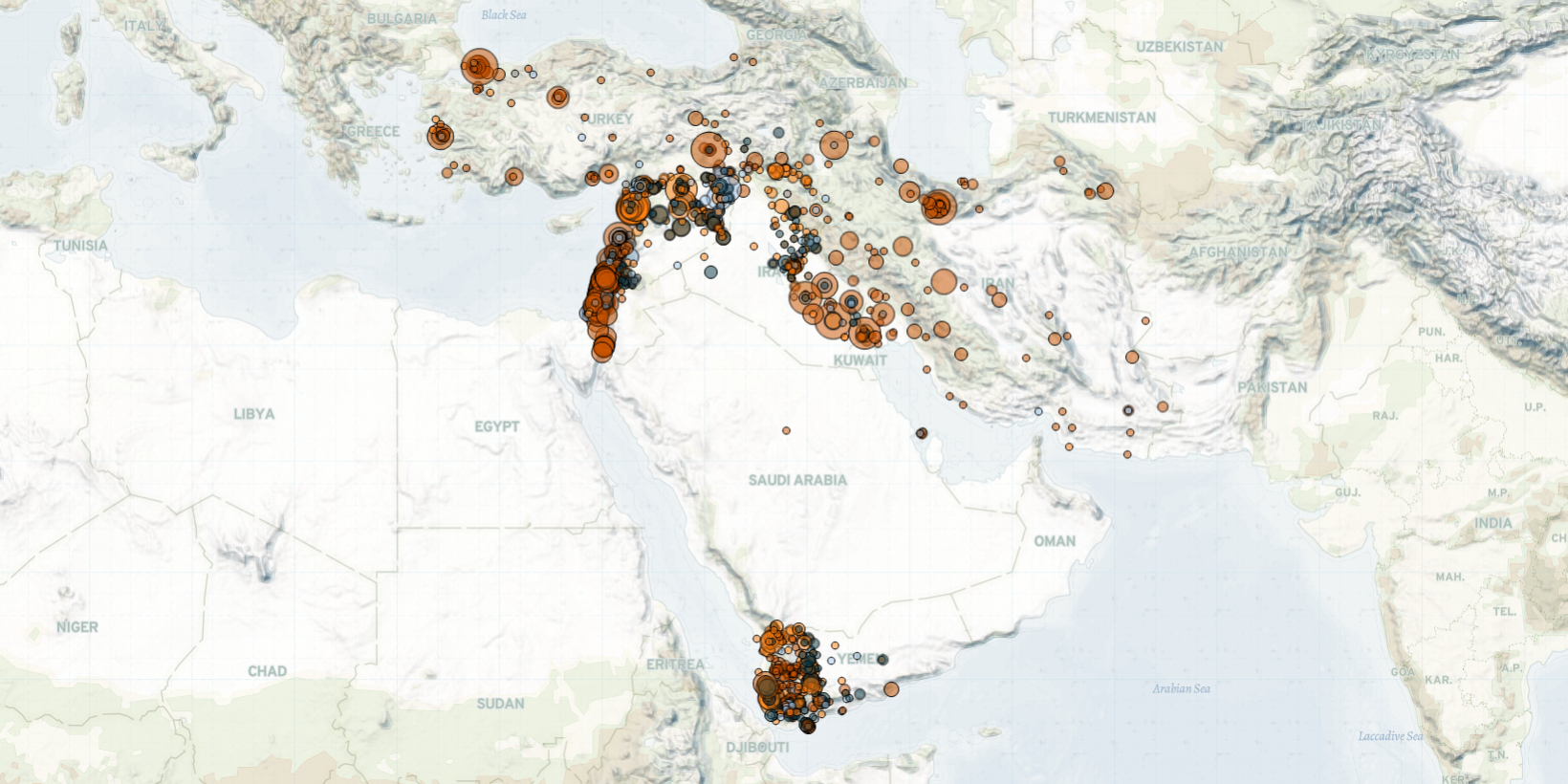 Last week in the Middle East, pro-Hadi forces made territorial gains in Al Jawf and Sadah governorates in Yemen. Meanwhile, the US administration announced the removal of Houthis from its list of terrorist organizations, and the end of US support for the Saudi-led coalition in Yemen. Elsewhere, regime forces in Syria killed at least eight members of the Turkistan Islamic Party (TIP) in Hama, while at least seven civilians were killed in an explosion in Azaz. In Iraq, the Islamic State (IS) governor of Southern Iraq was killed in a Global Coalition airstrike, whereas IS fighters killed five members of the Popular Mobilization Forces (PMF). Anti-government demonstrations were staged in several Middle Eastern countries over the last week, including in Saudi Arabia, Iraq, Lebanon, and Israel. Lastely, a prominent critic of Hezbollah was assassinated in Lebanon.

In Yemen, the Hodeidah, Sadah, and Marib governorates saw the most violence between 30 January and 5 February. The Saudi-led coalition also conducted a number of airstrikes in Marib’s Sirwah district and in the Sadah’s Baqim, Al Daher, and Kitaf wa Al Boqee districts.

The administration of US President Joe Biden took steps last week to shift US involvement with the Saudi-led coalition’s military campaign in Yemen. The US State Department announced that they would remove the Houthis from the US list of foreign terrorist organizations, reversing the previous Trump administration’s decision (Washington Post, 6 February 2021). The Biden administration also announced that they would no longer support the Saudi-led coalition’s “offensive operations” in Yemen, though it is unclear exactly what that entails (Al Jazeera, 7 February 2021). The administration notes that this move would not impact US operations against Al Qaeda in the Arabian Peninsula (Reuters, 4 February 2021).

In Saudi Arabia, there were reports of police breaking up a sizable demonstration on 2 February in Buraydah. Hundreds of people had been protesting against declining livelihoods and increased economic insecurity (Ahlul Bayt, 2 February 2021). Since the onset of the COVID-19 crisis, the Saudi economy has suffered due to its reliance on the oil sector. Global economic lockdowns and travel have negatively impacted oil demand, resulting in a collapse in oil prices. The official unemployment rate for Saudi citizens is nearly 15%, an over 3% increase since the onset of the crisis (Arab News, 23 January 2021).

Pro-Houthi forces also continue their efforts to threaten the physical security of Saudi assets. On 30 January, a Katyusha rocket landed near Al Baydah on the border with Yemen, though there were no reports of injuries or damage (Al Masdar, 31 January 2021). Saudi-led coalition forces also intercepted a Houthi drone in Yemeni airspace that was headed toward Saudi airspace (Saudi Press Agency, 30 January 2021).

In Syria, unidentified gunmen attacked a Turkish observation outpost near Abu Zubayr in Idleb’s Ariha area, killing a high-ranking Turkish officer and wounding a soldier. In Hama, regime forces targeted a TIP bus on the Kherbet Elnaqus front, killing eight TIP members and wounding several others. Meanwhile, Russian warplanes carried out several airstrikes in the greater Idleb area. One Russian sortie targeted a rebel position near Armanaz, though no fatalities were reported. In Aleppo’s Azaz, a vehicle-borne improvised explosive device (VBIED) went off near the cultural center in the city on 31 January, killing seven civilians and wounding over 30 others (Deutsche Welle, 31 January 2021). In Azaz district, shelling barrages exchanged between opposition rebels and People’s Protection Units (YPG) intensified last week, though no major clashes took place. In eastern Syria, two IEDs went off in opposition-controlled Ras Al Ain in Al Hasakeh, wounding a man. No fatalities were reported. Meanwhile, Syrian Democratic Forces (QSD) launched a security operation jointly with the Global Coalition in southern Al Hasakeh, namely in Shadadah, Hole, and Markada sub-districts. During the operations, dozens of people were detained for alleged connections with IS sleeper cells. In southern Syria, Israeli warplanes launched airstrikes in Rural Damascus and Quneitra, including on Damascus international airport on 3 February. Those in Quneitra targeted the regime’s 90th Armored Brigade, as well as pro-Iran militia forces positions. No fatalities were reported in the attacks. Meanwhile, regime forces arrested over 300 civilians in several cities in Rural Damascus in early February for conscription purposes.

In Iraq, the Global Coalition conducted an airstrike on 2 February, killing the IS governor of Southern Iraq Abu Hassan Al Gharibawi, also known as Jabar Ali Fayyadin Zaidan. According to Iraqi security, Abu Hassan was one of the masterminds behind the twin suicide bombing in Baghdad on 28 January. This is the highest ranking IS fatality since Abu Yasser Al Issawi’s death last week. The strike also killed the IS commander who transported the twin bombers to Baghdad by car (Al Shafaaq News, 2 February 2021).

Meanwhile, Iraqi riot police injured three rioters with live bullets during clashes between police and dozens of rioters in Al Haboubi square in Nassriya city on 5 February. Riot police attempted to push the rioters from the Hadarat and Zeitun Bridge to the square; rioters threw stones at police. They demand the release of a recently detained activist, and that security forces be held accountable for violence against demonstrators (Al Shafaaq News, 5 February 2021). In Diyala province, IS fighters ambushed the PMF 1st Brigade, including Badr Organization and Liwa Al Imam Muhammad Al Jawad in Ayn Al Samak, killing five fighters. The PMF unit was conducting a sweep operation in the area, which had started three days prior. Afterwards, multiple PMF brigades were deployed to the area and the joint force launched an anti-ISIS operation on 3 February, resulting in skirmishes and the destruction of some IS hideouts in the area (Xinhua, 2 February 2021).

In Israel, demonstrations erupted over the killing of an Arab citizen during a police shoot-out. The victim — a 22-year-old nursing student — was killed after he left his home to see what was going on and got caught in the crossfire between the police and suspected criminals. Demonstrators have been criticizing Israeli authorities for inaction, blaming the police for its failure to fight against the increasing rate of crime in Israel’s Arab community. Activists and experts suggest that the surge in crime in recent years is linked to the systemic and ongoing discrimination by the Israeli government of its Arab citizens, and a lack of social and economic opportunities for the Arab population (Jerusalem Post, 9 February 2020).

In Lebanon, anti-government demonstrations continued last week, although fewer events were recorded compared to the week prior. In Tripoli — the epicenter of unrest in recent weeks, triggered by strict coronavirus lockdown measures — demonstrations remained largely peaceful, with the exception of violent clashes between a group of demonstrators and security forces on 31 January. On the same day, the Lebanese military announced that it had arrested 17 people in connection with vandalism in Tripoli, including the torching of the city’s municipality on 29 January (The961, 1 February 2020). Several demonstrations were held during the week across the country to demand the release of the demonstrators, including a 17-year-old who they claim to have been wrongly accused.

In another development in Lebanon, Lokman Slim — a prominent Shiite journalist, political analyst, publisher, and activist — was killed by multiple gunshots in southern Lebanon on 4 February. Slim was an outspoken critic of the Shiite armed group Hezbollah, suggesting in a TV interview last month that Syria and its ally Hezbollah had a role in Beirut’s port explosion (Reuters, 4 February 2020). Assassinations have been rare in Lebanon in recent years, but Slim’s killing has raised fears of a new period of political killings (New York Times, 4 February 2020). Authorities are investigating the killing, but few of Lebanon’s political killings have ever been solved in the past.