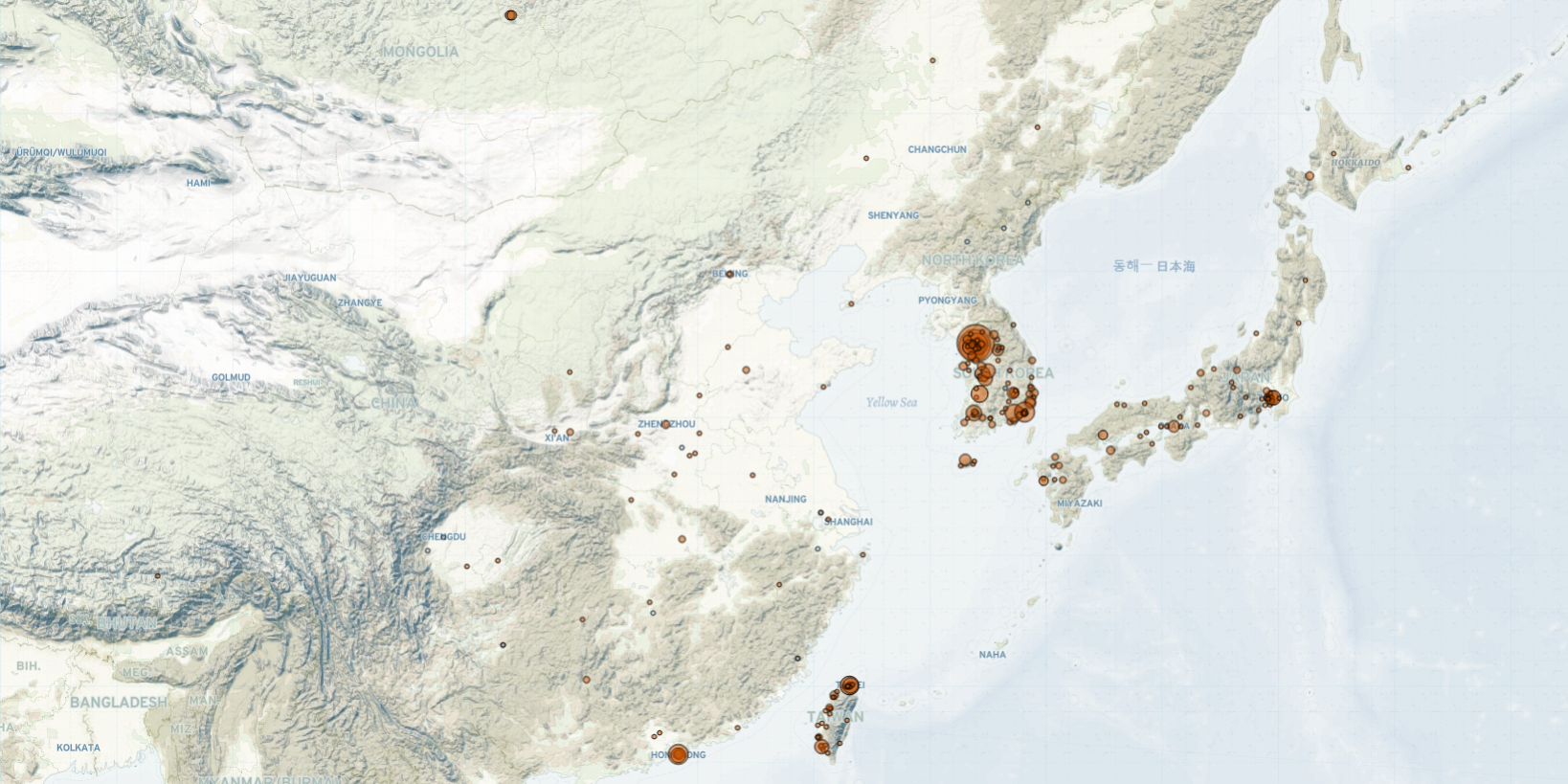 Demonstrations against the military coup in Myanmar were held across East Asia last week, in South Korea, Japan, Taiwan, and Hong Kong. Protesters, including Burmese nationals living abroad, showed solidarity with the people of Myanmar and urged for the immediate release of Aung San Suu Kyi. In North Korea, despite stricter measures to prevent the spread of COVID-19, two defection attempts, which resulted in multiple casualties, were reported last week. In Japan, the head of the Tokyo Olympics organizing committee resigned following multiple demonstrations and public outrage over sexist comments. In Taiwan, residents voted against the recall of a Kaohsiung city councilor. Lastly, in South Korea, protests over city development plans were reported in Busan ahead of the April mayoral election.

Protests opposing the military coup in Myanmar were reported last week in South Korea, Japan, Taiwan, and Hong Kong. In South Korea, Burmese nationals, mostly students and migrant workers, joined by Korean protesters, held rallies across major cities to criticize the military coup in Myanmar (The Korea Times, 11 February 2021; YNA, 7 February 2021). They asked Myanmar’s military rulers to restore democracy in the country and called for the immediate release of civilian government leaders, including State Counsellor Aung San Suu Kyi. As the military remains in power and government leaders are still detained, protests in support of the democratization movement in Myanmar are expected to continue in South Korea. While more demonstrations were reported in South Korea, the largest East Asian support rallies were reported in Japan last week. Demonstrations across multiple locations in the country attracted crowds in the hundreds, and in some cases thousands, throughout last week (TV Asahi, 7 February 2021; Mainichi Shimbun, 9 February 2021). Protesters renewed their call for the Japanese government to push for the release of de jure leader Aung San Suu Kyi and other leaders detained by military forces. In addition, news of the military’s suppression of protesters in Myanmar and blocking of the internet was also a source of unrest among Myanmar nationals in Japan last week (TV Asahi, 7 February 2021). In Taiwan, about 300 to 400 demonstrators from Taiwan’s Sino-Burmese community protested in Taipei’s “Little Myanmar” to express solidarity with the anti-coup movement (New Bloom, 6 February 2021). In Hong Kong, ten pro-democracy and labor groups, including the Civil Human Rights Front and the China Labour Bulletin, as well as prominent pro-democracy campaigner Nathan Law, co-signed a statement condemning the coup (HKFP, 10 February 2021).

In North Korea, despite strengthened government security measures to prevent border crossings amid the pandemic, more reports about defection attempts are emerging. It was reported last week that on 2 February, two North Koreans trying to defect were shot and killed by the border patrol stationed on the Sino-North Korean border in Chagang Province (Daily NK, 9 February 2021). Another source reported that on 31 January, a man was shot to death by border security while attempting to escape to China (Asia Press, 10 February 2021). In another attempt to prevent the spread of the pandemic, the North Korean authorities closed down almost all bridges on the Sino-North Korean border in North Hamgyong Province (Daily NK, 12 February 2021). This development further hampers the cross-border trade of goods.

In Japan, the monthly Flower Demo protests against sexual discrimination saw increased activity following sexist remarks from the head of the Tokyo Olympics organizing committee, who is a former prime minister, and an influential figure in the ruling Liberal Democratic Party (LDP). His comments, suggesting that women talk too much during meetings, garnered widespread criticism from Japan’s growing anti-sex discrimination movement. Olympic athletes, sponsors, diplomats, the media, and other citizens came forward to criticize the former prime minister’s comments. Protesters called for his immediate resignation from the Tokyo Olympics organizing committee. Despite initial resistance, he eventually resigned from the committee nine days following his initial remarks (Kyodo News, 11 February 2021). His resignation leaves the committee without leadership with just over five months from the planned opening ceremony. An official replacement has yet to be named. This development follows comments seen as derogatory towards women by a lawmaker of the ruling LDP, which provoked widespread criticism in October last year (Japan Times, 13 October 2021).

In Taiwan, a campaign, largely backed by Kuomintang (KMT), to remove an independent Kaohsiung city councilor was unsuccessful after residents voted on 6 February against the recall. Two days later, a new recall movement for a Taichung legislator gathered momentum as demonstrators staged a protest and submitted official documents to initiate the action (Liberty Times, 8 February 2021). The string of successive recall elections since the recall of a KMT mayor in June 2020 has called to question the risk posed by the current recall system to the electoral process in Taiwan. Critics argue that the current benchmark of the recall system makes it easier for politicians to be recalled than to be elected, highlighting its susceptibility in being employed by political parties as a political strategy (New Bloom, 6 February 2021). The ruling Democratic Progressive Party (DPP) has criticized the KMT for using recall elections as a tit-for-tat strategy for the most recent vote and the previous poll in January 2021. In response to calls for a review of existing recall laws, DPP officials stated that more time would be needed to reach a consensus on the issue (Taiwan News, 8 February 2021).

Lastly, in South Korea, the looming April municipal election in Busan sparked protests for and against different party pledges concerning city development. Lawmakers from the Democratic Party of Korea and civic groups support the parties’ promises to construct a new airport in Busan, while the Youth Emergency Action for Climate opposes the plan, citing environmental concerns (The Hankyoreh, 9 February 2021). Furthermore, the People Power Party announced a plan to build a sea tunnel connecting Busan and the Kyushu region of Japan (The Kyunghyang Shinmun, 4 February 2021). In response, a civic organization protested against the plan, describing it as a pro-Japanese project that would benefit Japan more than South Korea (News1, 10 February 2021). As the upcoming local poll in April will play an important role in next year’s presidential election, it is expected that more protests will be seen from supporters of parties and interest groups.