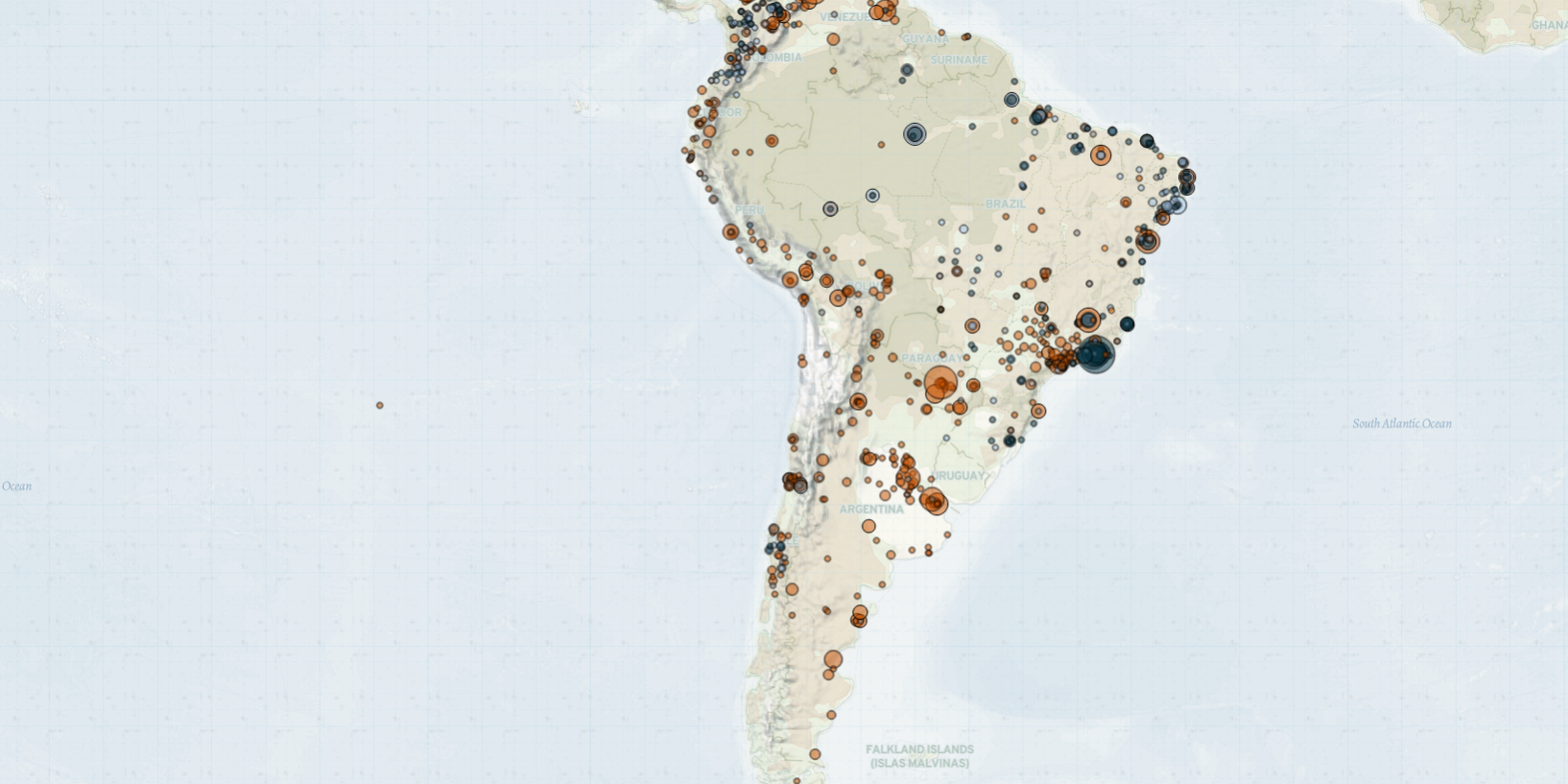 Last week in South America, Ecuador’s electoral body ordered a partial recount in presidential polls. In Chile, the police shooting of a street artist led to violent demonstrations. Tensions also increased in the country between Mapuche indigenous people and police forces, following the sentencing of a political prisoner. In Colombia, an increase in violent conflicts between armed groups led to more forced displacements. Protests against gender-based violence and against coronavirus lockdown measures took place in Argentina. Finally, in Brazil, armed clashes continued to take place between armed groups and state forces.

In Ecuador, presidential elections took place on 7 February. Ecuador’s electoral body ordered a partial recount in the disputed presidential polls after two candidates continue to vie for second place. Left-wing economist Andrés Arauz secured 32.6 percent of votes and a place in the second round, outpolling the conservative Guillermo Lasso, as well as the indigenous environmental activist Yaku Pérez (Al Jazeera, 14 February 2021). Lasso and Pérez found themselves in a virtual tie, with Perez securing 19.38 percent of the vote, while Lasso got 19.74 (Al Jazeera, 14 February 2021). Consequently, Pérez’s supporters held a protest outside the National Electoral Council, claiming that the vote counting was rigged (El Comercio, 12 February 2021). The United Nations urged transparency and a vote recount to determine which candidate will run against the frontrunner in the second round of the presidential elections, expected to  take place on 11 April 2021. On 12 February, Ecuador’s top electoral body confirmed it would conduct a partial recount of the votes (El País, 13 February 2021).

In Chile, the police killing of a street artist fueled social unrest and nationwide demonstrations. In the city of Panguipulli, Valdivia province, ten public buildings were burned to the ground by demonstrators, including the municipal government building, the post office, the civil registry, a local court, and a water management company. In the capital, Santiago, clashes were reported between police forces and demonstrators (Infogate, 9 February 2021).

Likewise, tensions between the Chilean government and Mapuche indigenous people increased in the Araucanía and Biobio regions. A Mapuche political prisoner, César Millanao, was sentenced to six years in prison by the Cañete Court for an arson attack carried out in 2016 (Biobio Chile, 15 February 2021). Tensions between the Mapuche people and the Chilean government have simmered for decades over questions of land reform and discrimination, intermittently erupting in unrest and violence (for more, see ACLED’s analysis piece: Understanding Indigenous Conflict in Chile).

Meanwhile, in Colombia, clashes between armed groups and state forces were reported in five different departments. In the Cauca department, state forces clashed with dissidents of the Revolutionary Armed Forces of Colombia (FARC). Nasa indigenous peoples were caught in the crossfire and injured (Infobae, 11 February 2021). Likewise, in the Chocó department, military and police forces killed the highest-ranking member of the Gulf Clan, Nelson Darío Hurtado Simanca, also known as Marihuano, during a military operation. Hurtado was responsible for the killing of several social leaders in Colombia, as well as for the killing of demobilized FARC combatants. Furthermore, Hurtado trafficked about six tons of cocaine hydrochloride to Europe and Central America each month (DW, 8 February 2021). Mass displacements have been reported as a result of the ongoing conflicts. Between January and February 2021, a total of at least 3,751 people have been displaced (Blu Radio, 12 February 2021). (For more, see ACLED’s report: Ten Conflict to Worry About in 2021.)

In Argentina, the opposition right-wing political coalition Together for Change (Juntos por el Cambio in Spanish) carried out protests in Buenos Aires, Santa Fé, Tucumán, Mendoza, and Chubut provinces to demand the return of in-person classes. Classes have been suspended for almost a year due to the coronavirus pandemic (La Nación, 9 February 2021). Meanwhile, in the city of Rojas, hundreds of citizens took to the streets to protest against femicide (La Nación, 9 February). Since 2015, Argentina has been the epicenter of massive street demonstrations under the slogan Not One (Woman) Less (Ni Una Menos in Spanish). The movement has placed the issue of gender-based violence on the public agenda and has called for the enactment of laws on the integral protection, punishment, and eradication of violence against women and girls (La Nación, 9 February).

Meanwhile, in Brazil, 82 shoot-outs between organized criminal groups and state forces were reported, resulting in a total of at least 55 deaths. In the north zone of the city of Rio de Janeiro, armed clashes continue to take place between the Red Command (CV) and the Pure Third Command (TCP) over territorial disputes over the Serrinha community, Madureira neighborhood (Globo Extra, 11 February 2021). Both the CV and TCP are the largest organized crime groups in the state of Rio de Janeiro. Territorial disputes are altering the geographical framework of Rio de Janeiro’s drug trafficking system and are affecting homicide rates in the region. The most prominent conflict zones are communities located next to ports, airports, and supply centers, or where rival groups exercise territorial control (Ponte Jornalismo, 29 August 2021).

Additionally, the head of the First Capital Command (PCC) of the city of Campo Grande, Mato Grosso do Sul state was killed by military police while they were carrying out his arrest warrant (Midiamax, 11 February 2021). The deceased was a member of the PCC’s so-called Crime Tribunal (Tribunal do Crime). The group’s crime tribunal is a way to exercise its power in a state-like manner in the areas where they have territorial control. These illegal forums were created to establish a collateral system of judgment and punishment applied to all those who harm the PCC’s business or fail to comply with the disciplinary rules dictated by the organization (VICE, 10 October 2016). The tribunals are an important element for their exercise of power, as they have their own statute of rules and a state-like judiciary system. Moreover, it takes a format that reproduces the judiciary model present in society: featuring the accused, the accuser, the possibility of defense, and the judging committee. Torture sessions and/or executions are common penalties (VICE, 10 October 2016). As of late, other organized criminal groups, such as the CV and TCP, have replicated their crime tribunal system and modus operandi (El País, 15 January 2017).