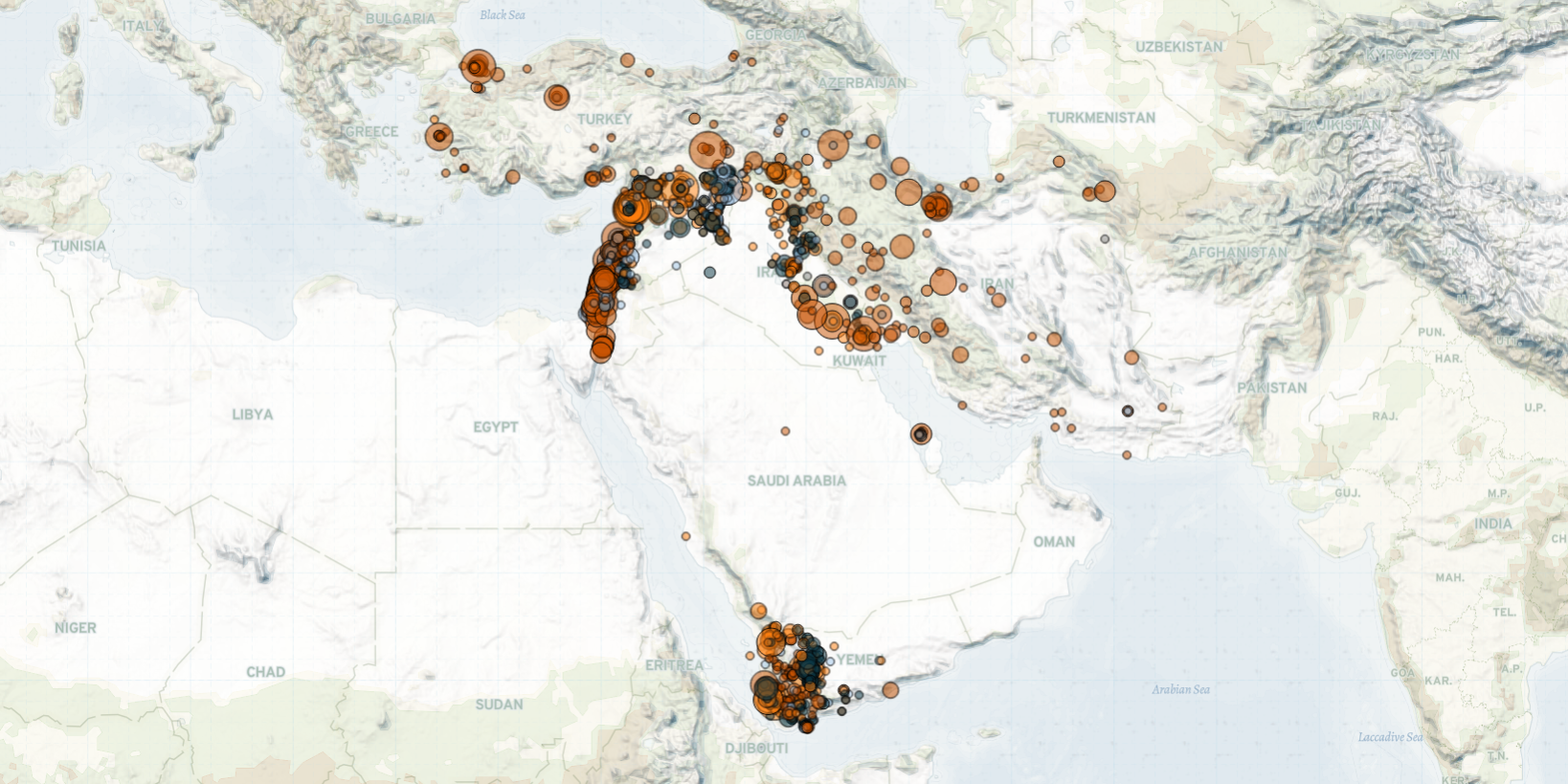 Last week in the Middle East, Houthis in Yemen captured Az Zurin in Marib’s Sirwah district, whereas pro-Hadi forces made gains in Al Jawf and Dali’s Qaatabah. Meanwhile, Houthis continued their drone attacks against airports in Saudi Arabia. In Syria, two IED explosions in Al Bab and Afrin city led to civilian casualties. Clashes between regime forces and the Islamic State (IS) continued in eastern Syria, killing at least 10 regime and pro-regime forces. In southern Syria, two Syrian shepherds were exchanged with an Isreali citizen in a prisoner swap mediated by Russia. Elsewhere, Shiite militant group Awliya Al Dam launched several rockets targeting US-led Coalition forces at the Erbil Airport, killing one Filipino contractor and wounding eight other people, including a US soldier. In Lebanon, demonstrations broke out following the removal of a judge leading the investigation into the Beirut port explosion. Lastly, the Turkish government carried out mass arrests of at least 718 people who were accused of supporting the Kurdistan Workers’ Party (PKK).

In Yemen, Houthi forces continued their military offensive in the Marib and Al Jawf governorates. In Marib, clashes between pro-Hadi and Houthi forces mainly occurred in the Sirwah district; however, a significant number also occurred in the Raghwan and Medghal districts throughout the week. The offensive also encompassed Al Jawf’s Al Hazm and Khabb wa ash Shaaf districts, and clashes also occurred in Ad Dali’s Qaatabah district after pro-Hadi forces opened up new fronts in an effort to relieve pressure on frontlines in Marib.

Frontlines in Marib and Al Jawf remained dynamic between 13 and 19 February. On 15 February, Houthi forces managed to capture Az Zur in Marib’s Sirwah district to advance towards the Marib Dam not far from Marib City (Moka News Agency, 16 February 2021). However, they did not manage to gain control of At Talaa Al Hamra and Jabal Balaq (Twitter, 24 February 2021). Pro-Hadi forces made gains in Ad Dali’s Qaatabah district (Mareb Press, 19 February 2021) and in Al Jawf (Khabar Agency, 18 February 2021).

In Syria, an IED attached to a van belonging to a local relief organization went off in Al Bab city in Aleppo, killing one occupant and wounding four other people, including the driver. In Afrin city, another IED was detonated in Al Mahmoudiyah neighborhood in the city center, which wounded a civilian. Elsewhere in the Aleppo countryside, Turkish forces shelled numerous areas held by the Syrian Democratic Forces (QSD), including in Azaz, Afrin, and Menbij districts. In Idleb, Russian warplanes carried out airstrikes on Hafasraja and the outskirts of the central prison in Idleb city. No casualties were reported.

In eastern Syria, clashes took place between QSD and regime forces near the river crossings between QSD- and regime-held areas in Deir-ez-Zor province. In the Homs desert area, clashes broke out between IS and regime and pro-regime militia forces on several occasions following attacks by the former. Regime and allied militia forces suffered at least 10 fatalities during the clashes.

In southern Syria, a prisoner swap took place between the Syrian regime and Israel with Russian mediation. Two Syrian shepherds were released by Israel in exchange for the regime releasing an Israeli citizen detained in Damascus. The shepherds were arrested when they accidently crossed onto the Israeli side, near the border strip in Quneitra (The New York Times, 18 February 2021). As part of the agreement, Israel will reportedly finance the supply of Russian-made COVID-19 vaccine to Damascus (Al Jazeera, 20 February 2021).

In Iraq, Shiite militant group Awliya Al Dam launched between 14 and 24 Katyusha rockets targeting US-led Coalition forces at the Erbil Airport on 15 February. Some rockets hit the airport while others overshot their target and landed in adjacent residential areas. The attack killed one Filipino contractor working for the Coalition and wounded eight others, including civilians in residential areas and one US soldier (New York Times, 15 February 2021). In light of the attack, NATO announced on 18 February the expansion of its security training mission in order to prevent the war-torn country from becoming a safe haven for “international terrorists” (NATO, 18 February 2021). The scope of the mission is set to increase from 500 personnel to around 4,000 and to involve more Iraqi security institutions (CNBC, 18 February 2021).

Furthermore, Iraq imposed a nationwide curfew to combat the spread of the coronavirus and its mutated strain. The curfew will be in place until at least 8 March, with the possibility of an extension if infection rates do not improve (Garda World, 15 February 2021). Despite the curfew, several protests occurred on 19 February. Protesters in Kut city denounced legal attempts aiming to secure the release of an Iraqi member of parliament sentenced on corruption charges (Al Mirbad, 19 February 2021). Dozens of protesters also gathered in the Al Haboubi square of Nassriya city and demanded to know the fate of an abducted activist (Al Sumaria TV, 19 February 2021). Meanwhile, hundreds of protesters in Nassriya demanded the opening of the Turkish hospital in light of the high rate of coronavirus infections in the county and the issuance of ration cards to poorer members of society (Al Mirbad, 19 February 2021).

In Lebanon, families of those who died in August 2020’s Beirut port explosion, together with their supporters, held several demonstrations to denounce the removal of a judge leading the investigation into the blast. In Beirut, demonstrators blocked the roads leading to the Palace of Justice with burning tires and dumpsters on two consecutive days. Roads were also blocked by demonstrators in Sidon and Furn el Chebbak in solidarity with the victims’ families. The judge had been summoned for questioning Lebanon’s caretaker prime minister and three former ministers on suspicion of negligence that led to the deadly explosion. He was removed from the case after a complaint filed by two of the former ministers he had accused. The court that ordered the removal questioned the judge’s impartiality as his home was damaged in the blast (New York Times, 18 February 2021). Demonstrators last week said that the appointment of a new judge would lead to delays, and raised concerns that the investigation was being politicized. The 4 August 2020 explosion was one of the largest non-nuclear explosions in history, killing 200 people, injuring thousands, and destroying several neighborhoods (BBC, 11 August 2020). Some documents suggest that both the president and prime minister had been warned shortly before the blast that the ammonium nitrate stored unsafely could destroy the capital if it exploded (Reuters, 19 February 2021).

Lastly, in Turkey, several demonstrations were held across the country to denounce the alleged execution of 13 Turkish captives – mostly soldiers and police officers — by the PKK in Iraq. The PKK has denied responsibility, claiming that the hostages were killed in airstrikes conducted by the Turkish military. Last week, Turkey arrested at least 718 people across 40 provinces for their alleged links to the PKK. Among those arrested were officials from the pro-Kurdish Peoples’ Democratic Party (HDP). The party leaders had expressed their “deep sadness” for the death of the captives and called on the PKK to release the remaining prisoners (Euronews, 15 February 2021). The HDP, Turkey’s second largest opposition party, denies any links to the PKK (France 24, 15 February 2020).