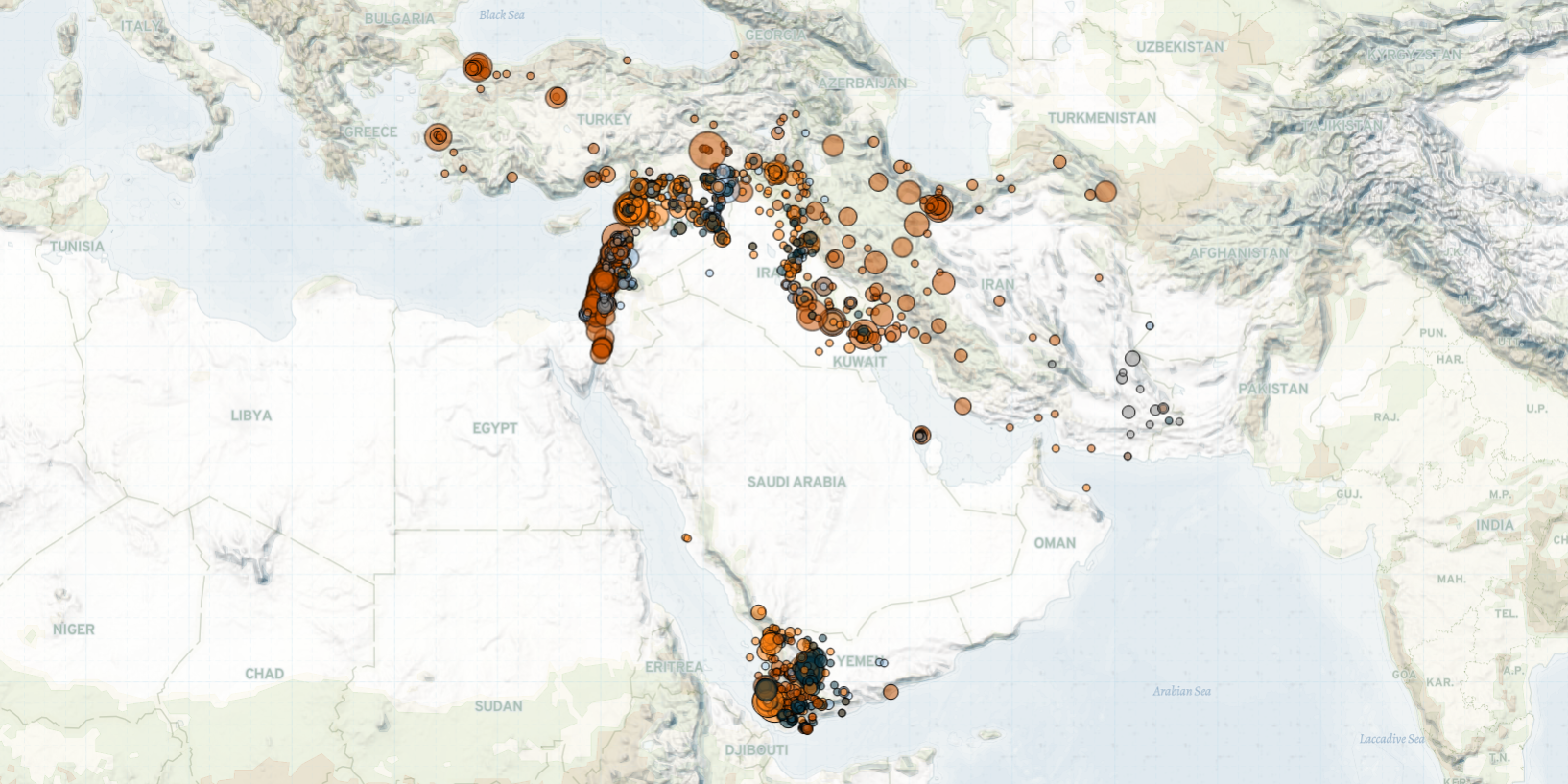 Last week in the Middle East, fighting between Houthi and pro-Hadi forces continued in Yemen, with intense fighting reported in several governorates, including in Marib, Al Jawf, and Taizz. The Saudi-led coalition carried out airstrikes targeting Sanaa, while Houthi forces continued their drone and missile attacks against Saudi Arabia. In Syria, Syrian Democratic Forces (QSD) stormed a hospital in Shiheil, assaulting and detaining medical staff and damaging equipment. Elsewhere in Syria, several members of the Syrian National Army (JWS), as well as civilians, were injured in an explosion in Al Hasakeh’s Mabrouka, while an IED injured and killed Hamza division forces in Al Bab. Elsewhere, Islamic State (IS) militants killed six civilians from the same family in Tikrit district. Lastly, demonstrations against poor economic conditions were held in several countries in the region, including in Yemen, Iraq, Lebanon, and Iran.

In Yemen, Marib, Al Jawf, and Taizz governorates continue to be focal points for clashes between pro-Hadi and Houthi forces. However, Hajjah, Sanaa, and Sadah also saw significant upticks in violence between 6-12 March relative to earlier periods. The Houthi offensive toward Marib city continues to be a driving force for violence in Marib’s Sirwah and Al Jawf’s Khabb wa ash Shaaf district. In Marib, Houthi forces captured multiple areas in the Sirwah district south of the Marib Dam (Twitter, 6 March 2021) and multiple sites in the Raghwan district (Twitter, 7 March 2021). Frontlines in Al Jawf were also significantly more active than during the previous week with clashes occurring throughout the week in Khabb wa ash Shaaf. Houthi forces secured more sites in the district as part of their advance toward Marib City (Twitter, 7 March 2021). Houthi forces have also increased their shelling of Marib City with ballistic missiles since the beginning of the offensive. On 11 March, they targeted the headquarters of the Ministry of Defense in Marib City (Yemen Press Agency, 11 March 2021).

The southern governorates of Aden, Hadramawt, and Lahij also experienced a number of protests and violent demonstrations between 6-9 March over poor service provision by authorities and the deteriorating exchange rate. Demonstrators set fires and obstructed streets in multiple districts in Aden (Aden al Ghad, 8 March 2021), in Hadramawt’s Al Mukalla City (Al Masdar, 9 March 2021), and in Lahij’s Al Hawtah district (Nukhba Hadramawt, 9 March 2021). While demonstrations are common in Aden and Hadramawt, they are rarely accompanied by major road obstructions and fires, and the escalation over the period of 6-9 March demonstrates the intense level of dissatisfaction that residents feel toward authorities.

In Saudi Arabia, Houthi forces continued their consistent drone and missile attacks on Saudi assets between 6-9 March. On 7 March, Houthi forces reported that they targeted the Ras Tanura fuel port, Aramco facilities in Dhahran, the Jazan area, and the Abha area with 14 drones, eight Badr precision rockets, and one Zulfiqar ballistic missile (Ansar Allah, 7 March 2021). Saudi military forces intercepted most of the attacks. However, one drone did cause small damage to the Ras Tanura oil storage facilities, while the Zulfiqar missile landed not far from Saudi Aramco expat housing units nearby. “The strike was undertaken at a distance of around 800-900 miles, exceeding the range of any known Houthi ballistic missile launch (previous Burkan-2H strikes reached 650 miles or less)” (Washington Institute, 12 March 2021).

In northwest Syria, clashes took place between opposition rebels and the People’s Protection Units (YPG) along existing fronts in the northern Aleppo countryside, including the Kafr Kalbein and Kaljibrin fronts. Clashes coincided with Turkish artillery shelling on numerous areas held by the YPG. In eastern Syria, members of the QSD stormed a hospital in Shiheil in Deir-ez-Zor. QSD members physically assaulted and then detained several medical staff members and destroyed hospital equipment. Elsewhere, a vehicle-borne IED went off in Al Hasakeh’s Mabrouka, targeting a JWS position and wounding several members of the faction, as well as civilians. In Al Bab, an IED went off targeting a Hamza Division command center, killing and wounding an unknown number of fighters.

Meanwhile, in Iraq, protests continued last week and were reported in Thi-Qar, Muthanna, Baghdad, Basrah, and Missan provinces. The protesters again call for the resignation of local governments and the improvement of the economic situation. Elsewhere in Iraq, supporters of the Kurdistan Workers’ Party (PKK) clashed with the Iraqi army in Sinjar on 10 March. The rioters prevented the Iraqi army from entering the town. One rioter was injured, though no fatalities were reported. On 11 March, Asayish blocked roads leading to Sinjar city to prevent the Iraqi army and federal police from entering the city. Iraqi forces intended to remove Asayish forces from Sinjar in accordance with the 9 October agreement between Erbil and Baghdad (Shafaaq News, 11 March 2021).

Separately, an unidentified gunman killed a civilian in the industrial district of Amara city on 10 March. The targeted civilian is the father of an activist and lawyer who was kidnapped in October 2019 in Missan province, though the motive behind the killing remains unknown. One day later, the killing triggered demonstrations in Baghdad, Hilla, Amara, Nassriya, and As Sawamah cities. Demonstrations in As Sawamah turned violent and resulted in 15 injured policemen (Al Mirbad, 10 March 2021). In the Tikrit district of Sala Al Din province, IS militants disguised as Iraqi security killed six civilians from the same family, a lawyer, and a policeman in a targeted attack with suppressed weapons in Al Bo Dour village. One of the militants was previously expelled from the local community due to his ties to violent Islamist organizations. The victims reportedly acted as informants for the Popular Mobilization Forces (PMF) (Kurdistan24, 13 March 2021).

In Lebanon, anti-government demonstrations escalated last week, with over 320 demonstration events staged across the country, marking more than a 50% increase compared to the week prior. The number of violent demonstration events remains constant, with more than 100 cases of demonstrators blocking roads and highways with burning tires and dumpsters. Also similar to the week prior, security forces engaged with demonstrators only in a few instances. Lebanon’s President Michel Aoun had called on the army to take immediate action and to open up roads across the country (Reuters, 8 March 2021). The army chief however issued a statement suggesting that “the officer also is suffering and is hungry” and emphasizing that “the political crisis has been reflected on all levels, especially economically, leading to high poverty and hunger rates” (The961, 8 March 2021). He urged the government to find long-lasting solutions to stop the country’s financial meltdown. The Lebanese currency has continued to plummet to all-time lows; since October 2019, the Lebanese pound has lost 90% of its value, including more than 25% in recent weeks alone (Associated Press, 16 March 2020).

Lastly, in Iran, retirees continue to stage nationwide protests outside the Social Security Organization in Tehran and in at least 25 other locations around the country to demand higher pensions and improved healthcare services. Protesters maintain that their current pension is insufficient to cover the rising cost of living. On 7 March, security forces intervened and forcefully dispersed the demonstrators in Tehran, reportedly battering a group of demonstrators. At least four people, including a journalist covering the event, were arrested (Radio Farda, 7 March 2021). The Social Security Organization is Iran’s largest pension fund, which provides benefits, health coverage, and pension payments to more than 40 million Iranians (Bloomberg, 15 April 2020). Delayed government contributions to the fund have created financial constraints, negatively impacting the quality of the services provided by the organization in recent years (Iran International, 4 September 2020).