ACLED’s 2020 annual report reviews the past year of data on political violence and demonstration activity around the world. Access the full report as well as an executive summary of key findings below.

One year since the official start of the pandemic in March 2020, COVID-19 has killed more than two million people and brought at least half the earth’s population under lockdown (New York Times, 11 March 2021; New York Times, 3 April 2020). The health crisis has had major impacts on worldwide conflict and disorder patterns, contributing to an overall decrease in political violence levels last year even as it fueled an increase in demonstration activity. And while the pandemic’s effects have been global in scale, they have not been felt equally across conflict contexts: although violence declined on the aggregate level, it rose in nearly half the world’s countries. As vaccine distribution accelerates and countries relax public health restrictions, conflict levels are expected to increase throughout 2021(for more, see ACLED’s special report: Ten Conflicts to Worry About in 2021).

Last year, ACLED expanded data collection to Latin America and the Caribbean, East Asia, the United States, and all of Europe, achieving near global coverage. Our 2020 annual report reviews the past 12 months of data on political violence and demonstration activity around the world.

Conventional conflicts continued to rage. The countries that registered the highest number of political violence events in 2020 are predominantly those experiencing conventional conflicts, like Syria, Yemen, Ukraine, and Afghanistan. That Mexico also tops the list reveals how the country’s gang violence has created a conflict environment that rivals an active warzone. All of these countries, with the exception of Ukraine, additionally registered the highest numbers of fatalities in 2020, underscoring the continued lethality of these ongoing conflicts. At the same time, many of these countries also experienced the largest overall declines in conflict activity in 2020. That they continue to top the list of most violent countries speaks to the persistence of these conflicts amid the COVID-19 pandemic.

Identity militia activity is on the rise. Nearly all types of conflict actors reduced their activity overall between 2019 and 2020, except for identity militias. Identity militias are the only actor type that increased their engagement in violence. Identity militias — which ACLED defines as armed groups organized around a collective, common feature including community, ethnicity, region, religion, or livelihood — include the Dan Na Ambassagou ethnic Dogon militia in Mali, the Tribal Mobilization Forces in Iraq, and the Volunteers for Defense of Homeland in Burkina Faso. There was a proliferation of identity militias in Africa especially last year, with a 46% increase in the number of distinct, named identity militias active in 2020 relative to 2019. 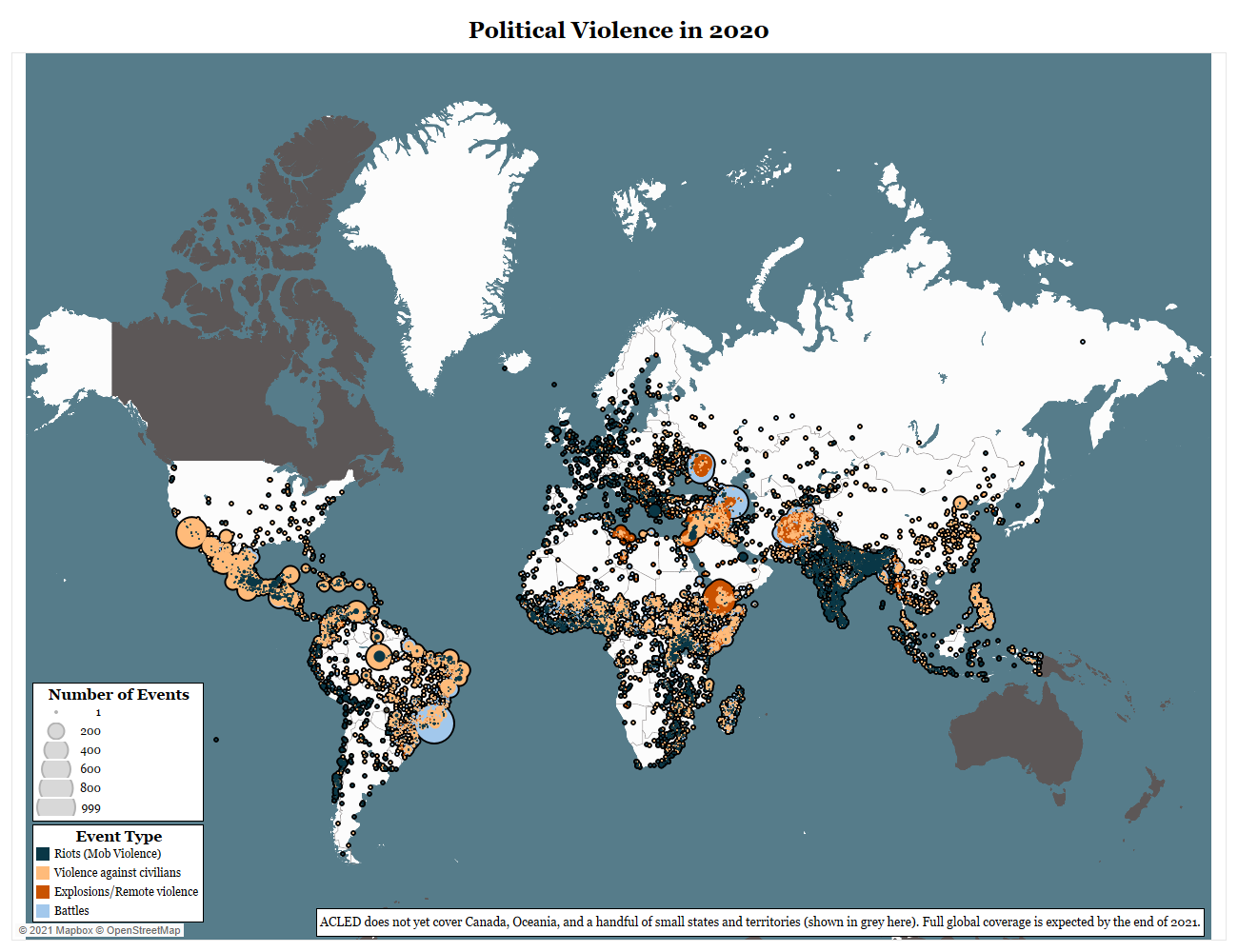 Update, 2 August 2021: Statistics on civilian targeting perpetrated by unidentified groups as well as global demonstration activity have been updated to reflect new information incorporated into the latest data.

Curtis Goos is a Research Analyst at ACLED. He holds a BA in International Studies and French from the University of Iowa and a Master in Public Affairs from Princeton University. His thematic research interests include international migration, state-led efforts to prevent violent extremism (PVE), and peacebuilding efforts in post-conflict countries. His regional interests include Francophone Sub-Saharan Africa.