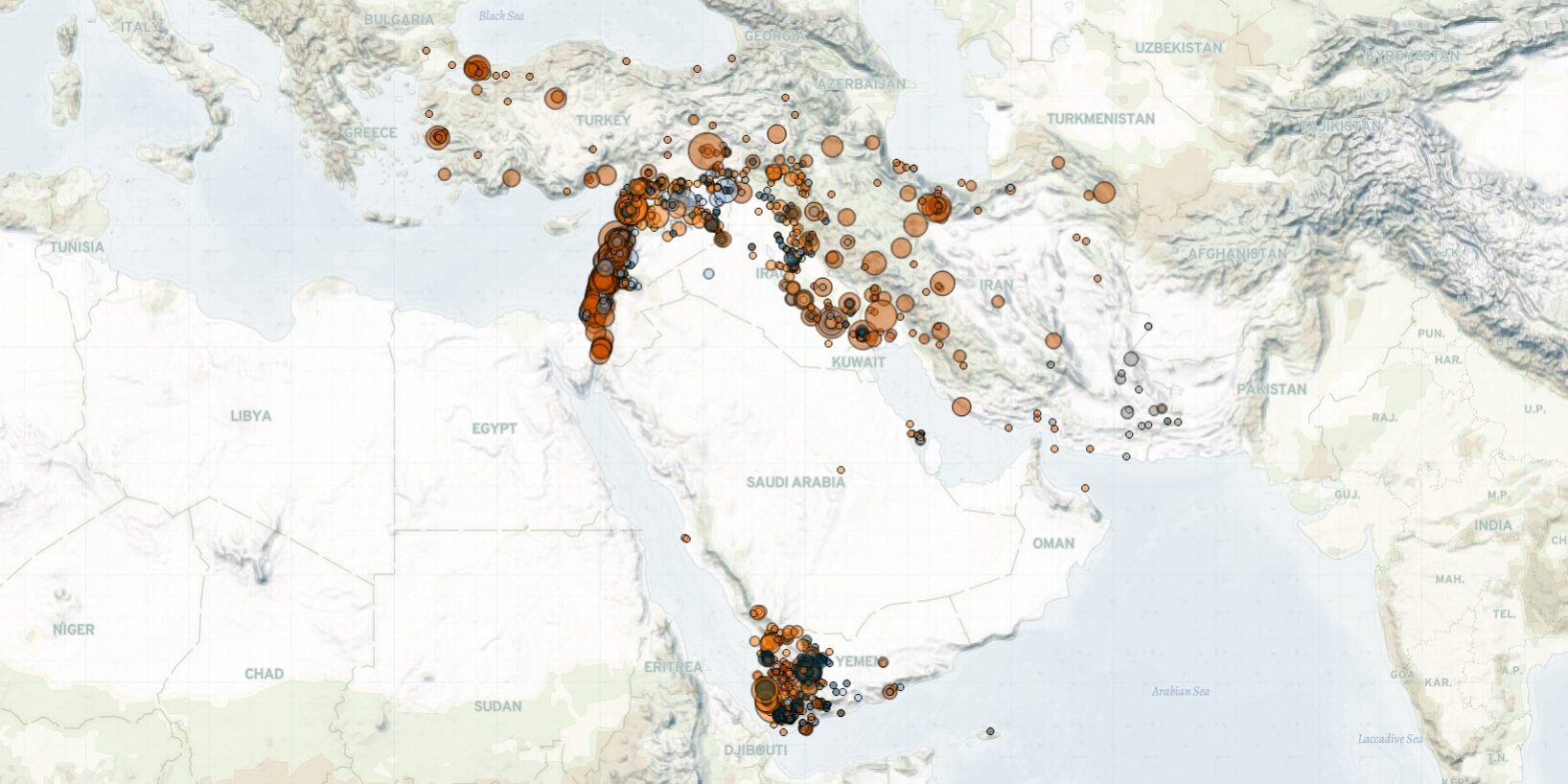 Last week in the Middle East, clashes between Houthi and pro-Hadi forces continued in Yemen, with the Houthis capturing a number of sites in Marib, whereas pro-Hadi forces made territorial gains in Taizz. In Iraq, seven rockets were fired at US forces stationed at Balad Air Base, though no casualties were reported. Meanwhile, in Syria, fighting intensified between Turkey-backed opposition factions and the Peoples’ Protection Units (YPG) in northern Aleppo, with two rockets landing across the border in Turkey. Demonstrations over economic issues continued in Yemen and Lebanon, while students protested in Iraq to demand the postponement of entrance exams. Lastly, a Palestinian was killed by Israeli soldiers during a demonstration against the expansion of settlements.

In Yemen, the Marib, Taizz, and Hodeidah governorates were focal points for clashes between pro-Hadi and Houthi forces between 13 and 19 March. While the Houthi offensive toward Marib City has previously included military operations in both Marib and Al Jawf, military clashes were concentrated in Marib last week. The governorate saw three times as many clashes between Houthi and pro-Hadi forces as the previous week. Houthi forces captured a number of sites in Marib throughout the week, including parts of Jabal Haylan (Aden al Ghad, 19 March 2021) and Malbuda (Hayrout, 17 March 2021). Meanwhile, Al Jawf saw a dramatic reduction in military activity. In Taizz, pro-Hadi forces continued their offensive, and clashes spread to the Hayfan and Sabir al Mawadim districts, where pro-Hadi forces captured a number of locations in both districts (Mareb Press, 17 March 2021). Frontlines in Hodeidah remained static; however, there was a significant increase in artillery shelling and Saudi-led coalition airstrikes in the governorate in comparison to the previous week.

In southern Yemen, demonstrations over economic issues escalated on 15 and 16 March. In Hadramawt, military forces opened fire on hundreds of demonstrators in Sayun, where they had gathered to protest deteriorating economic conditions (Yemen Window, 15 March 2021; Hadramawt 21, 15 March 2021). In Aden, dozens of demonstrators broke into the Maashiq Presidential Palace (France 24, 16 March 2021), the current seat of the internationally recognized government, during a protest against the poor service provision and unpaid salaries.

In Saudi Arabia, Houthi forces continued to target the country with drone strikes. The most notable attack occurred on 19 March when Houthi forces targeted an Aramco facility in Riyadh with six drones. The attack caused a fire at the facility, but Saudi officials stated that there were no injuries or supply disruptions as a result of the attack (Reuters, 19 March 2021). The majority of attacks throughout the week focused on the Abha Regional Airport and King Khalid Air Base in Asir. There were no reports of any significant damage or casualties associated with those attacks.

In Iraq, unidentified militants fired at least seven rockets at US forces stationed at Balad Air Base in Sala Al Din province. Two rockets overshot the base and damaged at least one civilian residence in Albu Hassan village, which is adjacent to the air base. No casualties were reported (Rudaw, 15 March 2021). Elsewhere in Iraq, IED attacks continue to target convoys affiliated with the Global Coalition. Separately, students protested in Kerbala, Wassit, Basrah, Thi-Qar, and Missan provinces, demanding that the 20 March 2021 university entrance exams be postponed. This was after the Ministry of Education announced the exam dates, giving students only a few days to prepare, instead of the 14-day notice they are required to give. In Sulaymaniyah city, students rioted in front of the education directorate. Security forces fired live ammunition into the air to disperse the rioters, while the latter threw stones at the building and attempted to enter it. Two rioters were injured, with one receiving a head injury after being hit by a policeman (Rudaw, 18 March 2021).

In Syria, protests broke out in numerous areas across the country on the 10th anniversary of the Syrian uprising. Protests mostly took place in opposition-held areas in Idleb and Aleppo provinces, though others occurred in regime-held areas in the south, including in Dar’a province (Al-Monitor, 18 March 2021). Elsewhere, intense clashes and exchanges of shelling barrages between Turkey-backed opposition factions and the YPG took place in northern Aleppo. Two rockets, likely fired by the YPG, landed across the border in Turkey’s Killis. Turkey responded by extensively shelling YPG-held areas in northwest Syria (Anadolu Agency, 19 March 2021). In eastern Syria, clashes broke out near Ar-Raqqa’s Ein Issa between opposition factions operating under Operation Peace Spring and Syrian Democratic Forces (QSD), which again led to the displacement of numerous families from Ein Issa sub-district.

Meanwhile, in Lebanon, nationwide demonstrations continued for the third consecutive week, with over 220 demonstration events reported across the country last week. This marked a decrease in the number of demonstration events compared to the week prior. Almost one third of the events were violent demonstrations, with demonstrators blocking roads and highways with burning tires and debris. Demonstrations spiked on 16 March as the Lebanese pound hit a new record low against the US dollar, but fewer demonstrations were staged in the following days as the currency bounced back (Naharnet, 20 March 2021). The Lebanese pound rose on the black market amid hope that a new government would be formed soon, after President Michel Aoun and Prime Minister-designate Saad Hariri agreed to resume discussions on the formation of a new government (The961, 19 March 2021). However, in light of continued political bickering in recent days, the socio-economic situation remains unstable in Lebanon.

Lastly, in Palestine, a Palestinian was fatally shot by Israeli soldiers east of Nablus during a demonstration against the establishment of an unauthorized settler outpost nearby. Two soldiers reportedly fired live ammunition at demonstrators after a group hurled rocks at them. According to eyewitnesses, soldiers opened fire without warning and shot the victim in the head from close range (Haaretz, 19 March 2021). Since the 1967 occupation of the Palestinian territory, 132 settlements and 135 unauthorized outposts have been established in the West Bank (Peace Now, 2021). The Palestinians and the majority of the international community view the settlements as a violation of international law and an obstacle to Palestinian statehood (Al Jazeera, 19 March 2021). Palestinians in the West Bank regularly hold demonstrations against the expansion of settlements, many of which turn violent. Earlier this month, the International Criminal Court (ICC) launched an investigation into alleged crimes committed by Israel in the Palestinian territories, including its settlement policy (The Time of Israel, 19 March 2021). Population transfer is considered a war crime under the Rome Statute, with the Geneva Convention banning an occupying power from transferring its population to occupied territories (Associated Press, 3 March 2021).