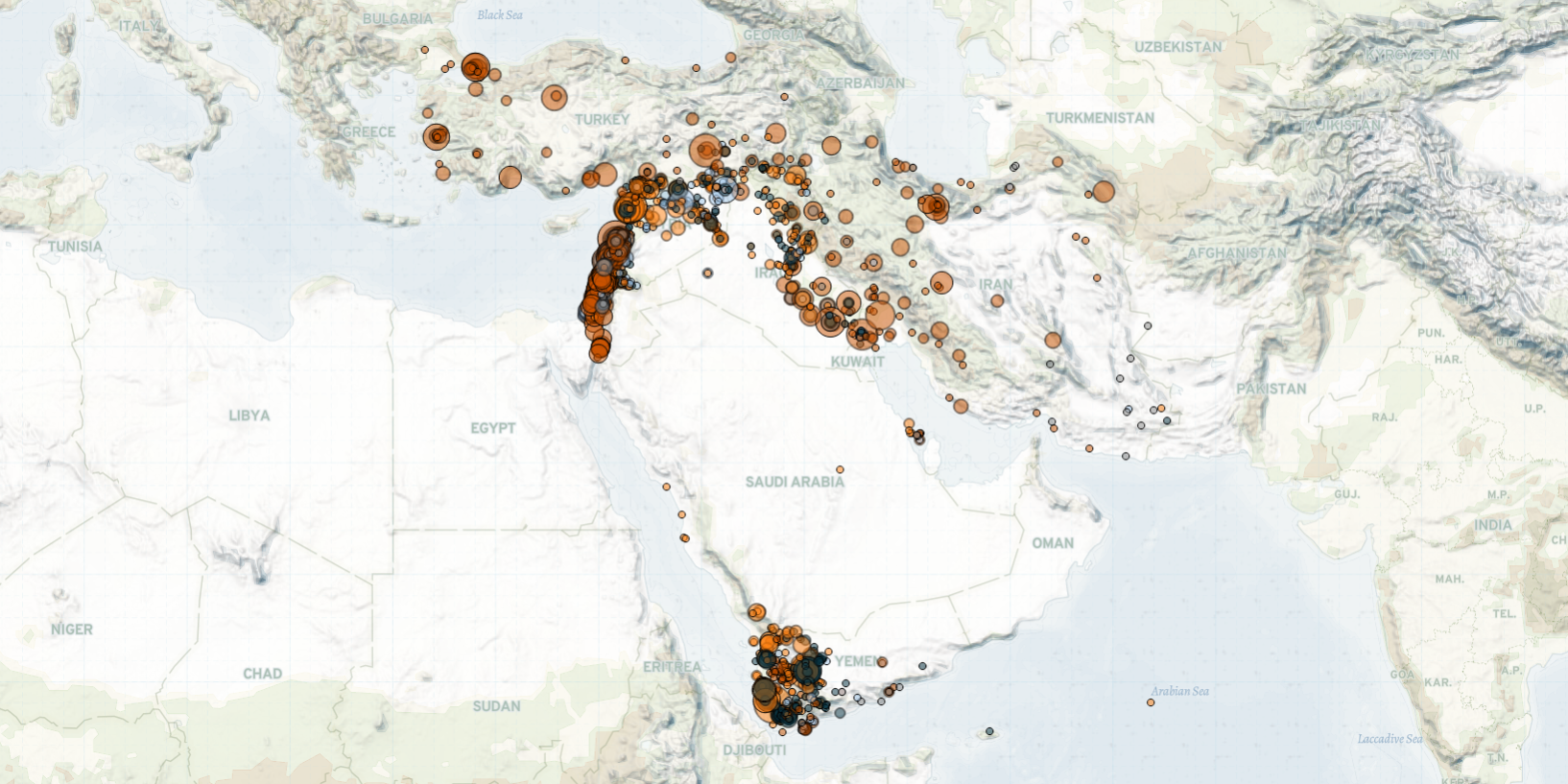 Last week in the Middle East, fighting between pro-Hadi and Houthi forces continued in Yemen, but at a lower level compared to the week prior. The Houthis continue to target Saudi Arabia with ballistic missiles and drones, despite Saudi’s proposal for a peace deal. Elsewhere, Syrian regime forces and their Russian allies intensified their attacks in the greater Idleb area. Meanwhile, the Turkish military launched several airstrikes targeting the Syrian Democratic Forces (QSD) in Ar-Raqqa. In Iraq, tribal conflicts erupted over several days, killing at least five people. Anti-government demonstrations were staged in several countries, including in Iraq, Lebanon, and Turkey. Lastly, anti-Netanyahu demonstrations were halted in Israel amid the political stalemate.

In Yemen, the Hodeidah, Marib, and Taizz governorates continue to be focal points for armed clashes between pro-Hadi and Houthi forces. However, all three governorates saw a reduction in conflict last week, by 25%, 45%, and 25%, respectively. These trends were driven by a substantial decrease in airstrikes in Hodeidah, a decline in armed clashes in Marib, and despite a number of territorial shifts in Taizz. In contrast, the Sirwah, Medghal, and Marib districts all saw significant increases in conflict last week.

On 22 March, Saudi officials proposed a peace deal with the Houthis, calling for a ceasefire across the country. Houthi officials have rejected the deal on the grounds that restrictions on air traffic to Sanaa International Airport and imports to Houthi-controlled Hodeidah must be removed without preconditions (France 24, 23 March 2021). The sequencing of provisions for a peace deal remains a challenge for negotiations, and the recent proposal does not fundamentally shift the Saudi position (Twitter, 22 March 2021). Related to this proposal, Saudi authorities cleared four oil tankers to dock at Hodeidah on 24 March after preventing such imports since the beginning of 2021 (CNN, 11 March 2021). However, the barrage of drone and missile attacks targeting Saudi Arabia on 26 March likely reflects the dissatisfaction of Houthi forces with the limited concession on imports and the broader peace proposal.

In Saudi Arabia, military forces continue to contend with Houthi ballistic missile strikes and drone attacks. Houthi forces threatened a wider variety of geographic locations last week than in recent weeks, launching attacks targeting seven Saudi governorates. The most significant of these attacks was a volley of eight ballistic missiles and 12 Samad-3 drones targeting a military base in Dammam and oil assets in Ras Tanura, Yanbu, Rabigh, and Jizan. The attack was intended to coincide with the Houthis’ National Resilience Day on 26 March, commemorating six years of resisting the Saudi-led military campaign in Yemen.

In Syria, Syrian regime and Russian forces carried out several attacks against the greater Idleb area on 21 March, marking a significant escalation since the ceasefire agreement between Russia and Turkey came into effect on 5 March 2020. Regime forces shelled the Atareb Surgical Hospital in western Aleppo, killing at least eight and wounding several others. In western Idleb, Russian warplanes carried out a number of airstrikes near the Turkish border, including one that hit a facility in Sarmada area reportedly belonging to a humanitarian NGO. The strikes killed a civilian and led to massive fires. Another Russian attack was recorded in the vicinity of Qah, where many IDP camps are located, using a long-range missile, though with no casualties reported. The attacks coincide with a Russian proposal to Turkey to jointly open three crossings between the opposition and Hayat Tahrir al Sham (HTS)-held enclave and regime-controlled areas in both Aleppo and Idleb provinces. The escalation may have been timed to pressure Turkey into opening the crossings. On 24 March, Russian media outlets stated that Turkey had agreed to the proposal, though Turkey denies reaching a deal with Russia (Daily Sabah, 25 March 2021).

In northeast Syria, clashes continued along the Ein Issa front in Ar-Raqqa between the joint Turkish forces and the Syrian National Army (JWS) against the QSD. During the clashes, Turkish warplanes carried out several airstrikes on QSD positions, the first reported in 17 months (Arab News, 21 March 2021).

In Iraq, protests took place in Rifai district in Thi-Qar province over the dismissal of the mayor on 19 March and the appointment of a new one. Demonstrations turned violent on 21 March when a clash using stones and some firearms erupted between supporters of the new mayor and the old mayor, resulting in injuries. The new mayor resigned on 25 March, causing hundreds of his supporters to protest his resignation the following day.

Separately, tribal disputes escalated to armed clashes in Basrah and Thi-Qar provinces of Iraq on 22 March, lasting several days, resulting in casualties, including civilians, and damage to property. Some of the tribal conflicts started as personal quarrels, though the cause for others remains unknown (Shafaaq News, 23 March 2021)

In Lebanon, the number of demonstration events continues to decrease, with only about 40 events reported over the last week. Anti-government demonstrations spiked on 22 March, following the meeting between Prime Minister-designate Saad Hariri and President Michel Aoun, which once again failed to reach an agreement on forming a new government. While the value of the Lebanese pound dropped following the meeting, it slightly bounced back in the following days and has remained stable since then (The961, 28 March 2021). Hariri was selected in October 2020 to form a new government after the government of Hassan Diab resigned in the wake of Beirut’s port explosion. Hariri wants a government of technocrats, while Aoun and his Free Patriotic Movement are pushing for the right to name six ministers (Arab News, 23 March 2021). A new cabinet in Lebanon is necessary for carrying out reforms that could unlock desperately needed foreign aid. The continued political deadlock is dashing hopes of a timely reversal of the financial crisis in the country. Experts continue to warn of “an open-ended crisis” in Lebanon that could lead to the government’s total loss of control (Reuters, 26 March 2021).

In Turkey, President Recep Tayyip Erdogan issued a decree on 20 March, ordering Turkey’s withdrawal from the Istanbul Convention (The Guardian, 21 March 2021). Turkey was one of the first signatories of the international accord, which was designed to protect women from violence. Erdogan’s decision triggered over 40 demonstration events across the country last week, with demonstrators calling on the government to reverse the decision. Turkish officials argue that domestic law protects Turkish women sufficiently, and that the Istanbul Convention had been “hijacked by a group of people attempting to normalize homosexuality” (Al Jazeera, 27 March 2021). Women and the LGBT+ community argue that the withdrawal reduces their rights and puts their safety at risk. The World Health Organization has found that 38% of women in Turkey are subject to domestic violence (Reuters, 24 March 2021).

Elsewhere, parliamentary elections were held in Israel on 23 March for the fourth time in two years. Neither Prime Minister Benjamin Netanyahu’s alliance of right-wing and religious parties, nor the heterogeneous collection of centrist, left-wing, right-wing and Arab opposition parties were able to win a majority (New York Times, 25 March 2021). The results prolong a two-year political impasse that has left the country without a stable government, setting the stage for protracted coalition negotiations that many expect to fail, leading to yet another election. Netanyahu’s Likud party went from 36 seats to 30, and despite hopes by his supporters that the highly successful COVID-19 vaccination drive in recent months would play in his favor, Netanyahu failed to secure a decisive victory. Netanyahu’s opponents have criticized him for earlier missteps during the pandemic and argue he is unfit to rule while under criminal indictment on corruption charges, fearing that Israel’s democracy is in danger. Led by the Black Flag Movement, thousands of demonstrations have been staged in Israel against the Prime Minister for 39 consecutive weeks, with the last round of demonstrations held on 21 March. Organizers have halted demonstrations, dismantling an encampment outside Netanyahu’s official residence in Jerusalem. They indicate that if Netanyahu is successful in forming the next government, they will restart their protest movement (Haaretz, 22 March 2021).