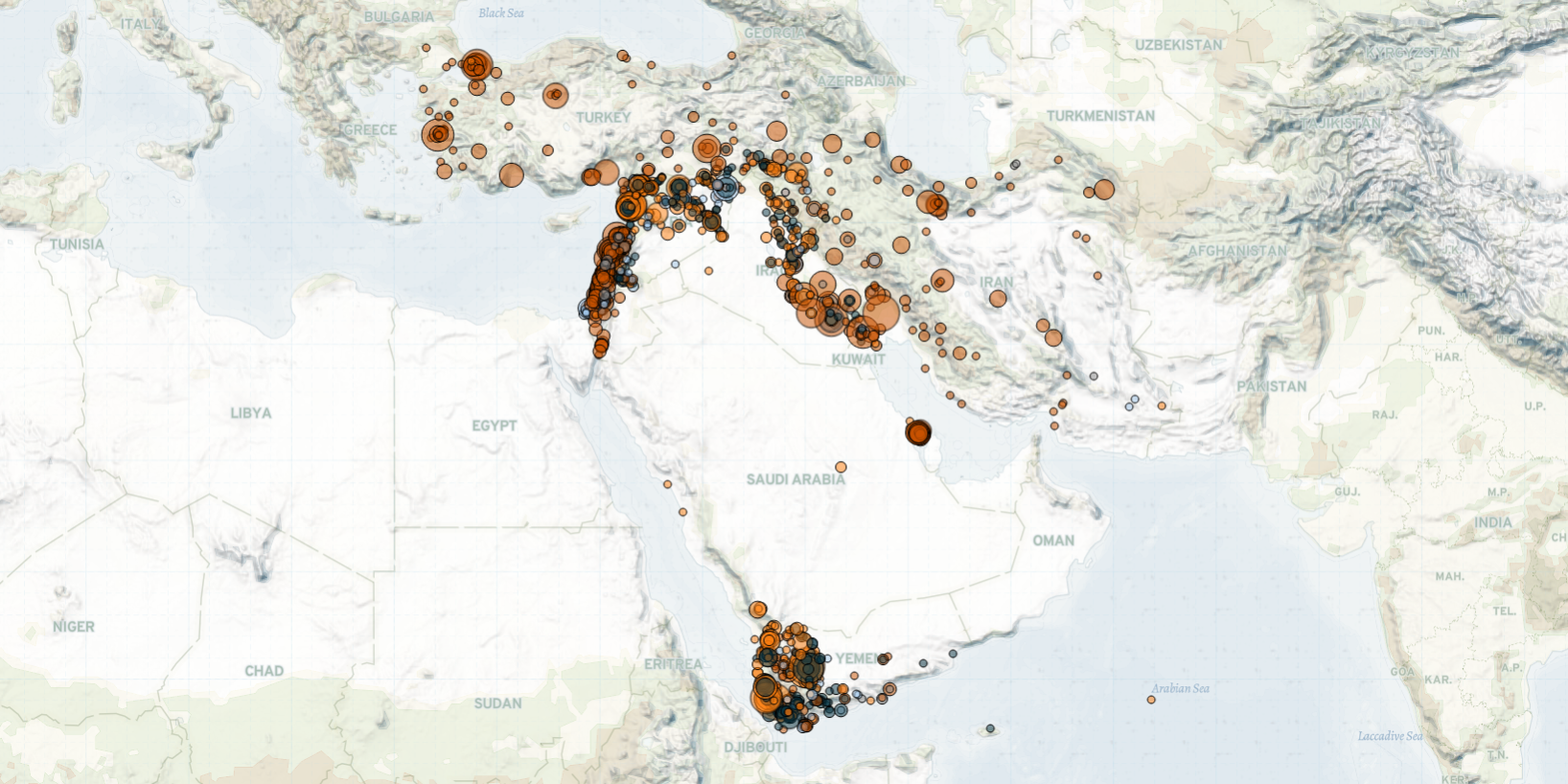 Last week in the Middle East, clashes were reported between pro-Southern Transitional Council (STC) and pro-Hadi forces in Yemen’s Abyan for the first time in 2021. In Bahrain, protests continued over the death of a political prisoner amid the outbreak of COVID-19 at Jaw Prison. In Iraq, the Al Balad Airbase housing US and Coalition forces was shelled by an unidentified armed group. Meanwhile, in Syria, the Russian military carried out airstrikes in Idlib, while Israeli warplanes targeted weapons and ammunition depots in Rural Damascus province. In Jordan, the former Crown Prince Hamzah was placed under de facto house arrest and several other people were arrested for alleged undermining of national security. Lastly, an Iranian vessel was damaged by a mine in the Red Sea, in an apparent Israeli attack.

In Yemen, violence fell to its lowest point since the first week of February 2021. Marib and Hodeidah remain focal points for conflict in the country; however, both experienced reductions in armed clashes and airstrikes relative to the previous week. Conflict levels in Taizz remained relatively constant as frontlines between Houthi and pro-Hadi forces became increasingly static and the number of territorial gains continued to decline.

Despite significant decreases in overall levels of violence, Ad Dali, Sadah, and Abyan all saw increases in violence relative to previous weeks. In Abyan, tensions between pro-STC forces and pro-Hadi forces have reached a boiling point with clashes between the two forces occurring throughout the week in the Khanfir district (Nukhba Hadramout, 9 April 2021; Nukhba Hadramout, 5 April 2021). These were the first clashes between the two forces in Abyan since December 2020 (for more on Abyan clashes, see this recent piece by ACLED).

In Saudi Arabia, Houthi forces continued to target assets in the southwestern Asir and Jizan provinces with explosive drone attacks. While Saudi military forces intercepted the majority of strikes over the past week, Houthi forces claimed to strike Abha Regional Airport with a Qasef 2k drone (Twitter, 9 April 2021), though there has been no independent confirmation.

In Bahrain, daily protests continued throughout the country against the death of a political prisoner in the Jaw Central Prison. Medical negligence allegedly contributed to the political prisoner’s death amid a COVID-19 outbreak in the facility (Twitter, 6 April 2021). The number of protest events last week reached the highest the country has seen in the past three years. Sustained demonstrations throughout the past two weeks prompted the government to release over 150 detainees from the prison last weekend (Middle East Eye, 10 April 2021).

In Iraq, unidentified militants shelled the Al Balad Airbase in Sala al-Din province housing US and Coalition forces. Two rockets landed near the air base fence while one landed in the adjacent civilian area of Yathrib in Balad district. No casualties were reported (Al Mirbad, 4 April 2021). Demonstrations in Iraq continued throughout last week with administration and economics graduates gathering on Al Haboubi Square and blocking the Al Nasr Bridge in Nassriya city. Demonstrators demand a resolution to the disputed vacant seat of the Thi-Qar governor. They were also joined by those protesting unpaid lecturers after the approval of the 2021 Federal Budget, demanding their enrollment in the Ministry of Education payroll in the new budget (Shafaq, 4 April 2021).

In Syria, Russian warplanes carried out several airstrikes on the Idleb countryside on 6 and 7 April, coinciding with sporadic clashes along existing frontlines in the greater Idleb area. Meanwhile, Hayat Tahrir Al Sham (HTS) detained several Hurras Al Deen members in Idleb city and Jisr-Ash-Shugur district in western Idleb. Since January 2021, over 23 members of Hurras Al Deen, including a commander and a Sharia advisor, have been detained. This comes as part of HTS’ efforts to eliminate potential opposition in northwest Syria stemming from hardline groups, all the while presenting itself as a moderate force on the ground. Unlike previous and deadly HTS-led operations within the enclave in recent years, such as that against Ahrar Al Sham, these security operations underscore that, for now, the group has taken a less violent approach to cement its influence in northwest Syria. In southern Syria, Israeli warplanes carried out airstrikes on the Dimas area in Rural Damascus province, targeting a weapons and ammunition depot. The strikes killed three Syrian and pro-Iran militia fighters and injured four Syrian soldiers (Garda World, 8 April 2021).

In another important development, unprecedented turmoil broke out in the ruling family in Jordan, with the King’s half-brother, former Crown Prince Hamzah, placed under de facto house arrest on 3 April. At least 16 other high-ranking officials were also arrested on charges of targeting the “security and stability of the nation” with the collaboration of unnamed foreign entities (BBC, 4 April 2021). Some have speculated about the potential role of Saudi Arabia and Israel in the plot in an attempt to weaken the monarchy (Middle East Eye, 6 April 2021). Amid strengthening ties between Israel and the Gulf states, there are concerns about Israel giving the custodianship of Jerusalem’s holy Muslim sites to Saudi Arabia, which has been under the management of the Jordanian monarchy for decades (Financial Times, 12 April 2021). According to a former US official, the plot against the King likely did not involve a coup, but rather the incitement of mass demonstrations with the support of disgruntled tribes (Reuters, 3 April 2021). Prince Hamzah, who has been trying to rebuild his influence in recent years and had made public attempts to build closer ties with tribes, has in the meantime signed a letter pledging his loyalty to the King. However, some experts suggest that recent events have likely given Hamzah a greater platform and that one should not think that he has been driven “out of the political scene” (New York Times, 10 April 2021).

Lastly, an Iranian vessel was damaged by an apparent Israeli mine attack in the Red Sea, off the Dahlak Archipelago. According to Iranian officials, the vessel is a civilian ship that was helping to “combat pirates” (BBC, 8 April 2021). The Saudi-led coalition in Yemen and the US Naval Institute allege that it is a covert military ship operated by the Revolutionary Guards of Iran (New York Times, 6 April 2021). In March, the Wall Street Journal (11 March 2021) reported that Israel had struck at least 12 Iranian vessels or those carrying Iranian cargo since late 2019, although many of these attacks had not been disclosed. The recent incident is the fourth in a reported series of attacks on Israeli and Iranian-owned ships in 2021, including two apparent retaliatory attacks by Iran on Israeli-owned ships in February and March (Al Jazeera, 6 April 2021). It marks the first time a vessel deployed for military use has been attacked, escalating the Iranian-Israeli maritime skirmishes.