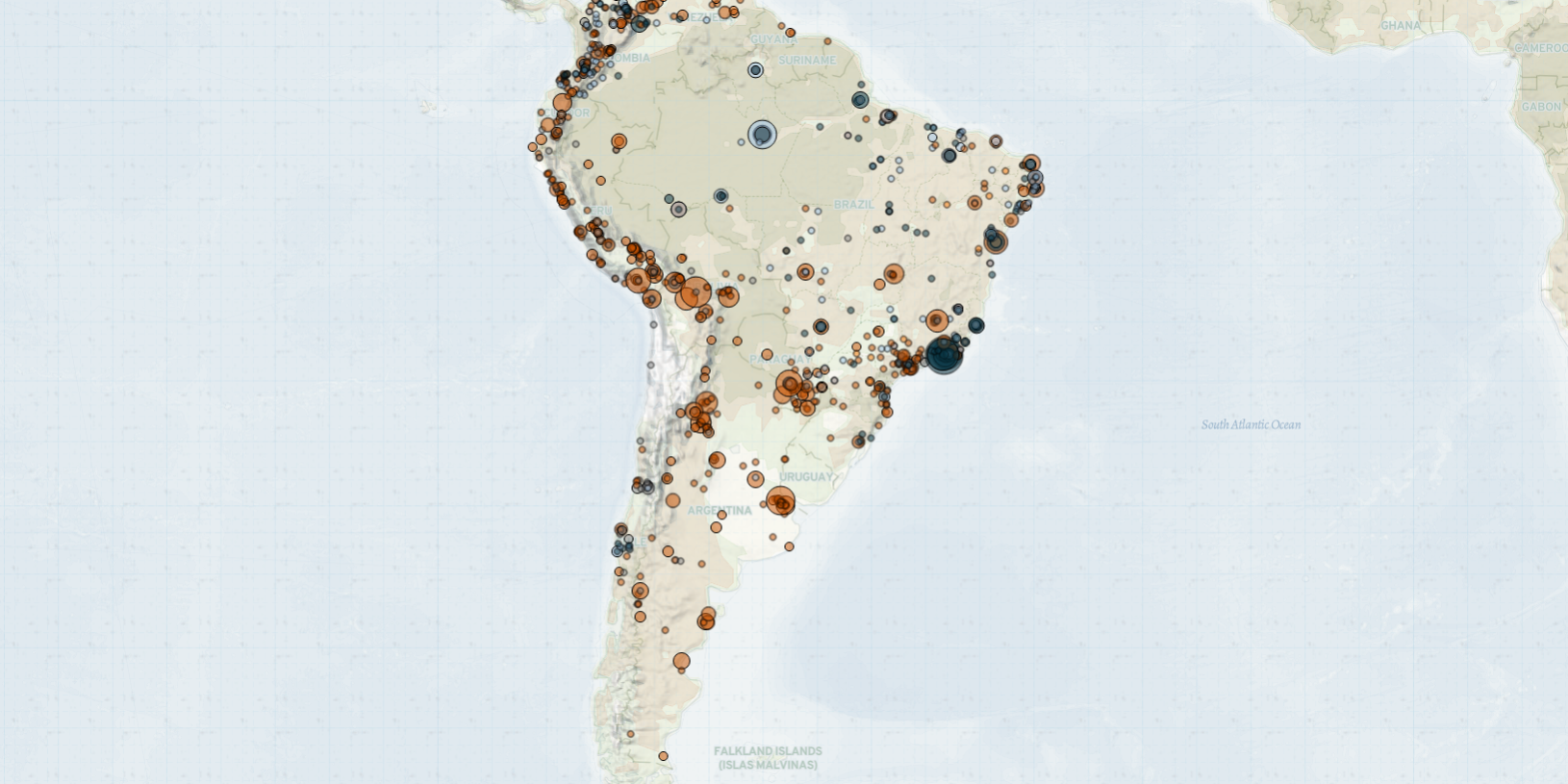 Last week in South America, coca producers took to the streets in Bolivia to protest against the relocation of a coca market. Chile postponed Constituent Assembly elections amidst a spike in coronavirus cases. In the border region of Colombia and Venezuela, violent conflict continued between Venezuelan military forces and dissidents of the Revolutionary Armed Forces of Colombia (FARC). Meanwhile, Brazil saw an increase in bank explosions perpetrated by criminal groups.

In Bolivia, tensions persist around coca leaf markets. Per a long-standing law, there are only two legal coca markets in Bolivia: one used by the Yungean growers in La Paz city, in the Villa Fatima neighborhood, and another in the city of Sacaba, Cochabamba department, for growers of the Chapare region. Recently, the Ministry of Rural Development passed a resolution moving the market in Villa Fatima, and bringing its leadership from under the existing Departmental Association of Coca Producers (ADEPCOCA), the coca grower’s union, to instead under the Movement for Socialism (MAS) party. As such, farmers from the Yunga region, who support ADEPCOCA, fear that the creation of the new market favors growers from the El Chapare region — where former President Evo Morales of the MAS party previously worked as a coca farmer. Last week, coca leaf farmers took to the streets against the relocation of the Villa Fatima coca leaf market and in support of ADEPCOCA. Police used tear gas to disperse the demonstrators, with clashes reported between police and the farmers. More than 11 people were injured, including a journalist who was covering the event (Los Tiempos, 8 April 2021).

Meanwhile, in Chile, the Senate agreed to postpone elections for the new Constituent Assembly. The elections were scheduled to take place on 11 April.  President Sebastian Piñera asked for its adjournment due to a surge in coronavirus infections in the country. The poll has been rescheduled to take place on 15 or 16 May this year (France 24, 6 April 2020). In October 2020, the majority of the population voted to replace the current constitution, which has been in effect since the Augusto Pinochet dictatorship. The Pinochet-era constitution was drafted without popular input during the military dictatorship and was approved in a rigged plebiscite in 1980.

In the border region of Colombia and Venezuela, armed conflict continued between Venezuelan military forces and FARC dissidents in Apure state, Venezuela for the third consecutive week. The Colombian defense ministry ordered an increased military presence along the border with Venezuela in light of the outburst in violence in the region. Historically, the presence of armed groups along the border between Colombia and Venezuela has led to various turf wars, causing the humanitarian situation on both sides of the border to deteriorate. In 2019, cooperation between both countries’ security forces disintegrated after Venezuelan President Nicolás Maduro broke all ties with Colombia President Iván Duque. The Venezuelan government warned that the conflict could lead to a war between the countries and accused the Colombian government of attempting to escalate violence (Colombia Reports, 29 March 2021). Since the beginning of the conflict on 21 March, eight Venezuelan soldiers have been killed and approximately 5,000 Venezuelan citizens have fled across the border to seek refuge in Colombia (Al Jazeera, 10 April 2021). The mass displacement has caused a humanitarian crisis (The Washington Post, 26 March 2021).

In Brazil, at least seven banks were blown up in different cities. Most of the explosions took place in the northeast of the country, namely in the states of Paraíba and Bahia. In at least three of the events, civilians were held hostage, but were later released uninjured. The attacks follow the modus operandi known as ‘New Cangaço.’ The ‘New Cangaço’ name is a play on ‘Old Cangaço,’ which took place in the northeast of Brazil between 1870 to 1930. This modality of crime involves heavily organized armed groups besieging small- and medium-sized cities to intimidate local populations. Their practices consist of blowing up bank agencies, post offices, ATMs, and lottery houses. This phenomenon is the backbone of other types of actions carried out by organized criminal organizations in the region. The stolen money from these financial institutions is used by the groups to acquire new weapons, bolstering organized crime in the country (Revista Jus Navigandi, September 2018).

Last week, four leaders of a ‘New Cangaço’ group named Tropa do Lampião were killed in clashes with military police in the city of São Gonçalo, Rio de Janeiro state. The Tropa do Lampião is originally from the state of Ceará, having migrated to the state of Rio de Janeiro last year. The group formed an alliance with the Red Command (CV), and its leaders were put in charge of some of the CV’s drug trafficking areas in the city of São Gonçalo (O São Gonçalo, 7 April 2021).

Julia Lins Franciotti is the South America Assistant Research Manager at ACLED. She holds an LL.M. degree in Public International Law from Universiteit Leiden. Her research interests include urban violence and organized crime in Latin America and data-driven policymaking for violence prevention and economic development.
14 April 2021
Share
TweetShare on Twitter Share on FacebookShare on Facebook Share on LinkedInShare on LinkedIn