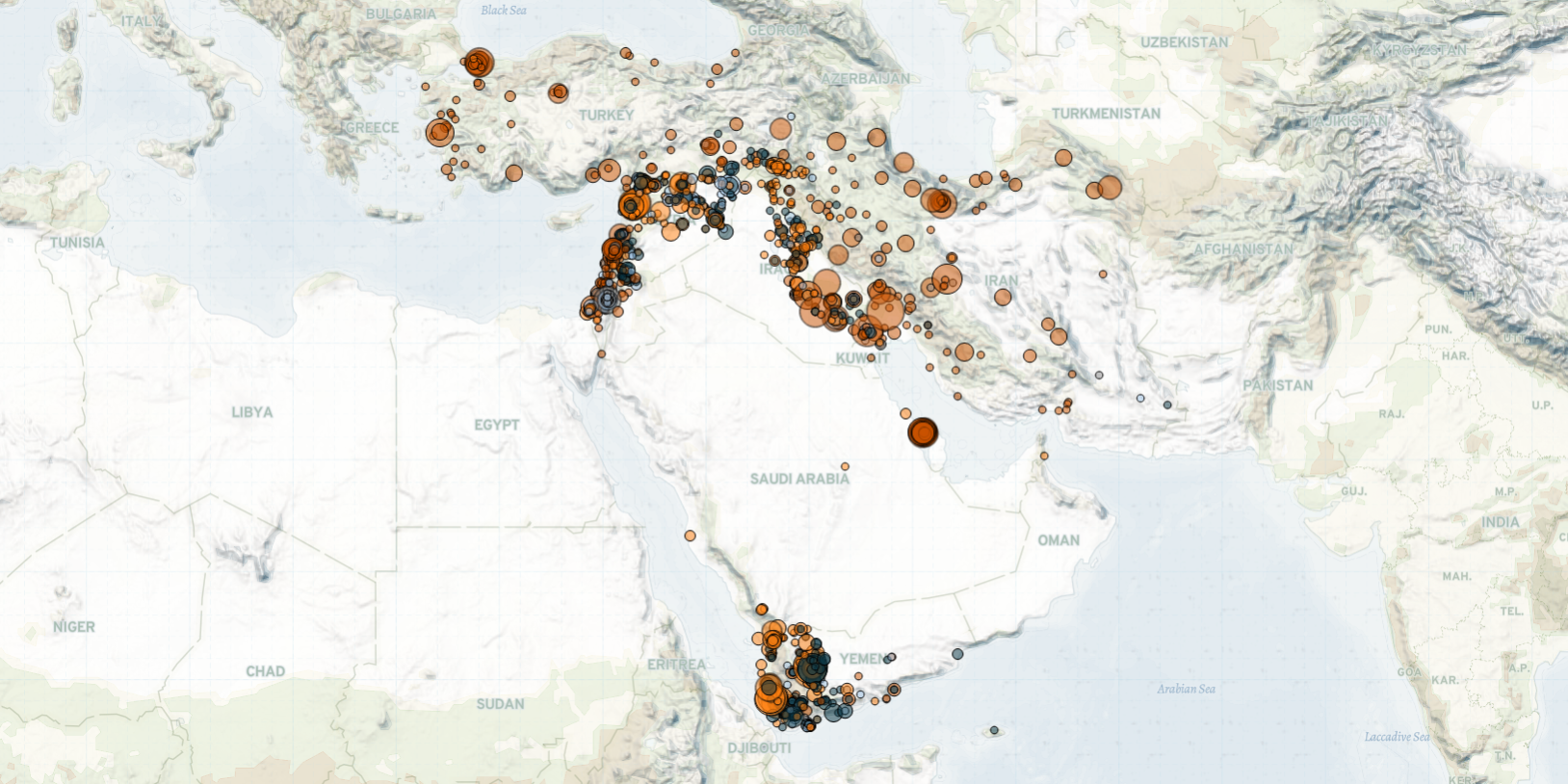 Last week in the Middle East, clashes between pro-Hadi and Houthi forces continued in Yemen’s Marib and Hodeidah governorates while the overall level of violence across the country decreased compared to the week prior. In Syria, Israeli warplanes targeted the positions of regime and pro-Iran militia forces in retaliation for a surface-to-air missile fired from Syria that exploded in Israeli airspace. Elsewhere, the Balad Airbase in Sala Al Din and Camp Victory inside the Baghdad International Airport were targeted by an unidentified group’s rocket fire. Lastly, East Jerusalem was the scene of heightened tensions as police forces clashed with Israeli far-right Lehava members and ultra-Orthodox Jews, as well as Palestinians.

Last week in Yemen, violence fell almost 40% from the previous week, reaching its lowest level since the first week of February this year. The Marib and Hodeidah governorates remain focal points for conflict between pro-Hadi and Houthi forces in the country, accounting for over 60% of the violence between 17 and 23 April. Conflict levels in Marib remained relatively constant with the previous week. The majority of fighting was concentrated in the Sirwah district, where Houthi forces made gains throughout the week (Twitter, 22 April 2021; Twitter, 19 April 2021).

In Saudi Arabia, Houthi forces continued to target the country with bomb-laden drones throughout last week. Houthi forces claimed to strike the Abha Regional Airport (Ansar Allah, 20 April 2021) and King Khalid Air Base (Al Masirah, 17 April 2021); however, the success of these attacks was not independently verified.

In Syria, an unidentified military-grade drone, suspected to have been controlled by Russia, carried out an airstrike on Kherbet Elnaqus area in Hama, killing a civilian and wounding another. Elsewhere, clashes broke out between the Internal Security Forces (Asayish) and the regime’s National Defense Forces (QDW) in Quamishli city in Al Hasakeh on 20 April. Clashes spread to several neighborhoods since and coincided with shelling activity between both sides. On 23 April, Asayish forces took control of Al Tayy neighborhood from QDW. Two ceasefire agreements were reached with Russian mediation last week, although both were short-lived. Casualties from both sides were reported (Al-Monitor, 21 April 2021).

In southern Syria, Israeli warplanes carried out several airstrikes on regime and pro-Iran militia forces positions in Dhameer area in Rural Damascus province. This came after a surface-to-air missile, fired from Syrian territory, exploded in Israeli airspace. Debris from the missile landed near the Dimona area where Israel’s nuclear site is located. No casualties or damage were reported (BBC, 22 April 2021).

In Iraq, unidentified militants fired five Katyusha rockets on the Balad Airbase in Sala Al Din. The attack wounded three Iraqi soldiers stationed at the base, as well as two foreign contractors. The base currently houses Iraqi forces and foreign contractors. No US or Global Coalition forces are stationed there (Al Jazeera, 18 April 2021). Later in the week, on 23 April, Camp Victory inside the Baghdad International Airport came under indirect fire. Several rockets landed inside the airbase, which houses Global Coalition forces. The rockets landed near the central prison, wounding an Iraqi soldier on guard duty (Garda World, 23 April 2021).

In Palestine, riots broke out in East Jerusalem (Al Quds) following a march by hundreds of far-right anti-Arab Lehava members, as well as ultra-Orthodox Jews, who chanted “Death to the Arabs” and attempted to reach Palestinian neighborhoods. Tensions were sparked in part by recent videos posted on social media by young Arabs showing physical assaults against ultra-Orthodox Jews (JNS, 27 April 2021). Rioters assaulted left-wing activists protesting against Lehava, and clashed with the police while trying to break through metal barricades erected to keep them from reaching the Damascus Gate. Water cannons, stun grenades, and mounted police were deployed to push the rioters back toward West Jerusalem (Associated Press, 24 April 2021).

Nearby, Palestinians held a counter-demonstration and also clashed with police forces. Over one hundred Palestinians were wounded in clashes, with several requiring hospitalization. One demonstrator was left with a head wound from border police gunfire (Haaretz, 22 April 2021). Palestinians have been assaulted by Israeli police on a nightly basis since the start of the Muslim holy month of Ramadan on 13 April. This comes after a controversial decision to prevent worshipers from gathering at the Old City’s Damascus Gate, a public area where Muslims traditionally gather after the daytime fast (Haaretz, 25 April 2021). East Jerusalem, occupied by Israel in 1967, has long been a center of conflict between Israelis and Palestinians (BBC, 23 April 2021). While Israel claims the whole city, including the occupied East Jerusalem, as its capital, Palestinians aspire to make East Jerusalem the capital of a future Palestinian state (Reuters, 24 April 2021).