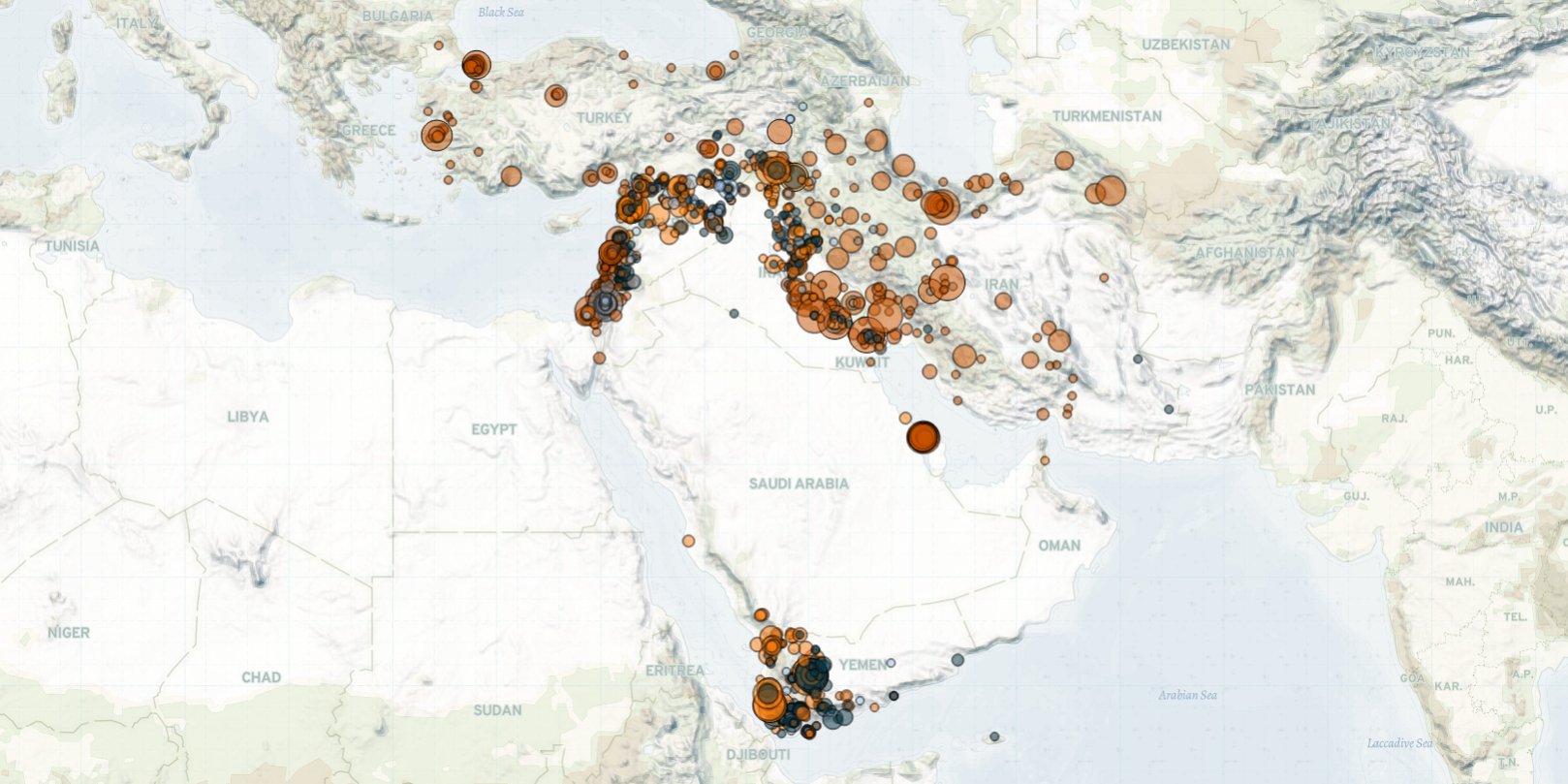 Last week in the Middle East, while Yemen’s Marib and Hodeidah governorates continued to be focal points of fighting, violence also significantly increased in Ad Dali governorate as Houthis launched an offensive against pro-Hadi and Southern Resistance forces. In Syria, three people were killed in a drone airstrike conducted by an unidentified armed group targeting an oil tanker off the coast of Banyas. Another unidentified drone attack killed a pro-Iran Fatemiyoun Brigade commander in Siyal. Elsewhere in the region, Turkish forces launched new operations against the Kurdistan Workers’ Party (PKK) in Northern Iraq. Riots were reported in Baghdad as demonstrators blocked roads and clashed with police forces over electricity supply problems. Lastly, violence continued in East Jerusalem, while Palestinian armed groups in the Gaza  Strip launched rockets into Israel, drawing retailitary airstrikes.

In Yemen, political violence increased 10% from the previous week, although it remained significantly lower than levels recorded since the beginning of February. The Marib and Hodeidah governorates continue to record the highest levels of violence, with both governorates accounting for approximately half of all violence in the country last week. In Marib, Houthi forces continue to push against pro-Hadi forces at the frontlines of Al Mashjah, Al Kasarah, and Al Tala Al Hamra, claiming to have gained control of a number of strategic locations (Yemen Press Agency, 27 April 2021). In neighboring Al Jawf governorate, fighting resumed last week with pro-Hadi forces making reported gains in the Nudhud front (Aden Al Ghad, 28 April 2021).

In the south, Ad Dali governorate saw an increase in political violence of over fivefold from the previous week, recording the highest number of incidents since the beginning of the year. This was sparked by Houthi offensives on pro-Hadi and Southern Resistance forces in the Qaatabah district. Meanwhile, public discontent is rising in Aden, where five out of ten demonstration events turned violent last week. Citizens are protesting the deteriorating services in the governorate, including the frequent power outages, and denouncing corruption in both the Hadi government and the Southern Transitional Council (Al Janoob Al Youm, 26 April 2021).

In Saudi Arabia, Houthi forces continued to target the country with bomb-laden drones last week, although the level of attacks remains quite low compared to earlier in April. An explosive-laden boat was notably intercepted by Saudi forces off the coast of Yanbu on 27 April in the first attack of its kind since December of last year (Reuters, 27 April 2021).

In Syria, clashes between the Internal Security Forces (Asayish) and the regime’s National Defense Forces (QDW) continued in Quamishli city of Al Hasakeh, though with less intensity than that seen in previous weeks. A Russian-brokered ‘permanent’ ceasefire was reached on 24 April, but has since been violated at least once. Despite the violation, the Asayish have been conducting daily patrols jointly with Russian forces in Al Tayy neighborhood.

Elsewhere in the country, an unidentified drone carried out an airstrike on a Beirut-registered oil tanker off the coast of Banyas in Tartous on 24 April. The attack reportedly killed three Syrians on board. Several sources suggest that the targeted ship was an Iranian tanker (Al Jazeera, 24 April 2021). Separately, an unidentified drone targeted the house of the pro-Iran Fatemiyoun Brigade commander and a military vehicle that was parked near the house in the town of Siyal in Deir-ez-Zor, killing the commander and wounding five fighters that were in the vehicle. Lastly, suspected Russian warplanes carried out airstrikes on opposition positions in the Ein Daqneh area in the northern Aleppo countryside. Russian warplanes were also suspected of conducting airstrikes in the vicinity of the Turkish base in Al Jahbal area in Ar-Raqqa’s Ein Issa, though no casualties were reported in either attack.

In Iraq, Turkish forces launched an operation named ‘Claw-Lightning’ and ‘Claw-Thunderbolt’ against PKK forces in Northern Iraq. The operation consists of a ground offensive with the participation of around 1,200 soldiers in Metina and Zap regions of Duhok province (TRT Haber, 24 April 2021). Airstrikes were also reported targeting these areas in addition to the Avasin and Qandil mountain regions of Erbil province. Turkish army artillery and unmanned aerial vehicles (UAVs) supported the operation (TRT Haber, 24 April 2021).

Elsewhere in Iraq, dozens of rioters blocked roads with burning tires in the Wahda neighborhood in the Karadah district of Baghdad. Clashes with police were reported while a police vehicle also rammed into the rioters, killing one and injuring several. The rioters demand improved services, especially the supply of electricity, and demand accountability for the deaths of several protesters in recent months (Al Sumaria TV, 24 April 2021).

In Palestine, tensions continued to be high for the second consecutive week in the West Bank. On 25 April, Israeli police removed the barricades preventing Muslim worshipers from gathering at the Damascus Gate in East Jerusalem (Al Quds), reportedly at the urging of the Shin Bet to de-escalate the tensions (Times of Israel, 26 April 2021). However, as Palestinians gathered the following nights at the gate to celebrate the removal of the barriers, police intervened forcefully to disperse the crowd, leading to renewed clashes.

Between 23 and 25 April, Palestinian armed groups in the Gaza Strip fired a total of 41 rockets into Israel, marking the largest barrage of rockets since 2018 (ECHO, 28 April 2021). The military forces of Israel retaliated with airstrikes. According to Israeli intelligence officials, the rocket fire was linked to the outbreak of violence in East Jerusalem, raising fears of a further escalation of violence in both the Gaza Strip and the West Bank (Haaretz, 25 April 2021).