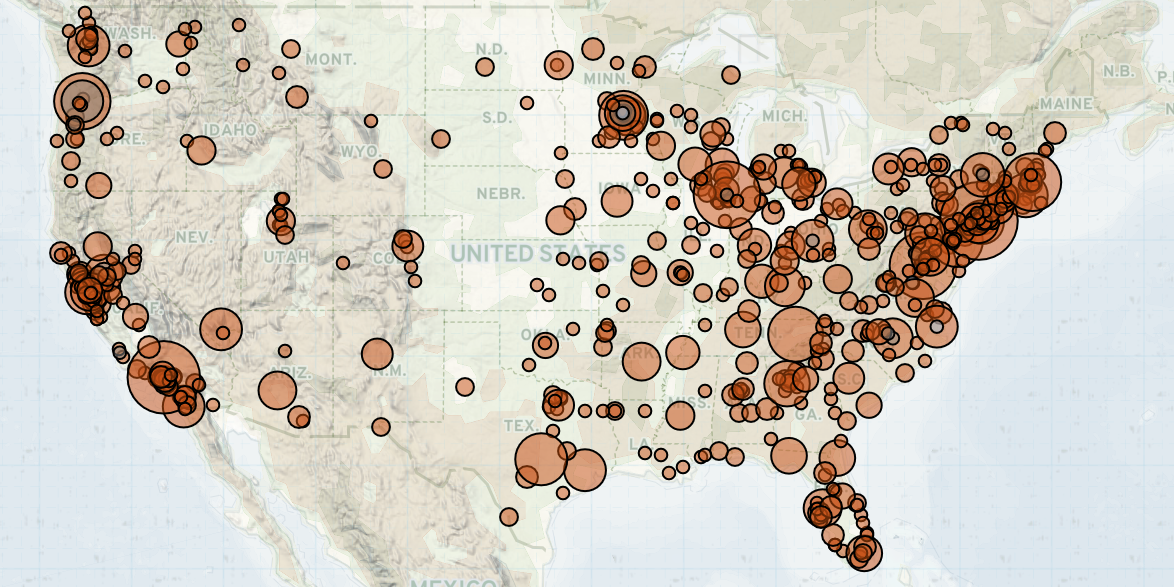 Demonstrations in the United States declined by a fifth last week compared to the previous week. The total number of events recorded last week, however, remains higher than average for 2021 following two weeks of significantly increased activity. The downturn relative to the week prior is primarily driven by a 56% decrease in demonstrations associated with the Black Lives Matter (BLM) movement. Despite the decrease, BLM demonstrations still accounted for over a quarter of all demonstrations reported last week. Stop Asian Hate demonstrations also continued, albeit at a fraction of levels seen in March, despite reports of continued attacks on Asian Americans (CNN, 5 May 2021; Washington Post, 5 May 2021). Additionally, multiple pro-Trump demonstrations were reported last week for the second straight week. Demonstrations related to the COVID-19 pandemic continued at a slightly increased rate compared to the week prior. Notably, reported militia activity remained low, yet included increased participation in demonstrations and an interaction with migrants along the US-Mexico border during a patrol.

Demonstrations associated with the BLM movement have continued in the wake of recent high-profile police killings of Black, Indigenous, and People of Color (BIPOC) individuals, including: Adam Toledo, Daunte Wright, Ma’Khia Bryant, Andrew Brown Jr., and Isaiah Brown. All demonstrations in support of the BLM movement were peaceful, with no reports of violent or destructive demonstrations last week. However, several demonstrations associated with the BLM movement were met by counter-protesters, including the Proud Boys (for more on the involvement of Proud Boys in demonstrations, see this ACLED actor profile). Additionally, police reportedly intervened against peaceful demonstrators in at least five instances. Notably, arrests of BLM demonstrators in Graham, North Carolina came after officers ordered protesters to disperse for not having a permit to protest — required under a recently updated city protest ordinance (News & Observer, 29 April 2021; Times News, 29 April 2021).

The local anti-protest laws in Graham follow a nationwide trend — more than 30 states have passed statewide ordinances since November 2016, in addition to a range of similar restrictions passed by local entities (International Center for Not-For-Profit Law, 4 May 2021). During the 2021 legislative session alone, lawmakers in 34 states have introduced more than 80 new anti-protest bills. Although the proposed legislation is purportedly meant to address violent riots, 97% of all demonstrations in these states have been peaceful — the same percentage recorded in states where no new legislation has been proposed (for more on anti-protest legislation and demonstration trends, see ACLED’s new fact sheet).

Multiple pro-Trump demonstrations were reported last week with crowd sizes ranging from hundreds to a thousand (TC Palm, 24 April 2021; Bradenton Herald, 25 April 2021). Moreover, former President Trump’s unsubstantiated ‘Stop the Steal’ claims of electoral fraud fueled the second largest rally since January: on 24 April, at least 300 Trump supporters held an ‘America First Rally’ in Vero Beach, Florida where participants repeated Trump’s fraud allegations and conspiracy theories (Treasure Coast Newspapers, 24 April 2021). On the same day, more than 1,000 people held a ‘Save America Rally’ in support of Trump in Bradenton, Florida, featuring former National Security Advisor General Michael Flynn (Bradenton Herald, 25 April 2021). The ‘Stop the Steal’ rallies first erupted in November 2020, but drastically decreased following the storming of the US Capitol on 6 January 2021 and the inauguration of President Joe Biden on 20 January 2021. The ‘Stop the Steal’ rally in Florida is the first reported since March and one of only seven since the inauguration. The revival came as Arizona embarks on a controversial recount of 2.1 million ballots from the 2020 election (New York Times, 25 April 2021).

Meanwhile, overall reported militia activity continued at lower levels last week than in weeks prior, though militia participation in demonstrations increased. In addition to countering protests associated with the BLM movement, Proud Boys were reported at an ‘Assemble for Freedom’ rally in Pennsylvania and at a QAnon-linked ‘Save the Children’ rally in California. Meanwhile, the American Contingency continues to conduct firearm training events, including pistol and carbine training, in several states, including: Arizona, California, Ohio, Pennsylvania, and Utah. Additionally, the Arizona Border Recon group reportedly patrolled an area south of Tucson near the US-Mexico border. During the patrol, the leader of the group followed and confronted a small group of Spanish-speaking men, offered them a ride, and proceeded to drive them to a Border Patrol unit (Arizona Border Recon, 28 April 2021).