ACLED has completed a review of the Lebanese news outlet El Nashra in a monthslong effort to improve coverage of political violence and protest throughout Lebanon. The data release has resulted in the addition of over 2,000 events to the ACLED dataset, accounting for approximately a fourth of the total events recorded between 2016 and 2021 across the country. While not altering underlying trends observed in previous analysis, this supplementation significantly enhances the disaggregation of the ACLED dataset, with more than 60 new locations now recorded as sites of political disorder in Lebanon. What follows is an updated assessment of recent trends in conflict and demonstration activity around the country.

The 2019 Uprising and Its Aftermath

In October 2019, a wave of demonstrations engulfed Lebanon for months. A peaceful protest movement started in Beirut, then spread throughout the country, with participants calling for long-awaited political and economic reforms. Lebanese Prime Minister Saad Hariri resigned days after the start of the uprising. Difficult negotiations to appoint Hariri’s successor ended only in December, when President Michel Aoun picked university professor Hassan Diab to form a technocratic government. By the end of January 2020, large-scale mobilization had dwindled and violent riots became more common (Reuters, 19 January 2020).

Additionally, Lebanon has been confronted with political paralysis after Prime Minister Diab resigned in the aftermath of the explosion. After a failed attempt to secure the post by ambassador Mustapha Adib, Saad Hariri staged a comeback as Prime Minister-designate in October 2020. Still, interparty vetoes and entrenched political and economic interests have thwarted efforts to form a new cabinet (Abi-Nassif, 28 January 2021). Amid this political bickering, the number of demonstrations recorded in the last quarter of 2020 was the lowest since the start of the uprising in 2019.

The Resurgence of Unrest in 2021

Since the beginning of 2021, Lebanon has experienced a significant surge of collective mobilization nationwide amid worsening economic conditions. The number of demonstrations recorded by ACLED in March 2021 was the highest since the onset of the popular uprising in October-November 2019. Unlike 2019, however, demonstrations have turned increasingly violent. While violent demonstrations constituted 16% of total demonstration events in 2019, they account for approximately a third of all demonstrations recorded thus far in 2021 (see figure below). 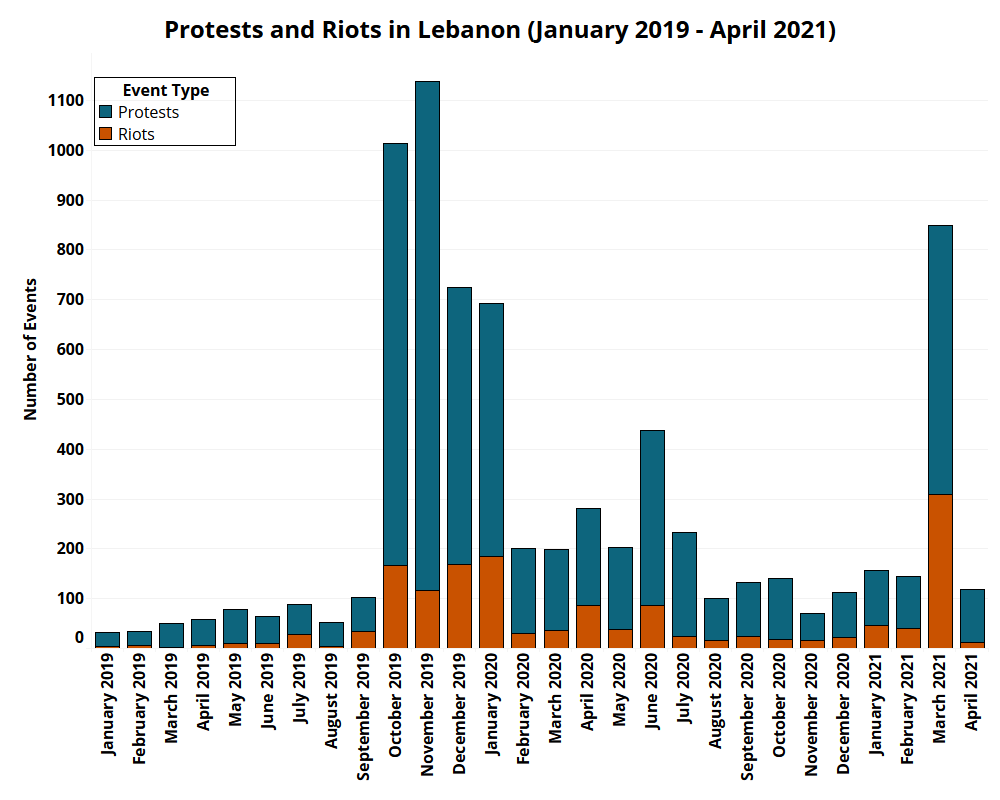 Notably, the spatial distribution of demonstrations reveals the nationwide character of the unrest. Lebanon’s most populous urban areas of Beirut (including the districts of Baabda, Aley, and Al Metn of Mount Lebanon governorate), Zahle, Tripoli, and Saida account for little more than half of all demonstration events in 2021, highlighting how political disorder has been widespread across the country.

Frustration at political inaction over an ever worsening economic crisis led demonstrators countrywide to block roads by setting dumpsters and tires on fire (Agence France Presse, 8 March 2021). With the Lebanese lira hitting an all-time low against the US dollar in early March 2021, reports of scuffles over subsidized food and of mobs storming supermarkets were widely circulated on social media (Middle East Eye, 5 March 2021; The National, 2 April 2021). Foreign currency reserves, estimated at $16 billion, are depleting, leaving the government at risk of being unable to pay for imports (Reuters, 26 March 2021).

The economic crisis has especially hit the country’s wasteful power sector. Power outages have been a common feature in postwar Lebanon, forcing families to rely on fuel generators for a few hours a day. Yet, with outages lasting up to 20 hours in the summer of 2020, generator providers have rationed power supply, plunging Beirut and other cities into darkness (The National, 28 July 2020). Early this year, Lebanon’s caretaker energy minister, Raymond Ghajar, a close associate of President Aoun’s son-in-law Gebran Bassil (European Council of Foreign Relations, 4 February 2020), warned that without financial guarantees, the state-owned electricity company may be unable to pay for fuel and provide power (Daily Star, 23 February 2021).

Political Violence and Threats to Freedom of Speech

The resurgence of unrest has raised new fears of a violent escalation resulting from the economic crisis. This is compounded by the simultaneous occurrence of political and social crises, along with geopolitical tensions. In Lebanon, this combination has historically been a prelude to conflict. “With or without civil war,” notes Lebanese historian Hicham Safieddine, “failing to solve the crisis along socially just terms will lead to increased forms of violence, ranging from petty crime to organized mafia-style management of scarce resources under sectarian protection” (Middle East Eye, 20 April 2021).

There are already signs of these trends on the rise across the country. Activists have denounced increased attacks on freedom of speech. In February, unidentified gunmen fatally shot Lebanese intellectual and Hezbollah critic Lokman Slim in the southern town of Saida. Police investigations have so far failed to identify any suspects, and there are concerns that Slim’s death could become yet another unsolved political assassination in recent Lebanese history (BBC, 4 February 2021). According to Samir Kassir Eyes Center for Media and Cultural Freedom, a Beirut-based media watchdog named after the journalist killed in 2005, nearly 200 media workers were assaulted by security forces and non-state groups between October 2019 and March 2021 while covering protests and the economic crisis (Majzoub, 4 May 2021).

Additionally, the economic crisis is putting a strain on Lebanon’s postwar clientelist system. Access to public services has long been subordinated to party or sectarian affiliation (L’Orient Le Jour, 30 January 2020; Assouad, 14 January 2021). Powerful families have thus exerted considerable influence in several parts of Lebanon by providing patronage to their clients. Recently, there were reports that political clans were hoarding Russian and Chinese COVID-19 vaccines to reward select members of their support base (Ansamed, 29 March 2021).

Competition over increasingly scarce patronage resources is likely behind mounting tensions between rival political parties (L’Orient Le Jour, 22 April 2021). In 2020, ACLED records over 100 political violence events in Lebanon, with an additional 40 reported between January and April 2021 (see figure below). In March 2021 alone, the Bachoura area of Beirut was the site of violent confrontations between militants of Amal and Hezbollah (Kataeb, 23 March 2021). Members of Walid Jumblatt’s Progressive Socialist Party (PSP) clashed with rivals both from the Lebanese Democratic Party over fuel filling in Aley (Murr TV, 21 March 2021) and from the Arab Unification Party in the Chouf (Lebanon24, 4 March 2021).

Personal disputes and feuds over drug smuggling are also driving clan-related violence. ACLED data reveal that the number of violent events involving clans has increased almost fourfold in 2020 compared to the previous year, with the trend continuing in 2021. The governorate of Baalbek-Hermel, home to several Shiite clans and a stronghold of Hezbollah (Al Sharq al Awsat, 21 September 2015), accounted for roughly half of all clan-related violence between January 2020 and April 2021. During this period, at least 25 people were reportedly killed in clan-related violence across the country. 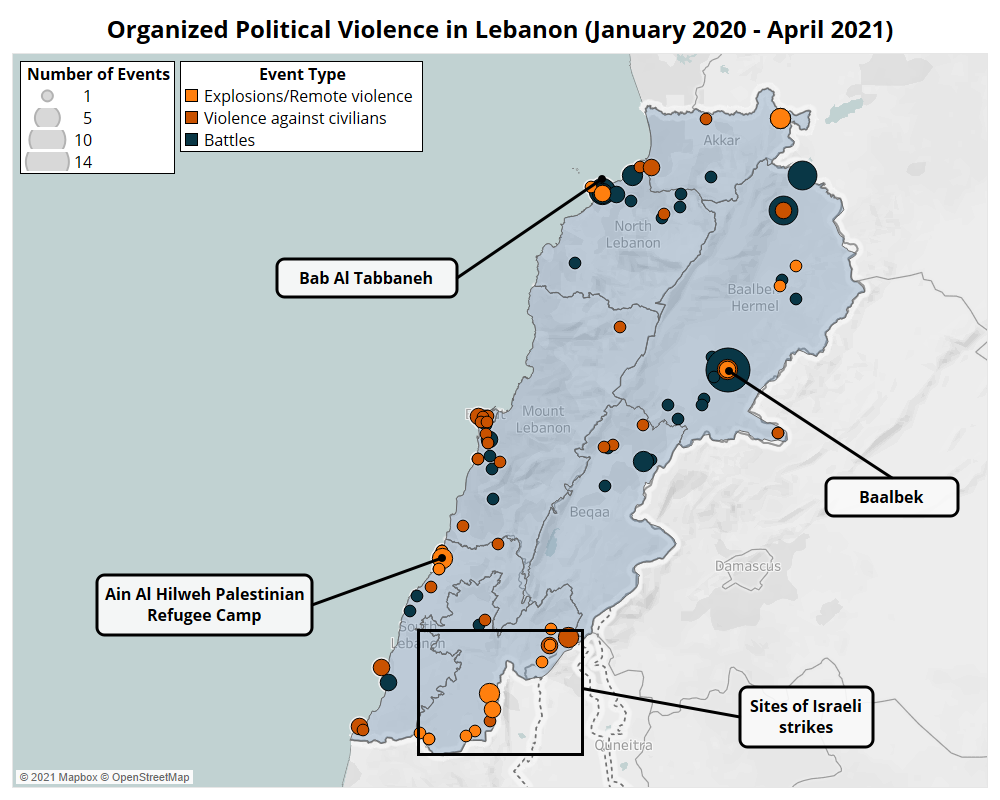 Lebanon’s monthslong political gridlock and economic meltdown have had catastrophic social consequences, with close to two million people estimated to be living in extreme poverty (World Bank, 12 January 2021). Eighteen months since the uprising began in October 2019, this has spurred a new bout of unrest. Unlike the peaceful mobilization that engulfed Lebanon in 2019, the recent turmoil is significantly more violent, a reflection of both increasing popular frustration with the country’s political elite and competition among political groups for increasingly scarce resources. In the absence of any political breakthroughs, heightened competition and popular frustration are likely to persist — and even escalate — in the coming months as Lebanon heads towards the general election in May 2022.