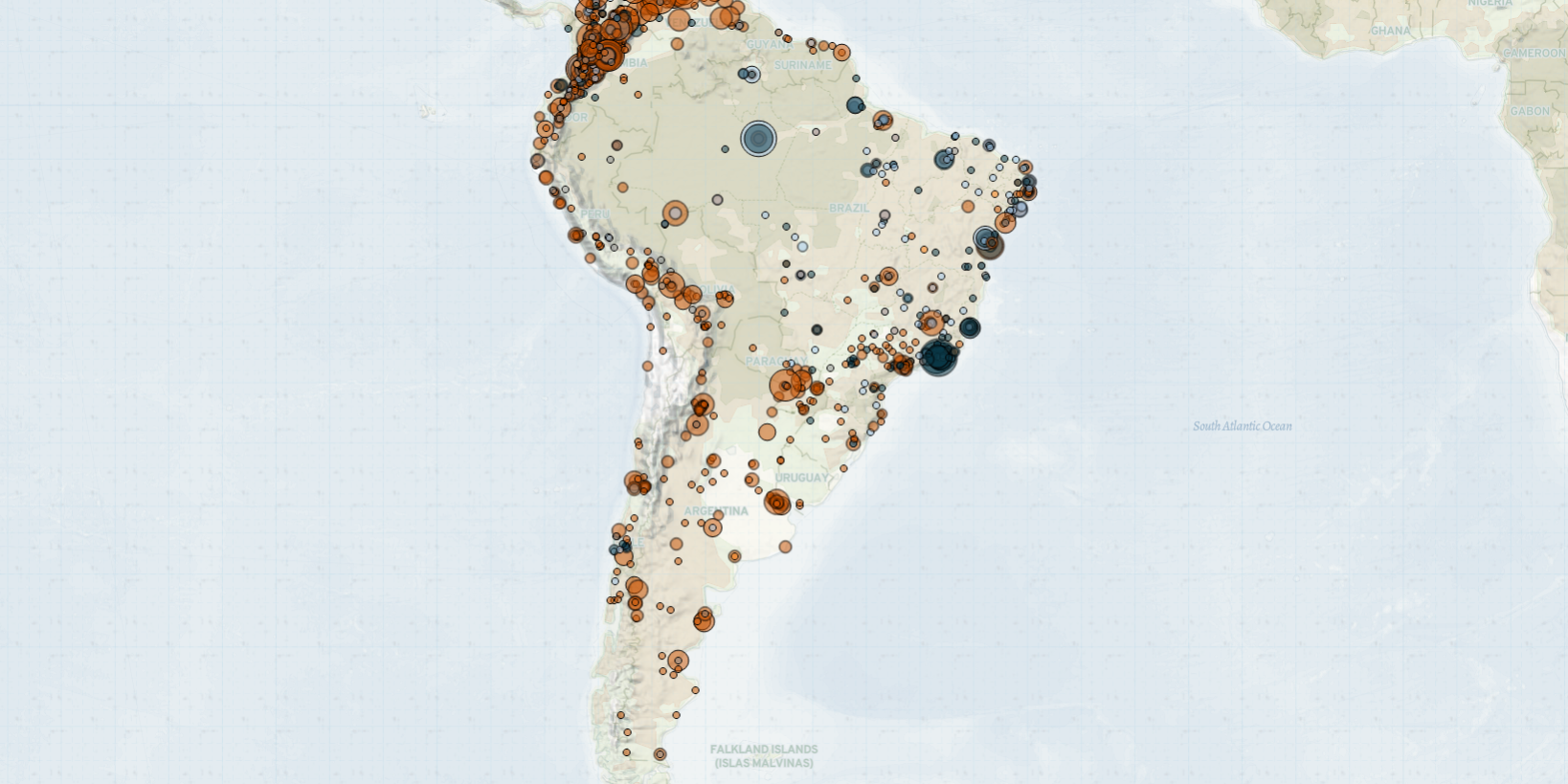 Last week in South America, nationwide protests continued to be held in Argentina in light of the government response to the second wave of the coronavirus pandemic. In Peru, 16 civilians were killed in an attack carried out by suspected members of the Shining Path, less than two weeks ahead of the country’s presidential run-off election. Colombia marked one month of demonstrations, including clashes with state forces. Additionally, in Colombia, dissident factions of the Revolutionary Armed Forces of Colombia (FARC) continued to clash against one another, leading to the mass displacement of civilians. Finally, in Brazil, violence increased in the Amapá state due to drug trafficking rivalries. Likewise, armed gold miners linked to organized crime groups continued to carry out attacks against indigenous communities.

In Argentina, citizens continued to take to the streets last week to express their dissatisfaction with the government’s mishandling of the coronavirus pandemic. In addition to demanding the re-opening of businesses, protesters drew attention to the economic crisis faced by the country, which has been exacerbated by the coronavirus outbreak (La Nación, 25 May 2021). Argentina’s economy has been in a deep recession since 2018 and, with the pandemic still raging, poverty has increased by more than one-third in the country (DW, 12 May 2021). With a population of more than 45 million, now more than 10 million citizens are in need of food assistance, compared to the previous 8 million before the outbreak (DW, 12 May 2021).

In Peru, suspected members of the far-left insurgency group Shining Path carried out a deadly attack against civilians in San Miguel del Ene village, Junin department, less than two weeks ahead of the presidential run-off election. Sixteen civilians, including two children, were killed in the massacre (Diario Correo, 25 May 2021). The group left pamphlets urging locals not to vote in the upcoming presidential election on 6 June 2021 between left-wing candidate Pedro Castillo and right-wing candidate Keiko Fujimori. They specifically request that people not vote for the latter, who is the daughter of former president Alberto Fujimori (El Comercio, 24 May 2021). The Shining Path, also known as the Militarized Communist Party, is the last remaining group from Peru’s guerrilla movement from the previous century, and was deeply influenced by the ideas of Mao Zedong (InSight Crime, 21 May 2021). The group lost most of its power in 1992 after its leader was killed in an attack launched by former president Alberto Fujimori. As of late, the group has been involved in drug trafficking activities and is active in the country’s coca-producing region (BBC, 25 May 2021).

Meanwhile, 28 May marked one month since anti-government demonstrations unfolded in Colombia. Last week, President Iván Duque issued a decree increasing militarization in the country’s southwest and in the Norte de Santander department in response to the ongoing demonstrations (Colombia Reports, 29 May 2021). Unrest has been most severe in the city of Cali, where roadblocks have halted food and fuel supplies and have forced some businesses to shut down. Furthermore, throughout the month, police forces responded violently to demonstrations; they are now under immense pressure over mounting evidence and testimonies indicating that demonstrators were executed and buried in mass graves (Colombia Reports, 24 May 2021).

Moreover, ongoing clashes continued to take place in the Nariño department between FARC dissident factions, namely the Oliver Sinisterra and Alfonso Cano fronts. The conflict has led to the forced displacement of more than 3,000 civilians from the rural area, giving rise to a humanitarian emergency (El Espectador, 27 May 2021).

Lastly, in Brazil, in the Amapá state, the son of a drug trafficking leader was killed by a rival group. This incident led to a series of clashes between rival drug trafficking groups in the region. At least 13 people were killed in a span of hours, significantly increasing violence in the state (Diario do Amapa, 24 May 2021). Likewise, conflicts in indigenous lands continued to unfold for the third consecutive week last week in Pará state. Armed gold miners, financed by organized criminal groups, set fire to the houses of Munduruku indigenous people in the city of Jacareacanga in Pará state (Amazônia Real, 26 May 2021). The attack was in response to a federal police operation being conducted to protect indigenous lands from illegal mining activities. The miners who perpetrated the attack are reported to be associated with the First Capital Command (PCC), the largest organized criminal group in the country (Amazônia Real, 10 May 2021).