The first installment in our new BLM State Spotlight series analyzes key trends in demonstrations associated with the Black Lives Matter movement — as well as the response from law enforcement and far-right actors — across California. Check the US Research Hub for upcoming installments and the latest data. For more on nationwide protest patterns, read our special report, A Year of Racial Justice Protests: Key Trends in Demonstrations Supporting the BLM Movement. 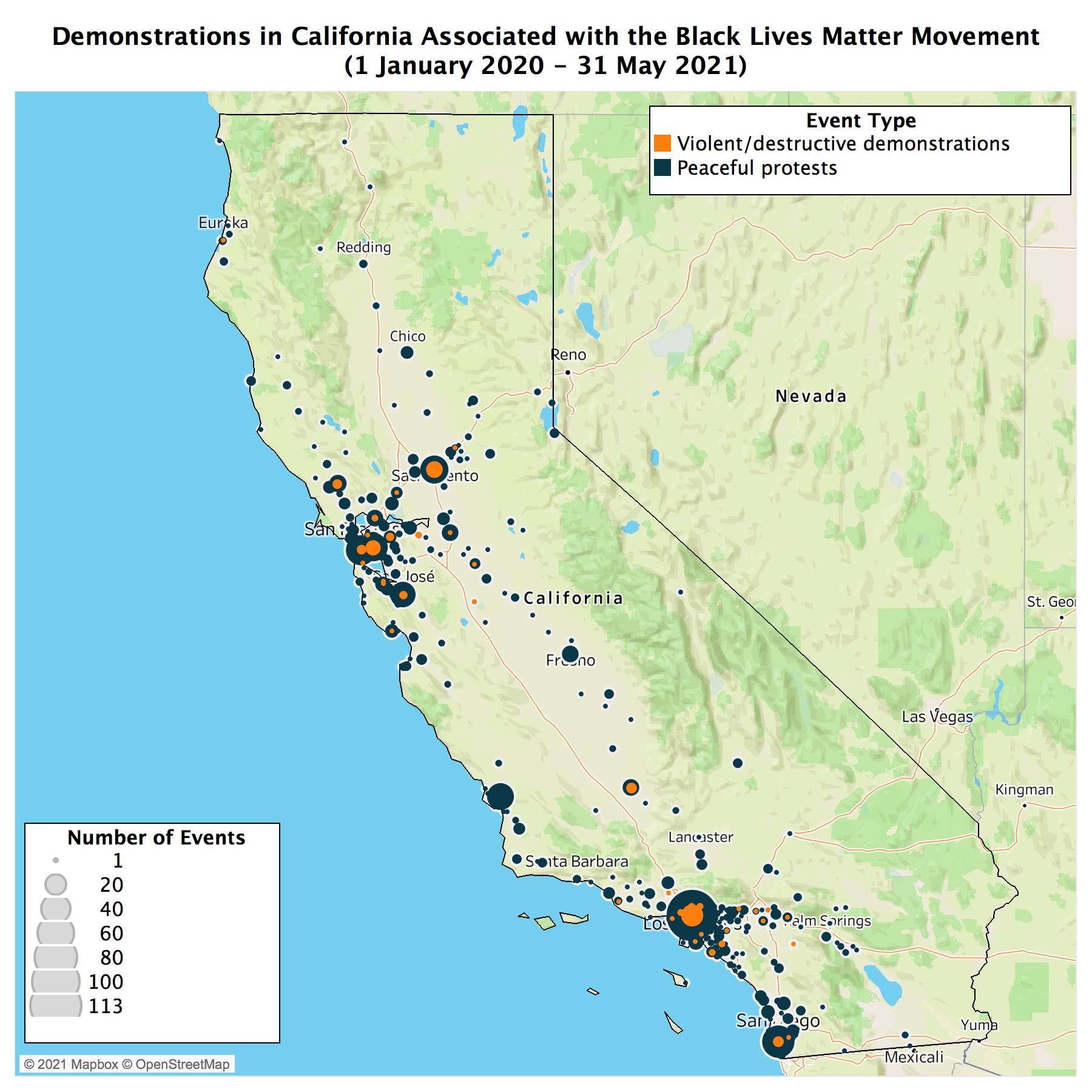 Approximately 13% of all pro-BLM demonstrations in California have been met with law enforcement intervention, which is 3% higher than the 10% national rate. This elevated level of intervention is largely driven by police in Los Angeles county and in the Bay Area — each accounting for nearly a third of all police interventions in the state, at 32% and 28%, respectively.

Heavy-handed engagement by law enforcement is correlated with higher rates of violent demonstrations.1 ACLED aims to code the most objective aspects of conflict and protest reporting, while limiting the more subjective aspects. The latter aspects — such as ‘who threw the first punch,’ for example — can be the most biased components of reporting. Limiting to the objective aspects — e.g. what occurred, who was there, where did it occur, when did it occur, was there any report of violence or destructive activity — allows for greater reliability of the data. This means, however, that it is not possible to determine who initiated the violence or destructive activity that might have happened at a demonstration using the variables that ACLED codes. When this information is available, it is included in the ‘Notes’ column of events. Users can review the ‘Notes’ to parse out such distinctions in certain events, but should remain cognizant of the fact that reporting on this point is often incomplete, and aware of possible bias in such reporting when included given its subjective nature. Both government and independent inquiries into the response to the BLM movement have found that police were inadequately trained, heavily militarized, and repeatedly used force without provocation (New York Times, 20 March 2021). In some cases, these reports indicate that aggressive police intervention and unwarranted use of force may have escalated otherwise peaceful protests into clashes and violence.

This trend is elucidated by the pronounced differences in county-to-county protest trends in California. For example, from 29 May to 2 June 2020, law enforcement in Los Angeles county alone reportedly arrested more than 4,000 individuals out of the 10,000 total arrests at demonstrations across the country (Los Angeles City Clerk, 10 March 2021; AP, 4 June 2020), with only 3-5% arrested for destructive activity like looting (Los Angeles Times, 6 June 2020). During that period, Los Angeles authorities intervened in over 30% of all pro-BLM demonstrations and used force nearly 60% of the time when they engaged, according to ACLED data. Police reported that over 3,500 rounds of 40mm less-lethal munitions and over 6,200 rounds of 37mm less-lethal munitions were not returned to their storehouses during this time frame, suggesting those rounds were fired at demonstrators (Los Angeles City Clerk, 10 March 2021). On 3 June 2020, the Los Angeles Police Department (LAPD) reportedly stopped using less-lethal munitions and significantly curtailed arrest campaigns (Los Angeles City Clerk, 10 March 2021). Following the LAPD’s decision to adopt less adversarial policing methods, demonstrations became significantly more peaceful. In the 362 days from 4 June 2020 to 31 May 2021, only 19 pro-BLM demonstration events were reported to have turned violent or destructive in Los Angeles county. In comparison, during the 10 days from 25 May to 3 June 2020 — when police may have fired approximately 10,000 less-lethal rounds and arrested over 4,000 people — 12 violent demonstration events were reported in the county.

Overwhelmingly peaceful demonstration rates in San Diego county provide further evidence of this trend. San Diego police have adopted a less combative approach to the protests, intervening in 8% of all pro-BLM demonstrations and using force in a third of these events. Under 5% of all demonstrations associated with the BLM movement in the county have turned violent or destructive.

While most demonstrations in both San Diego and Los Angeles have remained peaceful, the contrast between protest and policing trends in the two counties underscores the relationship between the use of force by authorities and violent demonstration activity. Pro-BLM demonstrations were twice as likely to involve violent or destructive activity in Los Angeles county, where police intervened in pro-BLM events at rates significantly higher than the national average. Conversely, police in San Diego county intervened at rates consistent with elsewhere in the country and used force when intervening at rates well below the national average.

In addition to law enforcement, actors affiliated with the far-right militia movement and right-wing street fighting groups also directly engaged with pro-BLM demonstrators throughout California. The Proud Boys were the most active of these groups, accounting for more than 60% of all such interactions, including in Los Angeles, Orange, Placer, San Diego, San Francisco, and San Joaquin counties.

The California State Militia, a California-based militia movement, has been directly involved in responding to rumors or planned pro-BLM protests, primarily through coordination with local police departments. According to a representative of the California State Militia, the Redding Police Department told the group that “if you guys hadn’t been there, we would’ve gassed them all,” pointing to both the police department’s readiness to use tear gas on pro-BLM protesters as well as the cordial relationship between the militia group and law enforcement (A News Cafe, 10 March 2021; Twitter @MilitiaWatch, 10 March 2021).

The State of Jefferson organization, an armed, militant right-wing secessionist group in the far north of California, has also taken part in opposing pro-BLM demonstrations in Redding (A News Cafe, 14 April 2021). For example, the group arranged pre-protest meetings in preparation for BLM-associated demonstrations in their area, with one organizer referring to planned protests as an “upcoming visit of some people from the city” (Medium @Sabine-Alexander, 1 April 2021). The State of Jefferson, like many other conservative activist groups in California and elsewhere, organizes around a litany of grievances, and anti-BLM politics has been a crucial mobilizing factor from summer 2020 to the present (New York Times, 21 April 2020; ACLED, 21 October 2020; High Country News, 27 July 2020; PEW, 4 February 2021). The campaign to recall California Governor Gavin Newsom represents another one of these points of convergence, bringing together militia groups, QAnon adherents, and many others from the state’s anti-BLM camp (LA Times, 23 January 2021; MilitiaWatch, 16 April 2021). An organizer for the California Revival PAC group, which is crucial to the Recall Newsom campaign, has previously described BLM activists as “vile, violent… the black version of the KKK” (Newsweek, 28 January 2021). The Shasta County Recall group has also described using armed militias as “security” for their meetings (A News Cafe, 20 April 2021).

California is additionally the location of a string of Boogaloo-associated shootings from 29 May through 6 June 2020, which killed two and injured three, as US Air Force Sergeant Steven Carrillo attacked police and security officers. After Carrillo was shot in a final standoff, he painted in his own blood the words “I became unreasonable” on the hood of a hijacked vehicle — a phrase often included in memes by Boogaloo adherents. Carrillo’s arrest has led to charges against multiple other Boogaloo actors, including members of the Northern California-based Boogaloo cell, the “Grizzly Scouts,” which has in turn led to further charges against other members of the cell (CBS 13 Sacramento, 13 April 2021; NBC News, 9 April 2021). The Boogaloo movement is oriented around a decentralized neo-Dadaist set of aesthetics and vague ideals that center on attempting to escalate and accelerate American politics towards a civil war that adherents believe to be on the horizon. The mass mobilization of pro-BLM protests following the killing of George Floyd, combined with direct calls for disempowering the police, may have led Boogaloo actors, such as Carillo, to opportunistically join these grievance-based mobilizations in an effort to catalyze direct, armed combat with the state (CNN, 16 June 2020).

In addition to far-right militias and militant street movements, unaffiliated sole perpetrators have also targeted pro-BLM demonstrators, especially through car-ramming attacks. California is home to the highest number of car-ramming attacks targeting pro-BLM demonstrations in the country, accounting for over 16% of these incidents. Car-ramming attacks are nearly twice as common in California as in any other state. Attacks have been dispersed throughout California, from Humboldt county in the north to Orange county in the south. More than half of these attacks occurred in cities within 65 miles of Los Angeles city limits. Although several incidents resulted in serious injuries to pro-BLM demonstrators, only one event, on 3 June 2020 in Bakersfield, was fatal (Global News, 7 June 2020).