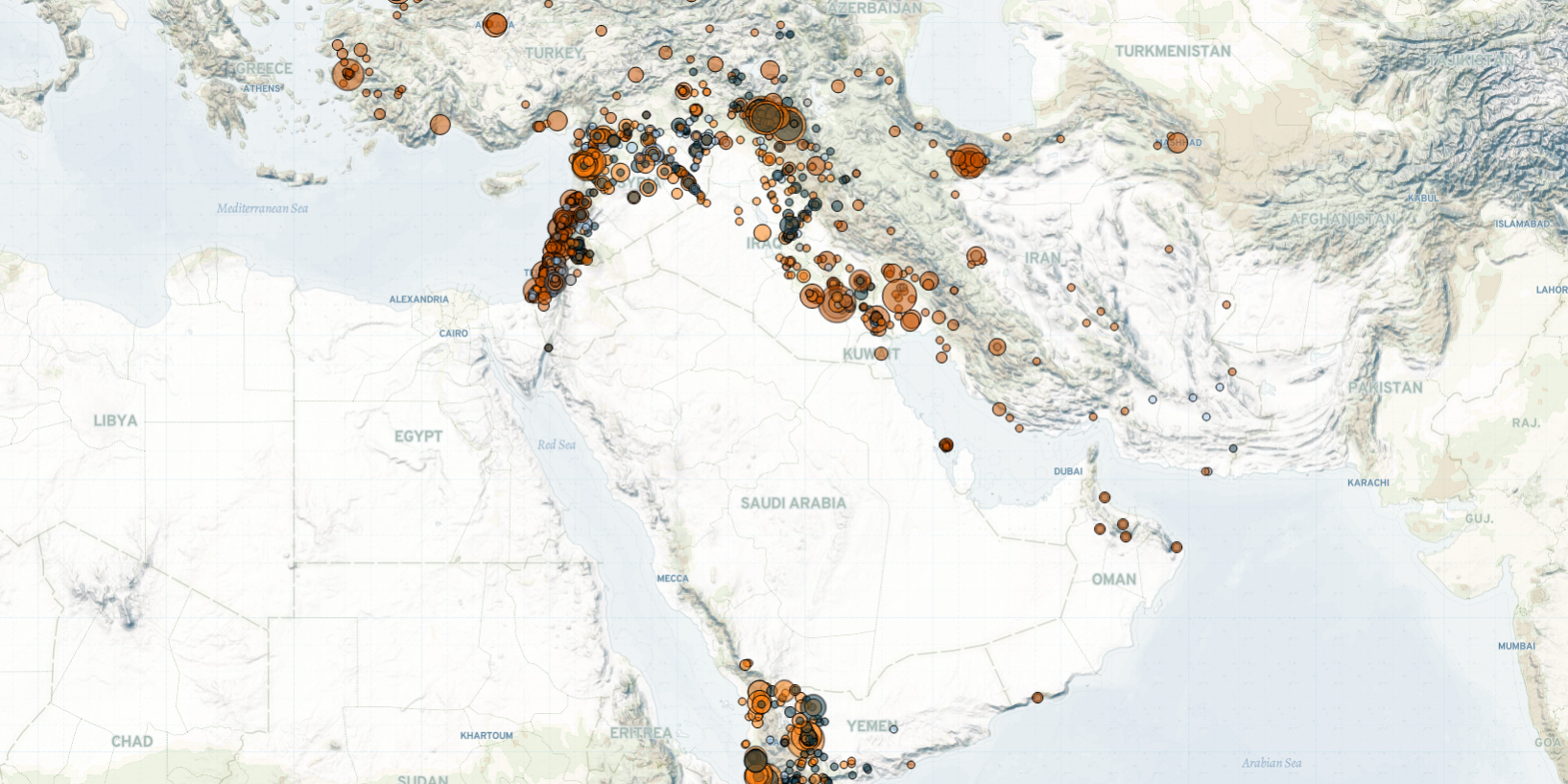 Last week in the Middle East, fighting between pro-Hadi and Houthi forces continued in Yemen’s Marib, while Al Qaeda in the Arabian Peninsula (AQAP) resumed its attacks in Al Bayda and Shabwah governorates. Elsewhere, Houthi forces intensified their attacks against Saudi Arabia. In Syria, over 20 people were killed when state forces shelled a hospital in Afrin city. In Iraq, an IED attack targeted a US logistical support convoy in Thi Qar, injuring several people. In Israel, a new government was sworn in, while violations of the ceasefire between Israel and Palestinian armed groups in the Gaza Strip were reported. Meanwhile, a new president was elected in Iran. Lastly, demonstrations broke out in Turkey, following the killing of a pro-Kurdish Peoples’ Democratic Party (HDP) member during an apparent nationalist attack.

In Yemen last week, political violence was at its lowest recorded level since the beginning of the year, decreasing in all governorates but Marib, Al Bayda, and Shabwah. Marib governorate, where political violence had decreased over the past few weeks, saw renewed armed clashes between pro-Hadi forces and Houthi forces west of Marib city, as well as sustained Saudi-led coalition airstrikes throughout the week. On 17 June, significant Houthi deployments were recorded in Sirwah and Marib districts, signalling a renewal of the offensive on Marib city (Twitter @abduljabbar1612, 17 June 2021).

In Saudi Arabia, Houthi attacks increased after four consecutive weeks of relatively low levels, targeting both Khamis Mushayt district and Abha airport in Asir province. These attacks are likely to continue and to increase, as they are framed in response to the actions of the Saudi-led coalition in Yemen (Ansar Allah, 14 June 2021). The announcement that the Saudi-led coalition made on 10 June that it would halt airstrikes in the country to “[prepare] the political ground for a peace process” completely failed to materialize last week (Al Jazeera, 10 June 2021).

In Syria, regime forces shelled Al Shefaa hospital in Afrin city, Aleppo province, killing 21 people, including two Sultan Suleiman Shah Brigade fighters and a commander, as well as a National Police officer. Seventeen civilians were killed in the attack, including children, women, paramedics, and a doctor (Al Jazeera, 13 June 2021). Regime attacks on areas controlled by Turkey and aligned opposition groups are uncommon. In the Idleb enclave, however, such attacks are a daily occurrence. In Idleb’s Kafr Lata, a civilian was killed in regime artillery and rocket shelling while two were killed by a Russian airstrike in Mantaf.

In southern Syria, Israeli forces targeted a regime forces observation post in Al Qahtaniyah area of Quneitra province with an explosive device on 17 June. The post is also reportedly used by Hezbollah. Two regime soldiers were reportedly wounded. In Nawa in Dar’a, unidentified gunmen attacked regime forces positions and various security branches, though no fatalities were reported in the attacks.

In Iraq, unidentified militants detonated a roadside IED targeting a logistical supply convoy servicing US forces on the Nassriya highway in Thi Qar. The contractor and the drivers were Iraqi. The blast, however, injured a foreigner, two Iraqis, and three members of the team protecting the convoy. Roadside attacks targeting Coalition convoys in Iraq are an almost daily occurrence, but rarely result in casualties (Shafaaq News, 13 June 2021).

In Israel, Naftali Bennett — the leader of the right-wing nationalist Yamina Party — was sworn in as prime minister on 13 June, ousting Benjamin Netanyahu after 12 years in power. Bennett’s new coalition government spans eight far-left to far-right parties, and also includes an Arab Muslim party. He will remain in office until August 2023 before the leader of the centrist Yesh Atid party takes over the premiership. The new patchwork Israeli coalition government is expected to prioritize domestic economic and social issues rather than peace negotiations with Palestine, which could expose internal rifts (Al Jazeera, 14 June 2021). Bennett is a supporter of Jewish settlements and has longed opposed a Palestinian state (Jerusalem Post, 14 June 2021).

On 12 June, over a thousand people marched towards Balfour Street and the Prime Minister’s official residence in Jerusalem for a final anti-Netanyahu protest before the new government was sworn in, with smaller numbers also gathering across the country (Jerusalem Post, 12 June 2021). The Black Flag movement, which has led protests against Netanyahu over the past year, has welcomed the change in the government (Times of Israel, 14 June 2021), although many protesters are believed to be unhappy with the new Bennett-led government (Haaretz, 13 June 2021).

In another development, the Israeli military struck Hamas positions in the Gaza Strip on 16 and 17 June, after incendiary balloons were launched into southern Israel, causing several fires. This marks the first violation of the ceasefire between the two sides, which came into effect on 21 May. The minor flare-up of violence comes after thousands of right-wing Israelis marched in a flag-waving procession through East Jerusalem on 15 June, shouting “Death to Arabs” and cursing the Muslim Prophet Mohammed (NBC, 15 June 2021). At least 33 Palestinians were injured as Israeli police used rubber bullets and live ammunition to keep the counter-demonstrators away from the march.

In Iran, presidential elections were held on 18 June. The hardline conservative judiciary chief Ebrahim Raisi was announced as the winner following a vote marked by low turnout, amid the disqualification of moderate candidates and voter apathy fueled by the poor state of the economy (AP, 18 June 2021). The new president, who is a close ally of Iran’s Supreme Leader Ali Khamenei, will take office in August. Some analysts suggest that Raisi will serve as an “executive officer” for Khamenei, who will take an even greater role in driving the country’s domestic and foreign policies (BBC, 22 June 2021).

Lastly, in Turkey, at least 30 demonstration events were held across the country after an attack on the pro-Kurdish HDP’s provincial office in Izmir, which led to the death of a female party member. The assailant had previously posted photos on social media with an ultranationalist hand gesture associated with the Grey Wolves, a far-right militia group (SCF, 22 June 2021). The HDP and other opposition groups blame the government for demonizing and spreading hatred against the party to consolidate their nationalist voter base (Bianet, 17 June 2021).