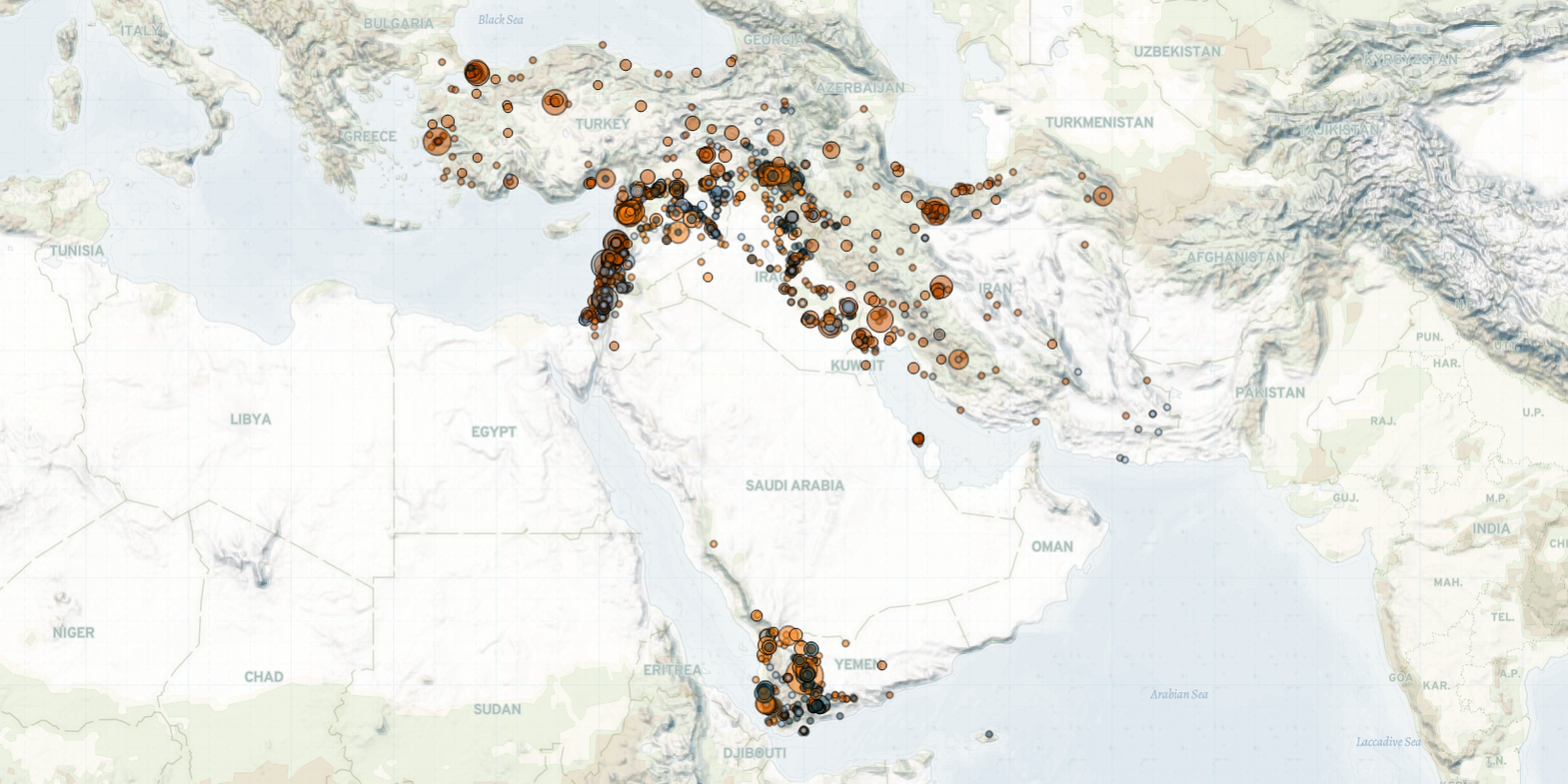 Last week in the Middle East, intense clashes in Al Bayda governorate in Yemen resulted in the most violent week ever recorded by ACLED in the governorate. Meanwhile, tensions between the Southern Transitional Council (STC) and the Hadi government remain high in Southern Yemen. In Saudi Arabia, no Houthi attacks were recorded for the first week since January 2021. In Iraq, unidentified militants launched two rocket attacks against US forces at the Ain Assad air base in Erbil. In Syria, Russian airstrikes in Idlib province damaged a water pumping station and a Civil Defence center. A large demonstration was held in Turkey against the prosecutions of pro-Kurdish Peoples’ Democratic Party (HDP) members. Meanwhile, protests against widespread power outages broke out in Iran, while fuel and medicine shortages led to mob violence events in Lebanon.

In Yemen, a pro-Hadi offensive on Houthi-held territory in Al Bayda governorate last week underpinned the most violent week ever recorded in the governorate since the start of ACLED coverage in 2015. Armed clashes were concentrated in the southeastern districts of Al Bayda, Az Zahir, As Sawmaaah, and Dhi Naim, with Hadi forces supported by the Saudi-led coalition, the Giants Brigades, and Al Humayqani tribesmen. Significant pro-Hadi advances were recorded throughout the week. However, Houthi forces claim to have reversed a number of those gains in a large counter-offensive, notably by recapturing the entirety of Az Zahir district (Ansar Allah, 9 July 2021).

In Marib governorate, political violence decreased considerably last week, most likely as a direct result of the Al Bayda offensive. As anticipated (ACLED, 7 July 2021), the Al Bayda offensive has likely forced Houthi forces to divert their war effort from Marib, where they had launched a renewed offensive in late June.

In Southern Yemen, demonstrations sponsored by the secessionist STC took place in several governorates to commemorate the victory of northern forces over southern forces in 1994, dubbed as “Southern Invasion Day” (South24, 6 July 2021). In Shabwah, several of these demonstrations were met with harsh repression from pro-Hadi security forces affiliated with the Islah party. Although the Saudi government recently reaffirmed both parties’ commitment to ensure peace in Southern Yemen (Arab News, 2 July 2021), tensions between the STC and the Hadi government continue to grow.

In Saudi Arabia, no Houthi attacks were recorded last week, for the first time since January 2021. As with the decrease of political violence in Marib, this is likely the result of the redeployment of Houthi resources to counter the pro-Hadi offensive in Al Bayda.

In Iraq, US and Coalition forces faced several attacks by unidentified militants in Erbil, Baghdad, and Anbar provinces. On 5 July, unknown militants targeted US forces with a rocket attack on Ain Assad air base in Anbar. The rockets fell in the air base, though no casualties were reported. On 7 July, militants launched around 14 rockets targeting the same airbase and injured two American servicemen. The rockets were launched from a remote launch platform disguised as a food truck in the Moassasa area of Al Baghdadi district in Anbar. The Coalition conducted counter-battery fire, which, according to local sources, destroyed the launch platform; damaging a mosque, shop, and civilian vehicle; and setting four civilian residences on fire (Shafaq News, 7 July 2021). Elsewhere, on 6 July, unknown militants targeted US forces stationed at Erbil International Airport with a kamikaze drone. Neither fatalities nor injuries were reported, but air traffic was suspended and some structures at the airport caught fire. In Baghdad, on 5 July, unknown militants targeted the US embassy in the Green Zone with drones and rockets, though the embassy’s air defense system intercepted the attacks (Reuters 8 July 2021).

In northwest Syria, Russian warplanes carried out airstrikes on the water pumping station in Al Rouj plain in Idleb last week. The station, which was completely destroyed in the attack, served over 3,500 hectares of farmland in the area (The Guardian, 3 July 2021). Further Russian airstrikes were reported on Sheikh Yousef and Joseph towns in the Idleb countryside. In Sheikh Yousef, a Civil Defence center was targeted, rendering it inoperable. Meanwhile, clashes took place between opposition rebels and the Peoples’ Protection Units (YPG) along several fronts in the northern and eastern Aleppo countryside. Turkish drone strikes were reported on the YPG-controlled Menagh airbase.

In Dar’a governorate, southwestern Syria, the 8th Brigade, which operates under the Russian-backed 5th Assault Corps, clashed with unknown gunmen in Mataeiyeh town last week. A brigade commander was killed along with another fighter. The clash came after the 8th Brigade raided houses in town, in an attempt to detain wanted individuals. The following day, members of the 8th Brigade arrested dozens of young men in the town and set civilian houses on fire.

In Turkey, one soldier was killed, and three others were wounded when unidentified Syrian militants opened cross-border fire at a Turkish border patrol vehicle in Senyurt, Kiziltepe district. The last such attack took place in April 2019, when Syrian militants targeted a Turkish border post in Asagipulluyazi and killed a soldier. Meanwhile, thousands of protesters gathered for a protest organized by the HDP in Konak town, Izmir (ANF, 8 July 2021). Protesters chanted against the government’s ongoing persecution of HDP members and the 17 June nationalist attack on the party’s office in Izmir, in which one member was killed. The protesters call for a peaceful resolution of the Kurdish-Turkish conflict and condemn the government’s decision to withdraw from the Istanbul Convention to prevent and combat violence against women and domestic violence.

Last week in Iran, over 40 protest events were reported over widespread electricity outages. The government blamed the blackouts on increased consumption, a near-halt in hydropower production due to drought, and illegal cryptocurrency mining farms (Jerusalem Post, 7 July 2021). In addition, more than 20,000 striking full-time, temporary, and contract workers, employed by subsidiaries of the Ministry of Petroleum and the National Iranian Oil Company, continued their strike for a third week in at least eight provinces, demanding better wages and days off.

The number of protest events in Lebanon against deteriorating economic and living conditions unexpectedly fell significantly last week, compared to the week prior. Despite the falling number of events, fuel and medicine shortages led to citizens storming medicine warehouses and clashing at gas stations last week. Owners of pharmacies across Lebanon also went on strike amid the medicine shortage, demanding that the Central Bank financially support the import of vital medicines (Arab News, 5 July 2021). The World Bank has described the situation in Lebanon as one of the worst economic crises globally since the 1850s (France24, 9 July 2021).